Alternative investments (“alts”) have spent years in the wilderness but now, with the plunge in equity values, advisors are giving nontraditional exposures a second look. 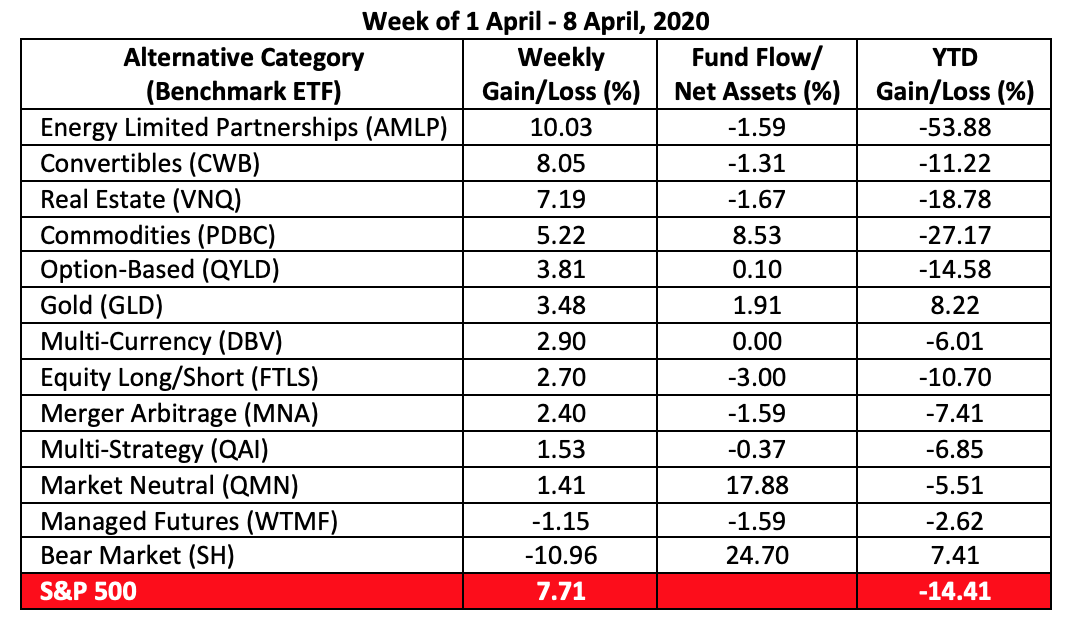 AMLP gained more than 10 percent for the week, outstripping the S&P 500’s advance by more than two percentage points. AMLP tracks a cap-weighted index of master limited partnerships (MLPs) focused on processing and transportation of petroleum products and natural gas. The fund’s emphasis on “midstream” operations provides some insulation from commodity price volatility, but its revenue stream can vary significantly with changes in transport volume.

Nearly $70 million flowed out of the fund on a net basis over the past five trading days, about 1.6 percent of AMLP’s asset base. For the year, the fund’s witnessed a net outflow exceeding $375 million.

Because of AMLP’s volatility, its value as a portfolio diversifier is rather limited. This year, a 10 percent allocation to AMLP within a balanced portfolio would have yielded a 1.11 diversification ratio.

As modest as AMLP’s diversification benefit is, it’s still better than the 1.04 ratio earned by the second-place CWB fund. CWB attempts to replicate the performance of a market-cap weighted index of U.S. convertible securities with an outstanding issue size greater than $350 million.

CWB’s net outflow for the week, 1.3 percent of its assets, was more modest than AMLP’s. This year’s seepage has totaled $434 million for the convertibles portfolio.

The week’s worst performance -- as poor as AMLP’s was good -- was staged by a bear market portfolio, the ProShares Short S&P 500 (NYSE Arca: SH). SH is unlevered, offering 100 percent of the inverse daily gain or loss in the S&P 500, so it’s essentially a one-day bet. Holding the fund for more than a day compounds the quotidian returns. You can see this effect by comparing SH’s weekly return to that of S&P index in the table. The disparity is magnified for the year-to-date period.

What makes SH stand out this week, aside from the weakness in its share price, is its large inflow. Share creations represent nearly a quarter of the fund’s net asset value. For the year, net inflows total more than $2 billion.

There’s another way in which SH distinguishes itself. While the technical picture for AMLP and CWB is weak, there’s room for another 30 percent gain in SH’s share value. Whether investors and the market make SH take up that room, of course, remains to be seen.