Cyclicals Outdid Defensives, Until They Didn’t

A couple of years ago, singer-songwriter Luke Combs released an album containing a tune entitled “Be Careful What You Wish For.” I thought back to that lyric after reviewing messages sent from readers inquiring about the tradability of an ETF spread frequently referenced in this column.

The spread is the price ratio of the Consumer Discretionary Select Sector SPDR (NYSE Arca: XLY) over the Consumer Staples Select Sector SPDR (NYSE Arca: XLP). We use the ratio as an indicator of investor enthusiasm and confidence in large-cap stocks. The ratio increases when investors feel flush and declines as a more defensive mood takes hold. Turning points in the ratio often precede significant peaks and valleys made in the S&P 500.

One such pivot appeared to be shaping up late last year as equities tumbled and bucked in a holiday melée. There’s now a series of lower highs in the indicator that can be connected to form a declining trendline (the thin, solid red line in the chart below). There’s also been a couple of higher lows that could, if followed by at least one more, scribe an upslope (seen as the chart’s thin, dashed red line). If this pattern is completed, there’s a reckoning ahead. A breakout from the ever-shrinking congestion area suggested by the resulting triangle. 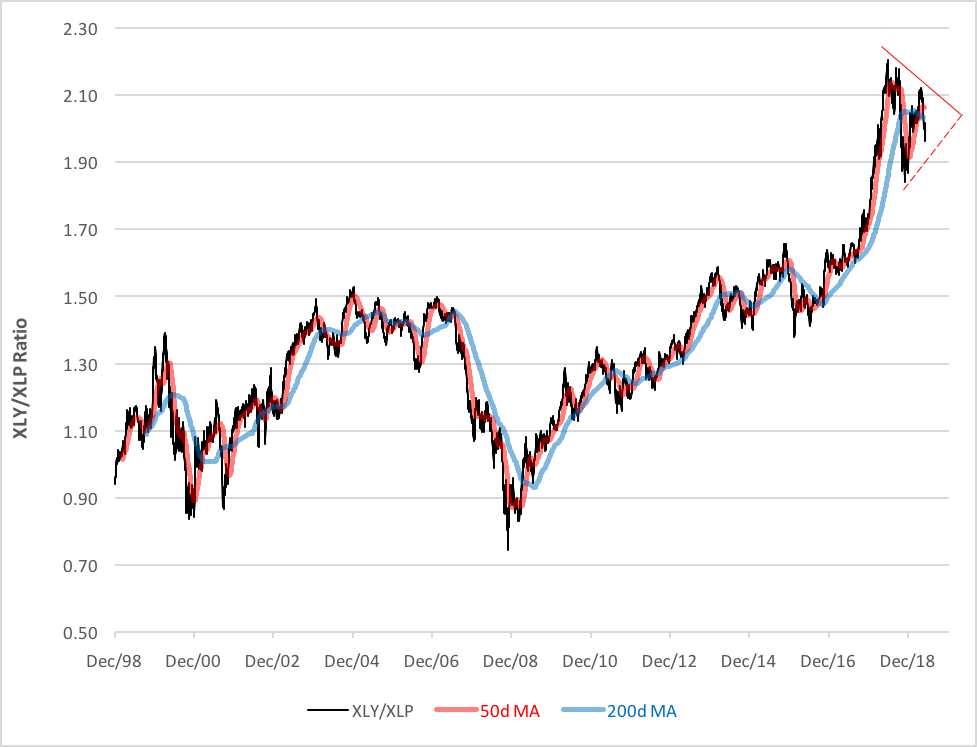 We addressed a possible destination for the ratio (and, implicitly, a trajectory for the S&P 500) in one of our October columns. In that column, we commiserated with readers who were looking for a way to trade the ratio. There was no ETF tracking the ratio at the time. There still isn’t, but there is a recently launched ETF that gets close.

Unlike our simple XLY/XLP ratio—nominally a 1:1 proposition limited to consumer stocks—RWCD achieves a net 100% exposure to the entire spectrum of large-cap stocks (at each monthly rebalancing) by leaning 150% bullish on the cyclical sectors, in part financed by a 50% short in defensive stocks. RWCD was launched alongside a complementary portfolio, the Direxion MSCI Defensives Over Cyclicals ETF (NYSE Arca: RWDC), which employs the same levered technique as RWCD, but in the reverse. 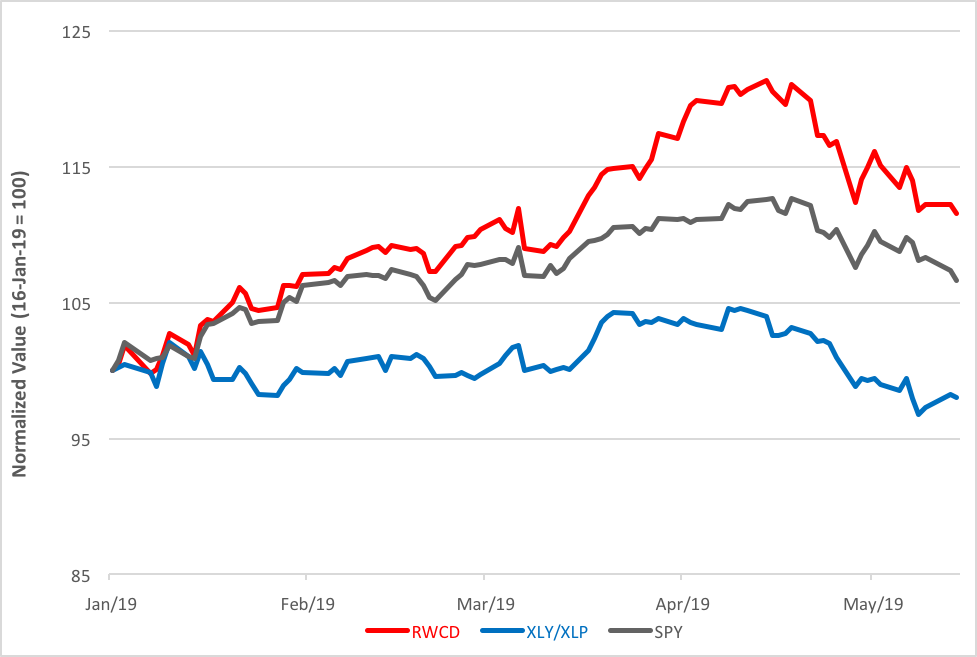 Since inception, RWCD’s pulled down a 0.69 correlation coefficient versus the XLY/XLP ratio. Not a perfect fit, but nothing to sneeze at either. More important is the ETF’s link to the SPDR S&P 500 ETF (NYSE Arca: SPY). The XLY/XLP ratio’s correlation to the index tracker is 0.55, while RWCD earns a 0.91 coefficient.

This makes sense since the Direxion strategy aims for a net 100% exposure to the large-cap market. Conversely, the XLY/XLP ratio’s more market-like when it comes to volatility. RWCD’s annualized standard deviation is 15.93%. SPY’s volatility weighs in at 11.37%, quite close to the ratio’s 11.64% reading. This also makes sense. The XLY/XLP ratio is an indicator of potential changes in the broad market ahead, not a mirror of the S&P’s current activity. The ratio’s value is in its divergence with the S&P.

Volatility, of course, is an investor’s bugaboo. It’s a boon companion when the market’s on the rise, but a real monster on the downside. Last month, the cyclical sectors—particularly technology—got kinetic and pushed RWDC’s share price up nearly 7%. In May, that gain was wiped out, and then some, as investor demand in the cyclical sectors waned.

So, now there’s finally a way to trade in the same direction as the XLY/XLP ratio. A pretty volatile way. Be careful what you wish for.