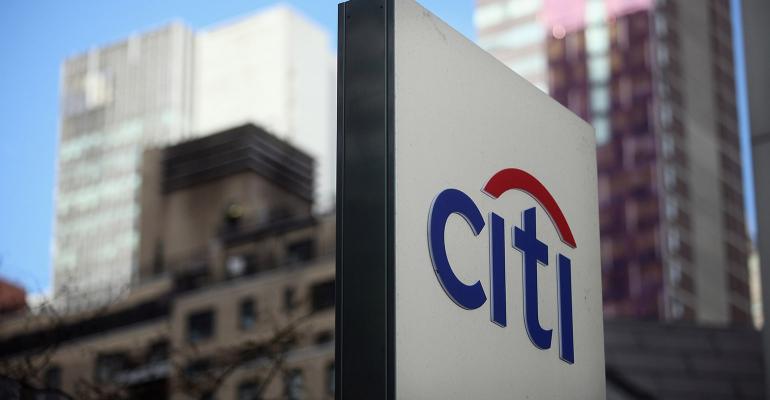 One division will cover global fixed-income and currencies beta trading, another will focus on global ETF research and a third will manage regional ETF sales and business development.

(Bloomberg) --Citigroup Inc. has created three new business units to meet demand for passive investments such as exchange-traded funds, according to a copy of a memo seen by Bloomberg.

One of the divisions will cover global fixed-income and currencies beta trading, another will focus on global ETF research and a third will manage regional ETF sales and business development, the memo said. James Griffiths, a spokesman for Citigroup in Hong Kong, declined to comment.

Citi’s expansion plans show the increasing stakes in a $4 trillion industry where assets are at a record amid demand for low-cost investments and after poor performance by actively-managed funds. Global ETF assets are expected to exceed $7 trillion by 2021, according to PricewaterhouseCoopers LLP. Bond ETFs have more than $700 billion under management, and are growing faster than all asset classes except commodities.

“One of the most significant trends facing our industry is the shift from active to passive investing,’’ Paco Ybarra, global head of markets and securities services, said in the memo. “This trend is central to our client franchise because we serve both the biggest users and the biggest issuers of ETFs.’’

Global fixed income and currencies beta trading will be led by Jay Mann, who will report to New York-based Vikram Prasad. Regional ETF sales and business development for Europe, the Middle East and Africa will be led by Chris Gooch, reporting to Conor Davis, the memo said. Global ETF research will be led by Scott Chronert reporting to Jon Rosenzweig. The U.S. bank expects to add headcount to the research operation, according to a separate memo seen by Bloomberg.

“We believe that ETFs will become part of the toolkit for every asset class and these organizational changes are a crucial step in positioning Citi at the forefront of this trend,’’ said Ybarra.