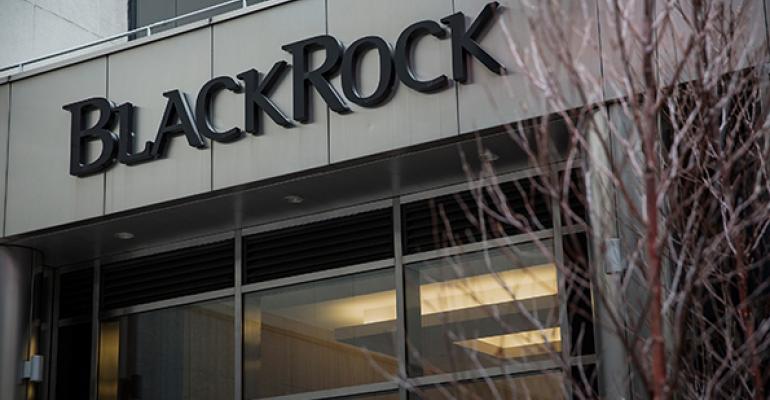 The company has been able to remain the top seller of U.S. ETFs while fending off Vanguard and shielding much of its business from the punishing effects of price competition.

What he didn’t mention was that prices weren’t changing on most of BlackRock’s ETF assets -- where fees remain far higher for institutional buyers who crave easy-to-trade securities. The discounts are aimed at retail customers and financial advisers who mostly seek  cheap funds.

BlackRock is basing its pricing on the idea that not all ETF buyers are the same, and the strategy seems to be working. BlackRock attracted a  record $64.5 billion into its iShares products during the first quarter, with money going into both types of ETFS.

The company has been able to remain the top seller of U.S. ETFs while fending off Vanguard and shielding much of its business from the punishing effects of price competition.

“By skill or luck, they have pulled it off,” said  Dave Nadig, chief executive officer of San Francisco-based research firm ETF.com. “If you are BlackRock you have to be happy.”

Still, BlackRock isn’t immune to price pressures. Over the past year, its revenue grew more slowly than its assets, reflecting the squeeze on fees across the fund industry.

IShares is the largest force in the expanding market for ETFs, which generally track indexes while trading all day like stocks. U.S.-listed ETFs have attracted $154 billion in cash this year, with BlackRock hauling in the most, followed by Vanguard, the second-biggest provider by assets.

“Investors continue to gravitate to low-cost funds and ETFs,” said Freddy Martino, a spokesman for Vanguard. “At Vanguard, they can be assured of complex-wide low costs all the time.”

Five years ago, BlackRock was losing market share to Vanguard, whose focus on cost-conscious advisers building efficient portfolios paid off as the indexing wave took hold. Vanguard was the top ETF seller in 2010 and 2011.

BlackRock’s response then was to introduce the core funds in 2012 with lower fees than its traditional funds. For example, the iShares MSCI EAFE ETF, which tracks stocks in Europe and Asia, carries an expense ratio of 33 cents for every $100 invested, while the iShares Core MSCI EAFE ETF charges 8 cents. Across the lineup, the core ETFs charge an average of 10 cents, compared with 38 cents for the older funds, according to data compiled by Bloomberg. The core ETFs have about $300 billion in U.S. assets and are growing at a quicker clip than the non-core funds. Importantly for BlackRock, the success of the core ETFs hasn’t killed the higher-priced business, whose roughly $800 in billion in assets remain the key driver of iShares revenue. In the first quarter of 2017, BlackRock’s traditional U.S. ETFs attracted $24.3 billion compared with $28.8 billion for the core ETFs, according to data compiled by Bloomberg.

Institutions such as hedge funds have stuck with the pricier ETFs because they treat the products as trading vehicles. They may be betting on market direction, as many did after the election of Donald Trump in November, or hedging a specific position. Often those buyers hold ETFs briefly, so they don’t incur the full cost of the annual expense.

Many of the more expensive ETFs also have options attached to them that create more ways to trade.

“We don’t believe that BlackRock is cannibalizing itself to any meaningful extent,” JPMorgan Chase & Co. analyst Kenneth Worthington said in a research note last month.

“If we did not do those price cuts last year we would not have had those flows,” Fink said in an April 19 interview. Not everyone is a fan of the two-tiered pricing.

Rachleff, whose clients hold about $6 billion in ETFs and other products, said that if BlackRock cut its fees to match Vanguard’s across the board, it would cost the firm more than $500 million in profits. “BlackRock designed this ruse to maintain their profitability,” he wrote of the pricing policy.

Martin Small, head of U.S. iShares at BlackRock, said the company segments its business to cater to different clients and works with a range of customers to choose the ETFs “that best fit their investment objectives. That is good for our clients and our shareholders.”