/sites/all/themes/penton_subtheme_wealthmanagement/images/logos/footer.png
Recent
Recent
Bracing for Like-Kind Exchange Reform
Aug 04, 2022
11 Must Reads for the CRE Industry Today (Aug. 5, 2022)
Aug 04, 2022
Some Institutional Investors Are Pulling Out of the Industrial Sector. Here’s Why.
Aug 04, 2022
Airbnb Falls as Summer Bookings Boom Undercut by High Expectations
Aug 04, 2022
Featured
The 10 Best and 10 Worst States in Which to Retire in 2021
Jul 15, 2021
Poll: 15 Classic Books on Investing and the Markets
Apr 03, 2020
Fifteen Must-Listen Business Podcasts for Advisors
Aug 14, 2020
Celebrity Estates: Jay Leno and Planning for Classic Car Collections
Feb 22, 2022
Inside ETFs Conference
brought to you by 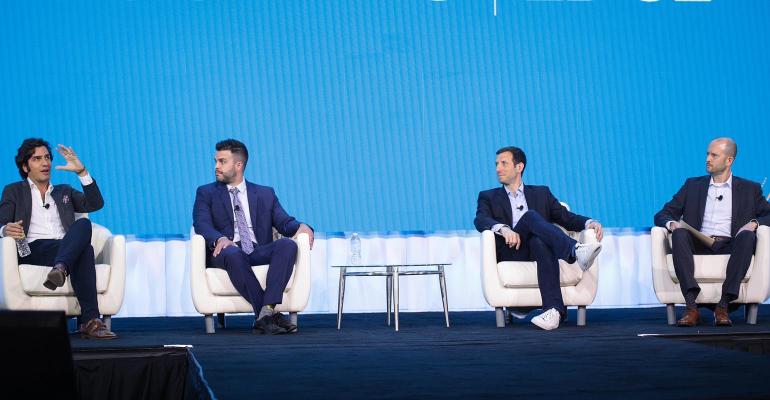 July 6 is the deadline for the SEC to decide on Grayscale Investment’s most recent application for a spot bitcoin ETF, as advocates argue failure to approve puts U.S. at a disadvantage.

July 6 is the day the Securities and Exchange Commission is set to approve, or not, Grayscale Investment’s application to launch an exchange traded fund that invests directly in bitcoin.

Approval for a spot bitcoin ETF has become the holy grail for a dedicated part of the financial community. Many companies have climbed the rough obstacle-filled terrain of the SEC only to see their filings blown up by a hidden land mine.

With other countries bringing spot bitcoin ETFs to the market, the SEC’s refusal to grant approval has left many frustrated. The long march toward a spot bitcoin ETF for U.S. investors was a prominent theme at the recent Inside ETFs at The Diplomat Beach Resort in Hollywood, Fla., earlier this month.

Nate Geraci, president of registered investment advisor The ETF Store, and host of the "ETF Prime" podcast, opened a discussion by asking the panel, “Where does (the Grayscale) filing currently stand and what do you expect to happen?”

Related: Roubini: Stay Away From Crypto

“We have a filing in the 240-day waiting period, which expires on July 6,” replied David LaValle, senior managing director and global head of ETFs at Grayscale Investments. He added that it’s already received 7,800 comments in support of approval, with only two letters against.

His firm runs the Grayscale Bitcoin Trust (GBTC), a private trust with $19 billion in assets that trades over the counter. It’s the first digital currency investment vehicle and holds 3.4% of the world’s bitcoin, according to Grayscale. The firm has filed to turn GBTC into an ETF.

LaValle said the SEC has been consistent in its messaging and concerns about the underlying bitcoin market. The three main concerns are: Is the market of significant size? Can the market be susceptible to manipulation? And is there sufficient surveillance between the exchanges?

Many bitcoin ETF enthusiasts wondered how the commission could approve bitcoin futures ETFs, which are traded like commodity futures and are overseen by the Commodity Futures Trading Commission, allowed under the Securities Act of 1933, yet not the spot structure, which would also be a ’33 Act fund.

Geraci brought up Grayscale’s previous statements that the firm may sue the SEC if it denies the GBTC filing.

”Suing your regulator is certainly a decision that doesn’t come lightly, but all options are on the table,” said LaValle. He said approval would be in the best interests of the market and the more than 860,000 investors in GBTC, which trades at a 30% discount to its net asset value (NAV), a gap that would disappear for an immediate gain to investors—should the trust convert to an ETF.

Currently, in the U.S., GBTC is the most popular way advisors access bitcoin exposure, said Geraci. Other options include ETFs that hold bitcoin futures, such as the Proshares Bitcoin Strategy ETF (BITO); ETFs that hold the stocks of blockchain companies and crypto exchanges, such as the Amplify Transformational Data Sharing ETF (BLOK); and separately managed accounts (SMAs) that invest directly in crypto.

Geraci said surveys of advisors show they want a spot ETF, but he believes “the SEC will not approve a spot product until they have direct regulatory oversight over the underlying crypto exchanges. That’s the way I read (SEC Chairman Gary) Gensler’s comments.”

“I think we have everything we need to get the SEC comfortable,” said LaValle. “But, that doesn’t mean they are going to approve the product.”

Protecting investors is in the SEC’s mission statement. But with spot bitcoin ETFs trading in Brazil, Canada and other countries, the SEC can’t pretend it’s protecting investors by not approving this product, as billions of dollars of wealth are being created by retail investors in these other markets, said Bruno Sousa, head of global expansion and interim head of U.S. for Hashdex.

Sousa said the U.S. regulatory stance on crypto has put the country, and its investors, at a disadvantage.

“The U.S. is the largest market in the world, but a lot of crypto companies are not based here. They would be if these rules weren’t here,” he said.

Jackson Wood, portfolio manager at Freedom Day Solutions, said many advisors and retail investors will have a better experience if they can go to platforms run by Charles Schwab or Fidelity and invest in a spot bitcoin ETF alongside their other positions.

“But we’ve gotten tired of waiting,” he said. His firm finds many benefits in directly owning crypto assets in separately managed accounts.

These benefits of direct ownership include no wash sales rule for taxes. He said investors don’t have to wait a month after a sale but can go “in-and-out” to grab capital losses to offset gains while maintaining their position.

Wood said other benefits of direct ownership include the ability to participate in decentralized finance platforms and lend out their crypto assets for yield.

But most advisors would benefit from the ease and convenience of a spot bitcoin ETF, said Ric Edelman, the founder of Edelman Financial and author of The Truth About Crypto. While he thinks it will inevitably happen, he too urged advisors not to wait on the SEC.

“If you think the price of bitcoin is going to go up when the SEC eventually approves an ETF, why would you want to wait? Get in now,” he said during a town hall at the conference.