/sites/all/themes/penton_subtheme_wealthmanagement/images/logos/footer.png
Recent
Recent
New Research: Investing in Seniors Housing Properties—Opportunities and Challenges
Jul 06, 2022
Seven Must Reads for the CRE Industry Today (July 6, 2022)
Jul 05, 2022
Outlet Center Development Wakes Up After a Long Break
Jul 05, 2022
Newbies are Running Risks as They Flock to Triple-Net-Lease Assets
Jul 05, 2022
Featured
The 10 Best and 10 Worst States in Which to Retire in 2021
Jul 15, 2021
Poll: 15 Classic Books on Investing and the Markets
Apr 03, 2020
Fifteen Must-Listen Business Podcasts for Advisors
Aug 14, 2020
Celebrity Estates: Jay Leno and Planning for Classic Car Collections
Feb 22, 2022
Inside ETFs Conference
brought to you by 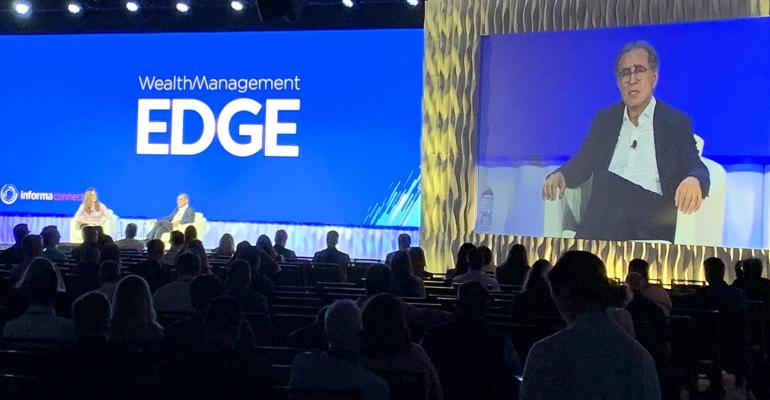 Roubini: Stay Away From Crypto

During a talk at WealthManagement EDGE, NYU Stern School of Business Professor of Economics Nouriel Roubini questioned whether cryptocurrencies should be considered currencies at all.

New York University Stern School of Business Professor of Economics Nouriel Roubini cautioned investors not to view cryptocurrency as an effective hedge against inflation (and questioned whether bitcoin and other cryptocurrencies were currencies at all) during a discussion at this year’s WealthManagement EDGE conference.

“In the case of bitcoin or any other essentially cryptocoin asset, the basis for the fundamental value and the basis for the capital gain is not there, it’s vaporware; it’s not backed by anything,” he said during a discussion with Blue Ocean Global Wealth CEO Marguerita Cheng. “They’re not currencies, they’re not even assets, they’re highly volatile, they’re speculative and they’re subject to manipulation of one sort or another.”

Roubini’s one-on-one with Cheng was one of the first events during the week-long conference, being held in-person at The Diplomat Beach Resort in Hollywood, Fla. During their conversation, Roubini (who is also the head of Roubini Macro Associates) surveyed inflation’s continued strain on the economy, predicting we’d see a “hard landing” out of the inflationary period via a recession rather than a soft landing avoiding one.

Roubini detailed an array of geopolitical stressors on these possibilities, including how much central banks would be willing to tighten monetary policy and whether Russia’s war with Ukraine becomes more protracted. But much of the discussion was an extended critique of cryptocurrency, with Roubini describing himself as a skeptic. Roubini noted crypto’s sobering recent market performance, with bitcoin falling below $26,000 earlier in May for the first time in 16 months.

Roubini said his skepticism was based on several factors, including that scams and money manipulation were far too prevalent among crypto options. He also stressed that hedging with crypto wouldn’t suffice in an inflationary environment, remarking that as inflation worries have risen, Bitcoin, Ethereum and other cryptocurrencies’ values were collapsing by more than half. Roubini also believed cryptocurrencies were far too heavily correlated with risky assets.

Even a description of cryptocurrency as a currency was a “misnomer,” according to Roubini, who argued that nobody was pricing goods or services in Bitcoin and Ethereum, among others. Crypto’s scalability remained an issue, with Roubini claiming bitcoin can only process five transactions per second. Those accepting it as a means of payment also are taking an undue risk, he argued.

“Suppose you had a profit margin of 10 to 15%,” he said. “Overnight, bitcoin can fall by 10 to 15%. Your margin is going to be essentially wiped out, so you’re taking a huge market risk.”

Though Roubini noted some supporters consider cryptocurrencies as assets as opposed to currencies, he remained skeptical. In his view, assets offer benefits for its holders; stocks offer dividends, bonds offer coupons, real estate can generate rent, owning a home can provide housing and even gold, while not having income, has industrial uses, utility through creating jewelry, and has long acted as a store of value against inflation, financial crises and broader geopolitical risk.

But cryptocurrencies lacked income, uses or utilities in contrast with more conventional assets, according to Roubini, in sharp relief with these other examples.

“So I would stay away from them,” he concluded.