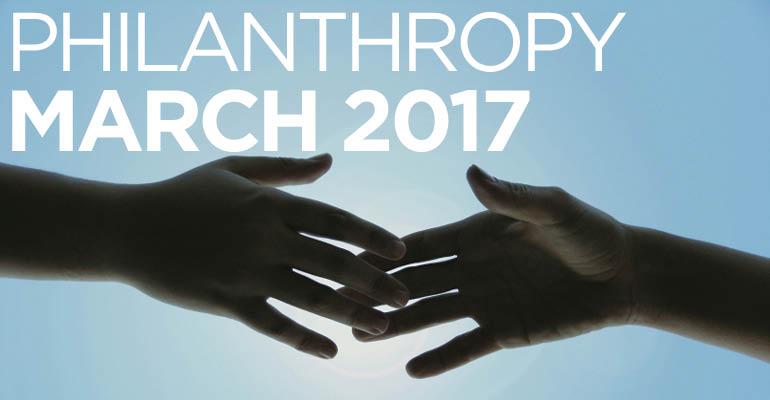 As we all know, Congress is seriously considering far reaching tax reform measures, including a number of possible changes to the treatment of charitable gifts for tax purposes.

Given the numerous proposals for the limitation of charitable deductions, now may be a good time to stop and consider the role of state and federal income taxation when clients are considering what to give, when to give and how much they would like to devote to charitable purposes.

Over 2,300 years ago, Aristotle commented on the challenges one faces when considering how to make larger charitable gifts:

To give away money is an easy matter and in anyone’s power, but to decide to whom to give it, how much to give, when to give, and to give for the right motive and in the right way, is neither in everyone’s power nor an easy matter. Hence, it is that such excellence is rare, praiseworthy, and noble.1

My columns typically focus on various aspects of the “what,” “when” and “how” of larger charitable gifts. At this juncture, however, it may be wise to step back and explore the “who” and “why” of charitable gifts.

Americans have always been an extraordinarily generous people. It’s estimated that over 80 percent of Americans support one or more charities each year.2 Some 36.4 million taxpayers reported making charitable gifts totaling $194 billion in 2013, the most recent year for which statistics are available.3 Itemized charitable gifts have averaged 80 percent of total individual giving for many years.

Recent Internal Revenue Service data reveals that a disproportionate portion of charitable gifts in terms of numbers and dollar amounts are made by individuals over the age of 55, with the 21 percent of itemizers over the age of 65 giving fully one third of all gifts that were deducted. These taxpayers also made average gifts nearly twice as large as those made by itemizers overall.4

The reasons individuals choose to make charitable gifts are as varied as each unique personality. In my experience, however, there are a number of motivators at play in shifting combinations.

Religious beliefs. Perhaps the broadest motivation for giving is rooted in religion. All of the world’s major religions stress the importance of charitable giving. According to Giving USA, religious-based organizations are by far the largest recipients of charitable gifts each year. It’s important for those advising clients regarding their philanthropy to be aware of how their religious beliefs may impact their giving.5

For example, in some cases, donors may wish to keep their giving anonymous for religious reasons and have advisors act as intermediaries for their gifts, shielding their identity from the recipient organization. Donor-advised funds can serve the same purpose.

Social motivations. In other cases, donors may be motivated by social considerations. They may believe that their leadership status in their community demands that they shoulder financial and oversight responsibilities for social and other needs. It’s this motivation that leads tens of thousands of individuals nationwide to volunteer their time to serve on governing boards of as many as 1 million non-profit entities registered with the IRS.

The concept of noblesse oblige underlies the giving of some individuals who feel that with their wealth and other privileges comes a duty to serve society in terms of time and money, regardless of their religious beliefs.

Political theory. Another group of individuals give because their political philosophy demands it, regardless of other factors. Examples include those who believe in a very limited role for government that doesn’t include funding social welfare, arts and other activities that they believe are best undertaken by civil society (that is, the aggregate of private entities apart from business and government). They believe that it isn’t the role of government to impose taxes and make decisions regarding a multitude of societal needs, but rather is the province of individuals making voluntary contributions of time and money to meet these needs.

Disagreement regarding the role of government as opposed to private support in the realm of health, education, arts and social welfare is at the core of the current debate over the interplay of taxation and charitable giving in the design of a new individual Tax Code.

Emotion. A wide range of human emotions are at the core of many charitable giving decisions. Love, anger, compassion, pride and any number of other feelings have long motivated charitable gifts. An individual may make a significant gift in honor of a loved one to memorialize his memory. Or, he may give out of gratitude for a scholarship that was bestowed on him or out of anger focused on a disease that took the life of a loved one and the fear it could afflict him as well.

Tax considerations. In my experience over the past 35 years, I’ve rarely seen the desire to eliminate taxes rise to the level of prime motivator for a charitable gift. And, even when tax considerations were paramount, the individual ultimately decided on the charity that actually received the funds based on one of the above mentioned motivators. Why is this the case?

First, a rational person doesn’t give away a dollar to save 40 cents. That gift still “costs” the person 60 cents. This is true in the case of both income and estate taxes.

Second, while there are exceptions, the tax savings will usually be the same regardless of which charity receives the gift. The rates that will be paid on charitable remainder trusts, gift annuities and other split-interest gifts are typically quite similar, if not the same. That being said, the final amount of a gift is often heavily influenced by tax considerations. How funds donated to charity are, or aren’t, taxed can influence not only the amount of a gift but also the type of property used to fund it.

This latter reality is at the core of the debate over the charitable giving aspects of tax reform, and the outcome will ultimately be determined by how one approaches the relationship between government and the non-profit sector.

One view is that the Tax Code should include “incentives” that encourage taxpayers to support charities. Implicit in this view is that the government has a “right” to a certain amount of one’s income and can decide to give up that right in the form of a “tax expenditure,” whereby the government voluntarily forgoes the right to a portion of taxes if the funds are directed in acceptable ways.

A very different view is that the government’s ability to tax should be limited, and funds voluntarily directed by taxpayers to meet broader social needs shouldn’t be considered part of taxable income. This view was apparently the origin of the charitable deduction as we know it when it was introduced 100 years ago.

Every dollar an individual earns is taxed, spent, saved or given to others. The concept was that income taxes shouldn’t effectively reduce the discretionary income from which charitable gifts are made, and those gifts shouldn’t have to be made from after-tax dollars.

From the very beginning, Congress concluded that citizens shouldn’t be allowed to devote all of their income to charitable purposes, and everyone should contribute some amount to fund the central roles of government. Hence the longstanding percentage of adjusted gross income limits on amounts deductible in a given year.

The difference in these approaches can be illustrated from a cash flow perspective. If someone earns $100,000 and gives $10,000 to charity, and there’s no personal income tax, it takes $10,000 worth of income to make that gift.

If, on the other hand, there’s an income tax of 33 percent, and the $10,000 gift isn’t excludable in some way from taxable income, the donor must earn $15,000 before tax to make the same gift. That represents a 50 percent higher “cost” of the gift. Those who would eliminate or severely limit charitable deductions would intentionally be bringing this result about to a greater or lesser extent.

It’s not that individuals necessarily need a tax incentive to make gifts, the reality is that the reversal of a century-long policy of not taxing charitable gifts will undeniably have a chilling affect on those who must suddenly earn much more to give the same amount.

Governments sometimes tax behavior society wishes to curtail. This behavior typically includes activity that’s harmful to one’s health or to the health of a society as a whole. Query whether charitable giving is an activity that should be discouraged in this manner.

Regardless of the final determination regarding the tax aspects of charitable giving, every gift will ultimately be based on a combination of various motivations that combine in a myriad of combinations. See “The Mix,” this page. The “why” of the gifts is almost always rooted in a combination of non-tax motivators. Advisors often focus on tax and other financial aspects of charitable gifts—and understandably so. We can often better serve clients, however, through an understanding of other motivations that are central to the motivation of a gift.

Trusted advisors can often serve to help clients and the charities they wish to benefit balance all of the root motivators in light of very real financial and tax considerations in ways that maximize the tangible and intangible benefits of charitable gifts to all concerned.

The size of gifts, when they’re made and the property used to fund them could be deeply impacted in both intended and unintended ways by changes in our nation’s income and estate tax policy that are now under consideration.

At this critical juncture, we as a society should think long and hard before we take actions that could upset a delicate balance of factors that have been at the root of funding vital components of our civil society for the past 100 years.