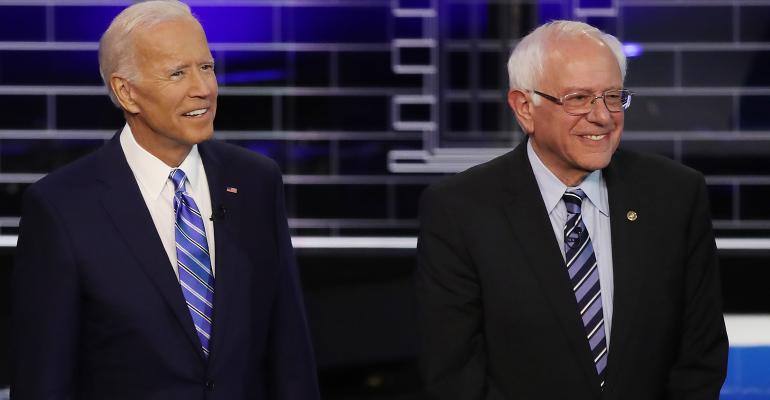 Clients should be able to take proactive steps without worrying about retroactive provisions.

As most planners are now aware, U.S. Sens. Bernie Sanders, Chris Van Hollen and others have introduced tax bills in the Senate this year, which essentially eliminate every significant estate-planning tool or advantage currently available to advisors and their clients, whether in the form of a historically high estate and gift tax exemption, stepped-up income tax basis at death, minority interest discounts or sales to grantor trusts. Further, as part of his American Families Plan, President Joe Biden has proposed substantially curtailing the stepped-up income tax basis at death.

While Sanders’ For the 99.5% Act doesn’t appear to be retroactive, the Sensible Taxation and Equity Promotion Act of 2021 (STEP Act)—which taxes transfers via gifts and transfers at death as deemed capital gains for income tax purposes—purports to be retroactive to transfers on or after Jan. 1, 2021.  This retroactive aspect, while of questionable constitutional validity, nevertheless served to paralyze many attempts to grandfather the current $11.7 million estate and gift tax exemption as well as many of the discounting and other estate-planning techniques planners currently employ.

Now that we have the Green Book, which covers all of the same ground as the STEP Act, it seems that we no longer need to be concerned with retroactive provisions and can advise clients to take certain proactive steps.

Prior to the release of the Green Book, the planner’s dilemma derived from the fact that attempts to grandfather various estate-planning techniques that would be eliminated by Sen. Sanders’ For the 99.5% Act (for example, by making irrevocable lifetime transfers today, including transfers to an irrevocable trust) could be impacted by the retroactive provisions of the STEP Act or by similar retroactive provisions in President Biden’s upcoming bill and, as a result, be subject to income tax, potentially at higher capital gains tax rates than exist today, or trigger the application of the life insurance transfer for value rule.

As it turned out, however, the deemed sale provisions outlined in the Green Book are generally effective only for transfers and decedents dying after 2021.  Thus, the risks that pre-2022 transfers aimed at grandfathering the transferor and the transferor’s family against the various For the 99.5% Act tax law changes, as well as against the Green Book's own deemed sale provisions, have been largely eliminated.  It can therefore be said that the taxpayer now has the green light to grandfather advanced estate planning, as well as so-called “5-year Medicaid planning,” by making irrevocable transfers prior to 2022, including sales and other transfers to grantor trusts.

While the STEP Act had imposed a deemed sale on irrevocable trusts every 21 years, the Green Book creates a deemed sale only every 90 years. Although this provision still includes associated constitutional law issues, an extra 69 years' income tax deferral is obviously significant and, in most cases, will make it easier to make pre-2022 transfers to irrevocable trusts (including to grantor trusts that aren’t revocable) intended to grandfather the same against the potential for earlier application of the deemed sale rules and/or the For the 99.5% Act proposals.

Therefore, as a consequence of the postponed effective date of the Green Book's deemed sale rules generally, planners should now feel free (subject, of course, to the remote chance that Congress would use the STEP Act’s retroactive effective date) to advise their clients to make lifetime transfers (to spousal access trusts or otherwise) over the next six months in an effort to grandfather the current estate and gift tax exemption and/or take advantage of existing estate planning techniques before any potential law changes take effect. In doing so, however, the advisor should take into consideration that the exclusions described in the next section of this article may not be fully available to any trust transferee.

Any trust instrument used should be drafted so that, as each generation of beneficiaries of the irrevocable trust passes, the trust assets are intentionally included in the beneficiaries’ gross estates to the extent the same won’t cause federal or state estate taxes or deemed sale taxes, beginning with the most appreciated assets of the trust, and after factoring in the decedent's federal and state estate tax exemptions and deemed sale exclusion. The purpose of this intentional estate tax inclusion is to obtain the maximum income tax basis step-up possible under the law at the time, but without causing any tax to be paid in the process. By proceeding in this manner, in most instances there’s little to be lost in the way of income tax basis step-up at each generation by making pre-2022 irrevocable transfers, regardless of whether the Green Book deemed sale proposals are ultimately enacted  If a spousal access trust technique is employed, consider using the “double spousal access trust” device to avoid the reciprocal trust doctrine and maximize the couple’s access to the income and principal of the trust.

Contrary to traditional gift planning, if eventual passage of a deemed sale rule is of significant concern to the owner, in general the assets transferred to an irrevocable trust prior to 2022 should be the transferor’s most appreciated assets. By proceeding in this manner, any eventual deemed gain on the sale of the owner’s retained assets at death would be minimized, and any deemed gain on the appreciated assets transferred to the trust would be deferred by up to 90 years. An exception to this general rule would apply in cases where the 90-year period is likely to trigger an early deemed sale, since the exclusions described in the next section of this article would not be available to the trust.

The STEP Act had placed a $100,000 lifetime limit on the amount of deemed gain that could be excluded on the transferor’s lifetime transfers. Another favorable aspect of the Green Book's approach to deemed sales is that it increases this lifetime deemed gain exclusion tenfold, to $1 million, or $2 million for a married couple. The Green Book also preserves the current $250,000/$500,000 exclusion for the gain on the sale of a principal residence, as well as the exclusion for gain on certain small business stock sales under Internal Revenue Code Section 1202.

One troublesome aspect of the Green Book proposed rules is that, for purposes of computing the gain on deemed sales, “a transferred partial interest would be its proportional share of the fair market value of the entire property.” Thus, if a person owning an undivided one-half interest in real property having a value of $1 million dies, the decedent would be deemed to have sold property worth $500,000, even though the actual FMV of the undivided one-half interest might be only $400,000.

Query how this “partial interest” Green Book language should be read in the case of a minority interest in a closely held business. Will the traditional minority and marketability interest discounts be ignored, thereby causing a minority shareholder to incur a deemed gain that’s as much as 50% more than it would be if the value of the transferred property were based on its actual FMV? If so, this represents another reason for doing grandfathered estate planning prior to 2022. It is also concerning that the Green Book proposes to include legislative changes designed to facilitate and implement "consistency in valuation for transfer and income tax purposes." Could this quoted language also mean the elimination of fractional and minority interest estate and gift tax discounts generally?

The Green Book dramatically alters the STEP Act by allowing the deemed sale tax on a transferred closely held business interest at death to be deferred until the family disposes of the business. What’s more, this same rule appears to apply to deemed sales of a closely held business interest during the transferor’s lifetime as well as to deemed sales by nongrantor trusts under the 90-year rule. If deemed sale taxes after the current owner’s death are therefore the only concern of the business owner in a situation in which the family will continue the business after the owner's death, under the Green Book approach transfers to an irrevocable trust prior to 2022 may not be essential. However, if grandfathering the current federal estate tax exemption level and avoiding some of the other changes proposed by Sanders in the For the 99.5% Act are a concern, transferring assets to an irrevocable trust (including a spousal access trust) before 2022 will be advisable.

The Green Book deemed sale rules could potentially apply twice in the case of transfers to certain irrevocable trusts (including so-called domestic asset protection trusts as well as certain trusts designed to be nonresources, for Medicaid purposes, but intentionally included in the transferor’s gross estate, for estate tax purposes). These trusts aren’t “revocable” in the common sense of the word, and, therefore, until we have the actual statutory language, transfers to the same remain arguably subject to the deemed sale tax under the Green Book. Further, because the Green Book also provides that “a transfer would be defined under the gift and estate tax provisions,” there will arguably be a second deemed sale at the original transferor’s death, when the property is included in his estate, even if the trust were established and funded prior to 2022. These deemed sales would be in addition to sales under the above-described 90-year rule.

Based on the above analysis, if the possibility of a deemed gain at death under a pre-2022 irrevocable trust exists, and if the potential deemed gain at death (when aggregated with the decedent’s other deemed gains) exceeds $1 million, the owner should consider releasing any rights or powers that cause the estate tax inclusion under these trusts, prior to 2022. The hope is that the transferor then lives at least three years after executing the release, as required by IRC Section 2035(a)(2) to avoid gross estate inclusion after 2021 and a potential deemed sale at that point.

For similar reasons there also needs to be caution in drafting of any new trusts of the above varieties, even if finalized and funded prior to 2022.

One final word of caution: If owners are concerned that the passage of the original STEP Act, with its retroactive effective date, is a real and valid possibility, then of course they’ll want to think twice before making a current transfer.

Perhaps the greatest area of uncertainty involving the Green Book's deemed sale proposals concerns the construction and application of  its above-referenced 90-year deemed sale rule, which is only two sentences long: “Gain on unrealized appreciation also would be recognized by a trust, partnership, or other noncorporate entity that is the owner of property if that property has not been the subject of a recognition event within the prior 90 years, with such testing period beginning on January 1, 1940. The first possible recognition event for any taxpayer under this provision would thus be December 31, 2030."  The Green Book provides that this 90-year rule applies to “certain property owned by trusts, partnership, and other non-corporate entities on January 1, 2022.” Read literally, the combination of these provisions may have widespread application.

For example, because the word trust isn’t limited to irrevocable trusts, and the words partnership or other noncorporate entity aren’t limited at all, what if an owner had inherited outright appreciated property from his parents (including property owned by a partnership or other noncorporate entity), who purchased the property on Jan. 1, 1940, and subsequently transferred this property to his revocable trust. Will this property be the subject of a deemed gain on Dec. 31, 2030, even though the property is a part of the new owner's taxable estate, and even though the new owner never made a lifetime gift of the property? If not, why not? Hopefully this situation will be clarified and appropriately limited in the actual bill language to come, but until then, this sweeping Green Book language presents a serious concern. Fortunately, the Green Book appears to indefinitely defer the actual payment of the tax in these situations, regardless, when the property involved is a closely held business continued by the family.