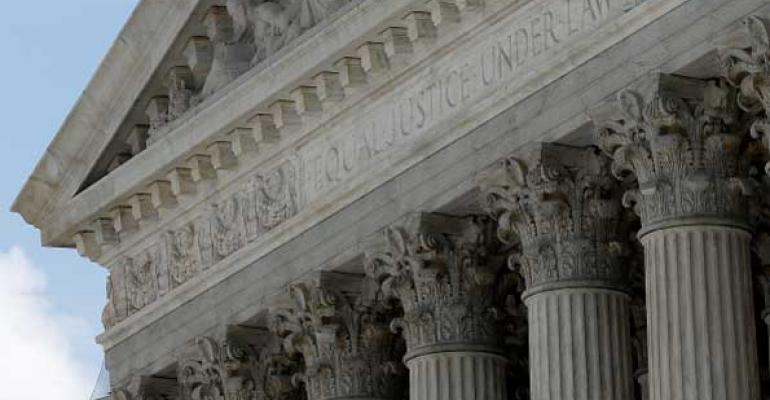 Without any details, how are advisors expected to advise their clients today?

As most estate planners are aware by now, tax bills have been introduced by U.S. Sens. Bernie Sanders, Chris Van Hollen and others that, when aggregated, essentially eliminate every significant estate-planning tool or advantage advisors and their clients currently possess, including an historically high estate and gift tax exemption, stepped-up income tax basis at death and minority interest discounts. And as part of his American Families Plan (AFP), President Joe Biden has proposed a substantial curtailment on stepped-up income tax basis at death.

The problem is, although Biden introduced his proposal to eliminate income tax basis step-up at death several weeks ago, as of the date this article went to press, his administration had yet to release any actual bill language in this regard. As all advisors know, the devil is in the details. The question thus remains: Without any details, and with the potential for retroactive application of any basis step-up legislation, how are advisors expected to advise their clients, today?

One response might be to take a wait and see approach. The only problem with this plan is that the basis step-up bill that’s eventually passed by Congress may take effect on: (1) the date the bill is first introduced in Congress, (2) a date retroactive to the date Biden first proposed the AFP or (3) worst of all, a retroactive date beginning on Jan. 1, 2021, similar to what’s provided in the Sensible Taxation and Equity Promotion Act of 2021 (the STEP Act), which was introduced by Sen. Van Hollen in late March 2021.

Herein lies the obvious dilemma: Although Sanders’ “For the 99.5% Act" doesn’t purport to be retroactive in nature, and would therefore appear to be constitutional, the STEP Act, which taxes transfers via gifts (including gifts to grantor trusts) as well as at death as deemed capital gains for income tax purposes, as though the transferor or decedent sold the transferred asset at the time of the transfer at its historical cost tax basis, purports to be retroactive to transfers on or after Jan. 1, 2021. Further, the proposed effective date of the basis step-up provisions to be included in the AFP may end up being: (1) Jan. 1, 2021, (2) the date Biden first proposed the legislation or (3) the date the legislation is formally introduced into Congress. These dates will be important if Biden’s bill language ends up tracking the STEP Act, primarily because lifetime gifts are treated as sales under the STEP Act.

The estate planner's dilemma derives from the fact that attempts to grandfather various estate-planning techniques that would be eliminated by Sen. Sanders' “For the 99.5% Act,” by making irrevocable lifetime transfers today, including transfers to an irrevocable grantor trust, could be hit by the retroactive provisions of the STEP Act or of President Biden’s upcoming bill, and therefore be subject to income tax, potentially even at higher capital gains tax rates than exist today.

All of this background leads to the following central question: Are the retroactive provisions of the STEP Act, which effectively paralyze lifetime gift planning on the part of advisors and their clients, constitutional? The same question applies to the yet-to-be-released bill by Biden, since this bill may also subject lifetime gifts to capital gains income tax treatment and potentially purport to be retroactive.

The facts of Untermyer v. Anderson, 276. U.S. 440 (1928), involving the introduction of the federal gift tax, are virtually identical to the current situation involving the STEP Act and the proposed introduction of a capital gains tax on gifts and inheritances. Depending on the bill language that President Biden eventually releases, they’re potentially also similar to the stepped-up basis repeal provisions of the AFP. According to the Syllabus to the case:

1. The gift tax provisions of the Revenue Act, approved June 2, 1924, must be construed as applying to gifts made at any time during that calendar year.

2. So far as applicable to bona fide gifts not made in anticipation of death, and fully consummated prior to June 2, 1924, those provisions are arbitrary and invalid under the Due Process Clause of the Fifth Amendment.

3. The mere fact that a gift was made while the bill containing the questioned provisions was in the last stage of progress through Congress isn’t enough to relieve the legislation of its arbitrary character.

According to the Court: "To accept the contrary view would produce insuperable difficulties touching interpretation and practical application of the statute, and render impossible proper understanding of the burden intended to be imposed.  The taxpayer may justly demand to know when and how be becomes liable for taxes—he cannot foresee and ought not to be required to guess the outcome of the pending measures. The future of every bill while before Congress is necessarily uncertain. The will of the lawmakers is not definitely expressed until final action thereon has been taken.” 276 U.S. at 445-46.

The problem with relying on Untermyer as the sole authority for challenging the constitutionality of the retroactive provisions of the STEP Act or of any future legislation introduced by Biden, however, is that the Supreme Court has also held, in United States v. Darusmont, 449 U.S. 292 (1981), that because Untermyer is a gift tax case, it doesn’t regard it “as controlling authority with respect to any retroactive feature of the federal income tax.” 449 U.S. at 448, citing Welch v. Henry, 305 U.S. 134 (1938), at 147-148. The Supreme Court “consistently has held that the application of an income tax statute to the entire calendar year in which enactment took place does not, per se, violate the Due Process Clause of the Fifth Amendment.” Darusmont, 449 U.S. at 297.

At first blush, based on the Supreme Court’s 1981 decision in Darusmont, it appears that taxpayers will have no ground to object to the retroactive aspects of the STEP Act or of any similar retroactive proposal of the Biden administration. Why, then, did Van Hollen and his staff choose to include the following language as Section 8 and the last section of the STEP Act bill: “If any provision of this Act or amendment made by this Act, or the application of a provision or amendment to any person or circumstance, is held to be unconstitutional, the remainder of this Act and amendments made by this Act, and the application of the provisions and amendment to any person or circumstance, shall not be affected by the holding.”

By opting to twice quote the emphasized language from Judge Learned Hand's opinion in Cohan v. Comm’r, the Supreme Court appears to have drawn an important distinction between the retroactive application of income tax rates, and even the retroactive effect of a corrective income tax measure, on the one hand, and the retroactive effect of the actual creation of a new tax where one didn’t exist previously, on the other. The distinction Judge Learned Hand drew when one who “has no reason to suppose that any transactions of the sort will be taxed at all,” is the same distinction the Supreme Court drew only two years earlier, in Untermyer, when in the gift tax context it said: “The taxpayer may justly demand to know when and how be becomes liable for taxes—he cannot foresee and ought not to be required to guess the outcome of the pending measures. The future of every bill while before Congress is necessarily uncertain.” 276 U.S. at 445-46. See also United States v. Hudson, 299 U.S. 498 (1937), upholding a limited 35-day period of retroactivity for a new tax on silver, when the new tax was basically certain to pass.

Where Should Planners Go From Here?

Under virtually the exact same facts as we have today, in the gift tax context the Supreme Court, in Untermyer, ruled the retroactive aspects of the law to be unconstitutional. This 1928 decision has never been reversed by the Supreme Court, only distinguished when a different issue involving corrective or similar legislation affecting an existing statute was involved.

As described above, however, the Supreme Court has also made clear that it doesn’t regard its previous gift tax decision “as controlling authority with respect to any retroactive feature of a federal income tax.” That doesn’t mean that the Supreme Court would adopt a different reasoning process on a retroactive income tax statute when presented with a virtually identical set of facts, however. In fact, in its 1981 decision in Darusmont, the Supreme Court strongly implied it would apply a similar analysis to its 1928 decision in Untermyer, if faced with a retroactive income tax statute involving a similar set of facts. Van Hollen and his staff must have recognized this very real possibility when they opted to include Section 8 in the Senator's bill, dealing with the constitutional question.

The estate planner’s job is to present the above analysis to the client, and also explain that, once a statute is enacted, from that moment forward its application will almost certainly be constitutional. Within this general backdrop, here are some factors and options the client and the estate planner can examine, together:

1. Consider waiting until Biden formulates his bill language and introduces his bill in Congress, because almost certainly, his bill will then supplant the current STEP Act. If Biden's bill doesn’t purport to be fully (that is, to the beginning of 2021) or partially (for example, to the date of its introduction in Congress) retroactive, the client can then make grandfathered transfers before the bill becomes law, using many of the estate-planning techniques Sanders attempts to eliminate. The obvious problem with this approach is that the time to make these lifetime transfers may be severely restricted. Some cushion may be provided, however, if the Senate needs to first debate the application of filibuster rules to Biden's bill, including potential reconciliation. Also, in recent years at least, it seems like it’s almost required that Congress wait until the last few weeks of the calendar year before taking final action on any significant tax bill.

2. If action is intentionally delayed until Biden’s bill is formally introduced in Congress, and if, similar to the STEP Act, Biden’s bill ends up being retroactive, in full or in part, the advisor and the client must then determine whether preenactment transfers should nevertheless be made, under a theory that the retroactive aspects of the law are unconstitutional. If Biden’s bill uses the date of introduction in Congress as the retroactive effective date, however, and if using this date is ultimately determined to be constitutional, the client may have been damaged by not making transfers before President Biden formally introduced his bill.

3. The ultimate decision whether to make pre-enactment transfers may depend on the dollar amounts involved. That is, if waiting until after Biden’s legislation is passed, including, potentially, until the client's passing, will mean the greater likelihood of a larger federal (and, potentially, state) capital gains tax liability coupled with a larger federal (and, potentially, state) estate tax liability (for example, because the current large federal estate tax exemption will have expired by then due to the existing sunset provision or otherwise), many clients may feel the risk is worth the reward and proceed with current transfers under a theory that any retroactive aspects of President Biden’s bill will be ruled unconstitutional, and that, even if the provisions are ruled constitutional, under the worst case scenario they would be potentially accelerating an income tax liability that will be payable eventually, anyway. By biting the bullet early, these clients hope that they’ll significantly lower, and potentially avoid, the eventual future total estate and income tax bill to their families.

4. Finally, one option may be to assume none of the current and proposed estate planning related legislation in Congress will ever be passed, retain the status quo, and potentially use one or more of the techniques the For the 99.5% Act eliminates. The only problem with this approach is that the current large federal estate and gift tax exemptions will then not have been grandfathered, due to the existing sunset provision.