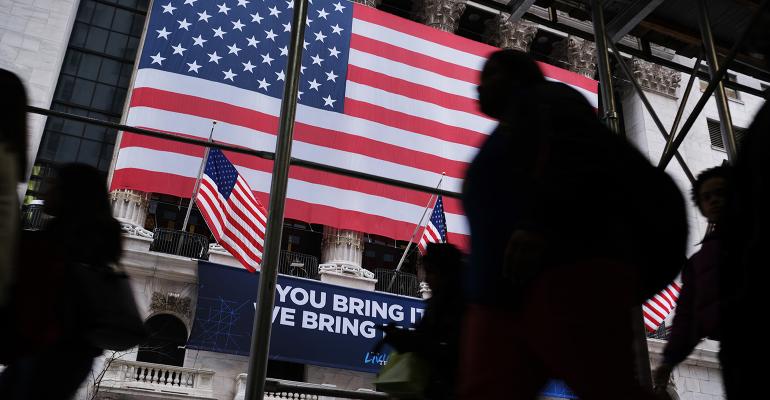 Data from Envestnet and Apex Clearing indicates that financial advisors and millennial investors who use robo advisors bought the dip last week.

Growing concerns about the coronavirus caused a market sell-off last week, with the S&P 500 down 9% and the Dow down nearly 11% during the week. The virus even spurred the Federal Reserve to cut interest rates half a percentage point this week. But advisors and millennial investors did not retreat from the markets; in fact, it was the opposite, with buying activity at unusually high levels.

Financial advisors were more active last week than they have been since December 2018, with a significant shift toward buying risky assets, according to Envestnet Analytics, which collects data from over 1,000 RIA firms that use the Envestnet and Tamarac platforms.

Frank Coates, executive managing director and co-group president at Envestnet Analytics, said advisors’ purchases of riskier assets, anything with an equity bent, was up 127% during the week of Feb. 24 over the 12-week average. By comparison, in 2019, risk-on buying was flat.

“These advisors are managing model portfolios generally, so they’re long-term investments; they’re buy-and-hold; they don’t trade these accounts very much. So that kind of movement is a very significant break in our trends,” Coates said.

Related: In Grip of Coronavirus, Traders Pay Whatever It Takes for Safety

Envestnet also observed an increase in advisor purchase of nonrisky assets—fixed income and cash—but that was up just 16% last week over the 12-week average.

“I would have expected to see a pullback by advisors; instead we see them actually doing the opposite in a meaningful way,” Coates said.

Further, advisors' clients did not react to the market sell-off by pulling money out; withdrawals by client were actually lower last week than the 12-week average, Envestnet said.

The data also indicates that clients are sticking with their advisors more, not less, through this crisis, at least in the early stages, Coates said. Last week saw the lowest number of clients firing their advisors than Envestnet has seen since it started tracking the metric 18 months ago. Of course, clients generally stick with their advisor during tax season, and the uncertain conditions mean many are fearful of making a move.

“But I also think in times of crisis, particularly market crisis, I’m less likely to leave my advisor and probably find my advisor to be more valuable,” he added.

While advisors did move clients into equities last week, the data shows that they chose lower-risk equities. For instance, while low-volatility ETFs have typically ranked somewhere near the bottom of the 1,000 most popular investment products, last week it was in the top 10. Those funds tend to hold utilities and dividend-paying stocks. Inverse funds, which post a mirror-like daily return to the broader market, also ranked in the top 10.

Advisors did take clients out of emerging-market stocks; while that category has typically ranked in the 30 to 40 range in terms of most outflows, last week it was third among advisors.

“I think advisors acted surprisingly confident last week,” Coates said. “They put money to work into equities in general, but in lower-risk type of equities than they had in the past.”

Retail investors were equally active last week; Apex Clearing, the custody and clearing platform for many of the automated advice platforms, or so-called robo advisors, tracks investment activity for those using Apex partner applications, mainly millennials, and found that net buying activity was unusually high last week. For those who are actively picking stocks, they were using the market sell-off as an opportunity to buy.

“The popular news out on the street is, ‘Wait until you see what happens when the market sees a correction. Most people are going to run from robo advisors.’ And we see just the opposite,” said Bill Capuzzi, CEO of Apex.

“The robo advisors have done a really good job of being able to connect with people electronically and deliver messages to them around, ‘Everyone stay calm. Don’t sell. These are buying opportunities for you, by and large, for you to take advantage of the market situation.’”

Among millennial stock pickers, Apex found that they were maintaining or reducing their positions in Chinese companies, such as Tencent. But they bought the dip in cruise lines, with folks adding to positions in Carnival, Capuzzi said.

The results were mixed on airline stocks, with folks retreating from Southwest and JetBlue, while many increased shares in Delta and American Airlines.

Investors on these platforms are also buying Zoom, which provides remote conferencing services.

“This is pretty smart,” Capuzzi said. “They’re getting out ahead, seeing where this is going and finding opportunities to buy into these companies.”