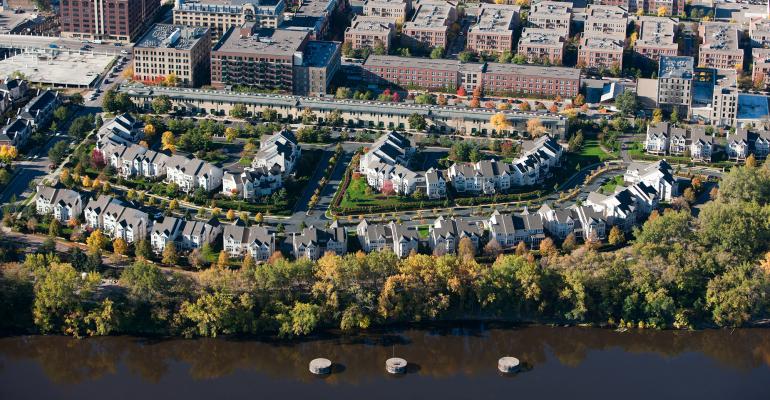 For a city that’s hemmed in by suburbs and has little undeveloped land other than parks, Minneapolis has been pretty successful at adding housing.

(Bloomberg Opinion) -- In December 2018, the Minneapolis City Council approved a new long-term housing plan, dubbed Minneapolis 2040, that spelled the end of single-family zoning in the city, among other things. That is, on the roughly 70% of the city’s land where only detached single-family houses had been allowed, property owners would as of January 2020 be able to build duplexes or triplexes or reconfigure and expand existing houses to add one or two dwelling units.

This change, and subsequent similar moves — and failed attempts — in other cities, counties and states, received a lot of attention. Some hailed it as a landmark step toward making housing more affordable and ending residential segregation. Others decried it as the end of the American way.

Both sides may have been exaggerating a little. Here’s what has happened with duplex and triplex construction in parts of Minneapolis that were previously restricted to single-family houses since the new rules took effect.

Minneapolis had 425,336 residents as of mid-2021, the Census Bureau estimates, and 199,143 housing units as of April 2020. By my count the end of single-family zoning has so far allowed for the permitting of at most 97 new units (the above table shows numbers of buildings, not units), some of which haven’t been built yet. If things continue at this pace, ending single-family zoning will have increased the city’s housing supply by just 1% by 2040.

Happily, there are other kinds of residential construction in Minneapolis, where more than twice as many new housing units were built in the 2010s than in the 2000s (nationally it was 34% less) and, after a dip in late 2020 and early 2021, permits have returned to their brisk late-2010s pace. 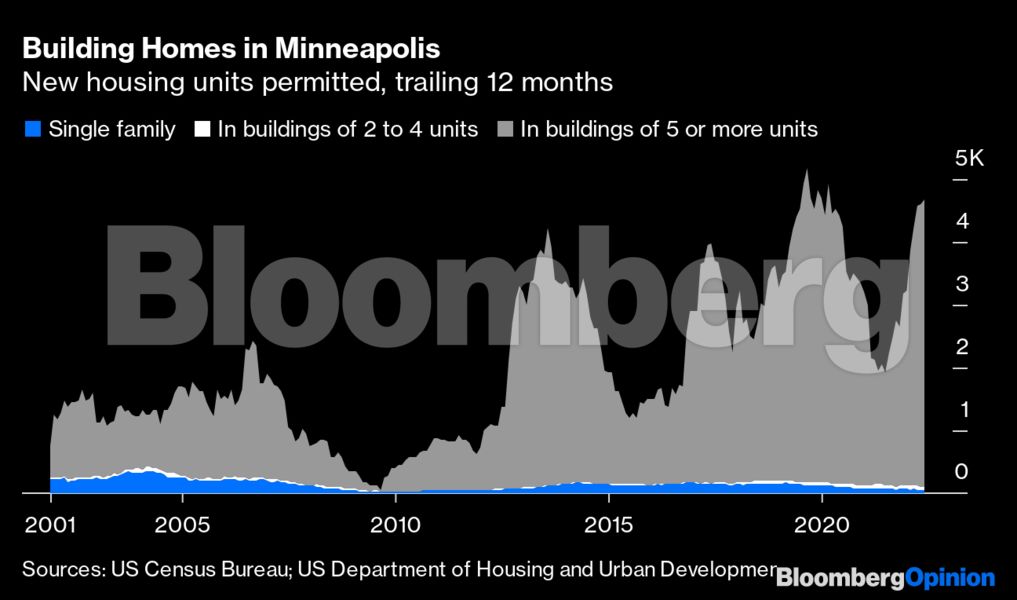 As is apparent from the chart, almost all of this housing is in structures with five or more units. Spend some time in Minneapolis, as I did last week, and it’s apparent that most of these have well more than five units — among the buildings with more than five units permitted so far this year, the average size is 75 units. Apartment buildings have been going up in commercial districts and transit corridors citywide, chiefly of the boxy, three-to-six-story, wood-framed type that have transformed almost every American city over the past decade. Closer to downtown, where the city requires that new buildings be at least 10 stories, they’re taller and not made of wood.

For a city that’s hemmed in by suburbs and has little undeveloped land other than parks, Minneapolis has been pretty successful at adding housing. The 2,317 new housing units permitted in the city in the first half of the year were more than those in the Northern California trio of San Jose, San Francisco and Oakland combined, for example. It’s a lot less than the 11,996 new units in Austin, Texas, the 5,542 in Seattle or the 4,707 in Denver, but among Midwestern cities Minneapolis comes in a solid fourth, behind one much-larger city (Chicago) and two (Sioux Falls, South Dakota, and Omaha, Nebraska) that still have a fair amount of undeveloped land within or adjacent to the city limits. 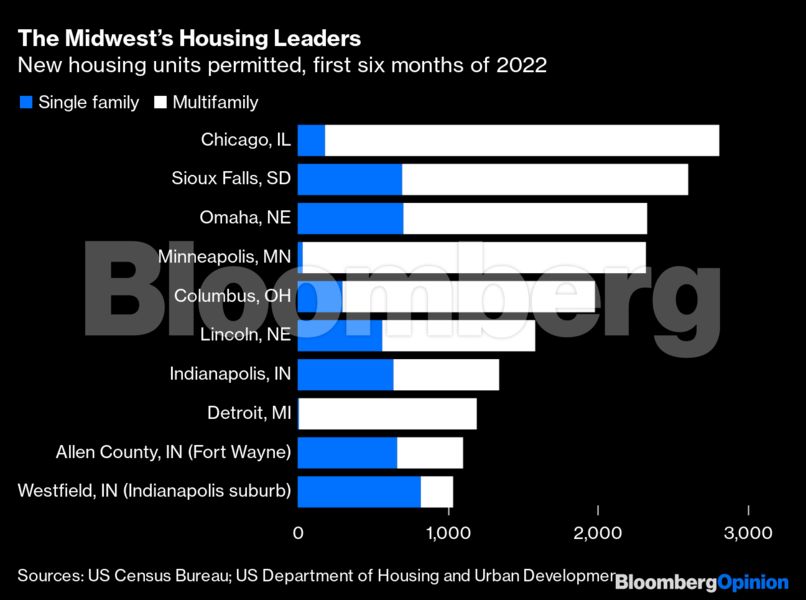 As already noted, Minneapolis was building at a similar pace before Minneapolis 2040 began to take effect — and the highest-profile element of the plan, the end of single-family zoning, is responsible for only about 1% of the new units permitted since January 2020. A Federal Reserve Bank of Minneapolis tracker that compares city housing production with a “synthetic control” based on other large cities finds that permits for multifamily buildings have actually underperformed the control over the past year, although not by a statistically significant amount.

So the plan isn’t revolutionizing housing in Minneapolis, but that’s not really what it was meant to do. “It’s a mild land use plan that took on enormous emotional significance mainly because the overall conversation around land use in the country was so ossified,” wrote urban planner Alex Schieferdecker (who was also the first to note that Minneapolis is outpacing San Jose, San Francisco and Oakland in housing production this year) in an assessment published in June. “It’s a forward-looking document at a time when those are remarkably rare and the crises that we collectively face seem so immediate.”

It’s also about more than just eliminating single-family zoning. Parking minimums — requirements that developers provide a certain number of off-street parking spaces for each unit — went by the wayside in May 2021, and there are signs that this is encouraging the construction of more buildings in the 10- to 50-unit range, which in the first year after the change had a median of only about a quarter of a parking space per unit, much lower than larger buildings. Jason Wittenberg, a planning manager with the city’s Community Planning and Economic Development department, who provided me with the city data cited here, said one of the most important changes is still underway: codifying the city’s already extensive efforts to encourage denser development. Apartment buildings of more than four stories outside the downtown area that in the past required (and often received) negotiated height increases and zoning variances will under the new zoning code be explicitly permitted in transit and commercial corridors, thus “increasing the level of predictability around development,” Wittenberg said. “If you bring a project to the city that follows adopted standards, we’re trying to provide a high probability that you are walking away with a building permit.”

Lack of predictability in housing development in the US is often the result of legal challenges to new construction, and the implementation of Minneapolis 2040 was briefly stalled this summer by a judge’s ruling in a lawsuit filed by the Minneapolis chapter of the National Audubon Society and two local anti-development groups. The judge subsequently put things back on track, but the litigation remains a cloud over the plan. Another cloud is the turmoil and increased violent crime that Minneapolis has experienced since the May 2020 murder of George Floyd by police officer Derek Chauvin, which likely played a role along with the pandemic in the big drop-off in new permits in late 2020 and early 2021.

Also, while from the perspective of the coasts Minneapolis is an oasis of housing affordability, with the median rent on a one-bedroom dwelling just $1,002 in July, according to Apartment List, and rents overall down 2.6% since March 2020, big economic disparities, mostly along racial lines, mean many Minneapolis residents worry that new development will displace them. In neighboring St. Paul, voters in November approved a rent control ordinance that applies to new construction as well as existing rentals, after which the number of new housing units permitted fell to 342 in the first half of this year compared with 1,633 during the same period in 2021 — not a great result for housing affordability. Minneapolis residents also voted in favor of rent regulation in November, but the ballot measure they approved merely gave the city council the authority to enact controls, which it has yet to do. The council has approved inclusionary zoning requirements in conjunction with Minneapolis 2040 that require developers of larger buildings to either set aside some units for lower-income renters or make in-lieu payments or land donations to the city, an approach that while increasing the number of apartments explicitly set aside as affordable may reduce the supply and raise the price of housing overall.

There’s a lot going on in Minneapolis, in other words, beyond just the end of single-family zoning. Still, the shift away from it is significant. Only in the US is the detached single-family house “considered to be so incompatible with all other types of urbanization as to warrant a legally defined district all its own, a district where all other major land uses and building types are outlawed,” Sonia Hirt, a University of Georgia professor of landscape architecture and planning, wrote in her 2014 book “Zoned in the U.S.A.” I understand the appeal of quiet, leafy residential neighborhoods, but it’s clear from Europe and some older US cities that these can be perfectly compatible with and even enhanced by well-designed commercial and multifamily buildings.

Last Wednesday I rode around Minneapolis on a succession of bike-share bicycles (one of which is pictured in the photo atop the Bloomberg.com version of this column) to look at a few of the new duplexes and triplexes. I needed a map and a spreadsheet from the city to find them, while I encountered large apartment building after large apartment building along the main thoroughfares and the Midtown Greenway without even trying.

Smaller multifamily buildings are what has become known as the “missing middle,” once a significant part of the country’s housing mix and now only a tiny fraction of new construction. In the end, I saw only one new triplex, in a neighborhood that already had a lot of multifamily housing although on a block that before 2020 maxed out at duplexes. The several new duplexes I found fit in quite well with their single-family neighbors — more so than a couple of expensive-looking new single-family houses I came across. With street grids and back alleys full of garages the norm in residential Minneapolis, there didn’t seem to be any significant parking issues (although I’m sure there have been complaints). In the Como neighborhood near the University of Minnesota, where duplexes were already allowed on some residential blocks before 2020, there are so many new ones going up that one can perhaps speak of a neighborhood in transition. Elsewhere, they’re sparsely distributed, providing a few more people access to backyards and quiet, leafy, walkable neighborhoods in a city that, in the summer at least, is among the nation’s most livable. That’s a victory, even if it’s not a revolution.