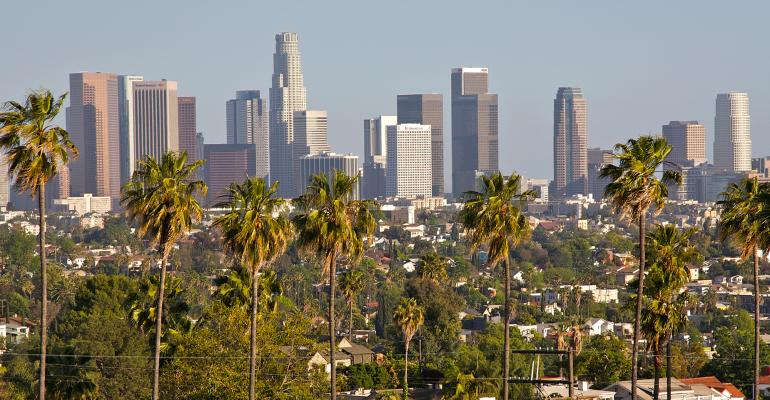 The project will feature two hotels, apartments, condos and retail space. It will test investor appetites to bet on downtown Los Angeles.

(Bloomberg)—Los Angeles has approved a $1.6 billion downtown hotel and apartment development, the biggest project to move forward since Covid-19 walloped the city two years ago.

The developers of Angels Landing, Don Peebles and Victor MacFarlane, say groundbreaking is about two years away as they look complete the two-tower project before the Olympics in 2028.

“It’s the biggest new project in LA coming out of the pandemic and it’ll create jobs in an industry -- hospitality -- that’s been decimated,” Peebles said.

Angels Landing, which still needs financing, wound its way through the city approval process for several years. It includes a 854-foot (260-meter) building that Peebles and MacFarlane say would be the third-highest in Los Angeles and the tallest ever built in the U.S. by Black developers.

The project will feature two hotels, apartments, condos and retail space. It will test investor appetites to bet on downtown Los Angeles at a time when crime and homelessness have complicated the pandemic recovery. While apartment demand has recovered, hotel occupancy still lags behind pre-pandemic levels, according to data provider STR. Office buildings, meanwhile, remain largely empty and numerous restaurants and shops never reopened.

The development will rise in the Bunker Hill neighborhood, a short drive from Crypto.com Arena, the newly rebranded home of the National Basketball Association’s Lakers and Clippers. There are other large proposed projects in the area, including a redevelopment of the former offices of the Los Angeles Times and a proposed $2 billion, 10-building complex near the city’s Skid Row. The Grand by Gehry, a $1 billion mixed-use development by New York-based Related Cos. and designed by Frank Gehry, is opening this year.

Homeless encampments and rising crime have fueled a sense of lawlessness that is keeping residents and businesses away from downtown, according to MacFarlane, whose firm was a development partner on projects including New York’s Time Warner Center and 15 Central Park West. He’s optimistic LA is ready to do a better job addressing the problems.

“People have gotten tired and they’re now going to get serious about homelessness and crime,” MacFarlane said. “And that moment ties in perfectly with our project.”