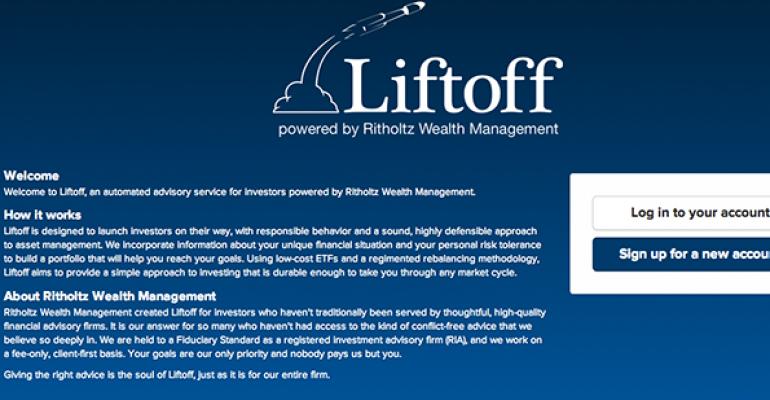 Are Josh Brown and Barry Ritholtz going into battle with the “robo-advisors,” or joining them?

On Wednesday the duo—popular bloggers, ubiquitous denizens of Twitter and co-captains of the registered independent advisory firm Ritholtz Wealth Management—announced they were working with Upside, a one-year-old tech company which has developed an automated, online financial planning and investment platform to be white-labeled by financial planners who want to compete with the likes of Wealthfront, Betterment or Futureadvisor, according to Upside. The goal is to get next-generation investors who are more comfortable with online investment platforms and who “haven't traditionally been served by thoughtful, high-quality financial advisory firms,” according to the RWM site.

Called Liftoff, the RWM platform takes investors through a handful of risk-tolerance questions, then asks if you are looking to create a retirement plan, a financial goal plan or if you are looking just to invest. The securities underlying the plans are a combination of ETFs, with, according to the site, a “regimented rebalancing strategy” automatically built in. The service promises a “sound, highly defensible” approach to asset management. Minimum requirement is $5,000, and the fee is 40 basis points to start, although that might come down as assets flow into the platform, Ritholtz said.

RWM is the first firm to white-label Upside’s platform. Upside was created last year by Tom Kimberly, formerly of McKinsey Consultants and Barclays bank, with his UPenn fraternity brother Juney Ham, the former director of online marketing for Airbnb. The duo have raised a bit over $1 million for the venture, according to Techcrunch.

Beyond being white-labeled by real flesh-and-blood advisors, it’s difficult to see where this really differs from the first wave of so-called robo-advisors, many of which have raised exponentially more money than Upside so far, with various flavors of service models, client targets and complexity. Business Insider calls Liftoff the "the first robo advisor for young people," but Wealthfront CEO Adam Nash has specifically made it a point of differentiation to go after the millennial generation, and other providers of online investment platforms would also say they want to appeal to younger investors.

Financial advisor Ric Edelman created an online planning platform for retail investors with a $5,000 minimum, and Betterment has also started working with financial advisors. Personal Capital, another so-called "robo advisor" has a staff of flesh-and-blood advisors on hand to take client calls. Brown has written, mostly positively, about the robo-advisors invading the retail financial advisory space, suggesting they serve a useful role for beginning or younger investors who might otherwise be gouged by unscrupulous brokers or worn down by high fees more appropriate for HNW investors. “At the end of the day, those clients of the robo advisors who prosper most in life and business will eventually amass too much money and leave for a real human advisor,” he wrote. For users of Liftoff, maybe that next step will be a real-life meeting with Ritholtz Wealth Management.

“There is an entire generation that grew up watching the dot coms implode, watching the housing market implode, watching all these other things go bad; and they legitimately are distrustful of Wall Street and they’re somewhat distrustful of advisors," Ritholtz said. "But they’re very comfortable with technology, and we think this provides a straight-forward simple approach that says to that generation, ‘Hey, you need to start thinking about retirement, even though you’re 25.’”

Helaine Olen, author of Pound Foolish, celebrated National Coffee Day – Sept. 29 - by engaging in an epic rant against the notion that forgoing a $4 latte a day can bring eventual wealth and riches to middle class strivers. The “latte factor” has been an old trope of some advisors and popularized by personal finance gurus like Suze Orman and David Bach, whose 1999 book Smart Women Finish Rich suggested giving up a latte a day could net a saver $2 million over their lifetime, according to Olen, who points out he was assuming the price of lattes would double to $5 and that money would compound at 11 percent annually (It was 1999, she says.)

The notion was popularized when Bach made the argument on the Oprah Winfrey show. But the latte factor is bunk, according to Olen, who cites research by Elizabeth Warren and Queens College’s Joseph Cohen, that the real culprits to middle class millionairdom are the fact that fixed costs, like healthcare, education and child care, are rising far faster than middle-class incomes. Bach is now an executive with financial advisor Ric Edelman's firm. - New York magazine.

Memphis-based Wunderlich Securities bought the wealth management assets of New York firm Dominick & Dominick LLC; the combined firm will have some 600 associates and $10 billion in assets. Dominick & Dominick is one of the oldest Wall Street firms, founded in the 1870s.