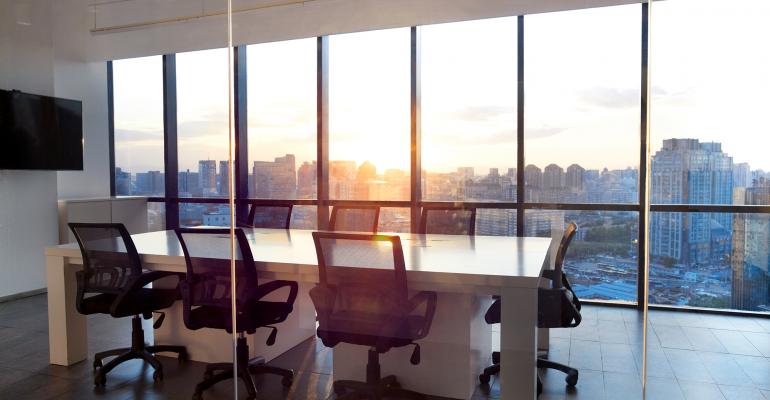 About a third of all of this year’s CMBS loans tied to single properties helped finance class-A office towers in urban centers.

(Bloomberg)—Investors are pouring money into bonds backed by U.S. offices, shrugging off concerns about whether workers will ever fill them up like they did before the pandemic.

About a third of all of this year’s commercial mortgage backed securities tied to single properties -- nearly $4 billion in total -- have helped finance prime office towers in large city centers, according to data compiled by Bloomberg. That’s despite the fact that Covid-19 has eviscerated demand for office space, decimating rents and slashing valuations.

There’s no consensus on when a vaccinated workforce might, if ever, flock back, but the industry forecast isn’t great. Office demand may fall 10% to 31%, Deutsche Bank AG analysts said Wednesday.

Investors’ robust appetite for office-tower debt may be less a vote of confidence for the return of the urban office sector and more a straightforward hunt for yield in a tight credit-market environment, money managers say.

“A lot of crossover corporate-bond buyers are looking at these office CMBS transactions for that incremental yield,” said Jen Ripper, a CMBS investment specialist at Penn Mutual Asset Management in Horsham, Pennsylvania. “But in the near term, there’s a lot of uncertainty for the urban office market, and rents, as well as vacancy rates, are under pressure as leases roll off. There are just too many question marks on the safest way to bring people back.”

These securitized bonds, known as single-asset single-borrower CMBS, can offer higher yields than other asset-backed debt and corporate paper, and they are often floating-rate securities, an alluring quality at a time when many foresee interest rates rising. SASB securities have built-in safeguards to protect investors in the senior notes in case cash flows suffer, and are underpinned by top-quality assets, making buyers more comfortable, especially for the AAA tranches, Ripper said.

The AAA rated slice of Wednesday’s Durst transaction priced at 98 basis points over a swap-spread benchmark for 10-year paper. That compares to a spread of only about 78 basis points over swaps for an average single A rated corporate bond with a seven- to nine-year duration, according to Deutsche Bank.

Sales of SASB deals and so-called commercial real estate collateralized loan obligations will likely keep outpacing issuance of what is typically the more popular type of CMBS, known as conduits, in the second quarter, according to analysts at Bank of America Corp. Conduit deals are backed by dozens of different loans from various property sectors, including retail, hotels and industrial real estate.

Overall private-label CMBS issuance stands at $29.5 billion this year, 19% higher than at this point in 2020.

“It appears that the gradual return of office workers will play out over several years, and no one knows if occupancy will then achieve anywhere near its previous levels,” said Christopher Sullivan, chief investment officer of the United Nations Federal Credit Union.

--With assistance from Allan Lopez and Jack Pitcher.