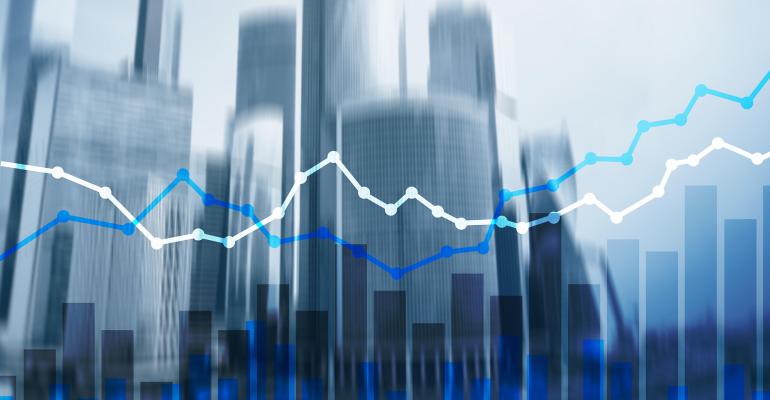 Several recent conduits offer a glimmer of hope that the market will find its footing again.

The CMBS market is still reeling from turbulence created in the wake of Fed rate hikes and interest rate volatility.

Steady activity during the first few months of the year helped lift U.S. CMBS issuance volume to $47.2 billion in the first half of the year, slightly ahead of the $46.3 billion during the same period a year ago, according to Trepp. However, new issuance virtually ground to a halt in June and July forcing many potential borrowers to look for alternatives.

Related: CRE CLO Originations Are on the Rise This Year. But Loan Terms Are Less Attractive.

“CMBS is still functioning, but a lot of borrowers are going elsewhere,” says Jeff Erxleben, president of debt & equity at Northmarq. “There are a lot of challenges with getting a CMBS loan done today, outside of the overall structure of it.” One of the biggest hurdles from a borrower’s perspective is not knowing key details until they get to the closing table. Will a loan close on time with proceeds and terms that you originally thought you were going to have? “Those main elements have been a little bit of a question mark, and there have been deliverability issues with that product,” says Erxleben.

CMBS has traditionally been a good fit for very large loan requirements, as well as those deals where other lenders didn’t really want to lend, such as a market that was overweight from other lenders or perhaps underperforming. However, some of the factors creating bumps for CMBS conduit issuance is the lender’s ability to have transparency into the securitization market. A borrower goes through the process of filling out an application with terms, but in a lot of cases, the borrower won’t know the final spread, final loan amount and final terms on that deal until a day or two before closing, notes Erxleben. “That ambiguity is tough to deal with for most borrowers,” he says.

Related: Will Unibail-Rodamco-Westfield’s Planned Mall Selloff Cause a CMBS Problem?

Despite recent disruption, there are some glimmers of stability starting to come through. According to Trepp, two CMBS conduits priced in mid-August and a third one is in the market. That is a positive sign as it shows that the CMBS capital spigot hasn’t completely shut off and deals are still getting done.

“However, it is unclear if the second half of the year will be able to recover from the rate volatility and keep pace with 2021,” says Rob Jordan, head of CMBS Product at Trepp. The 2021 U.S. CMBS issuance volume reached $109.1 billion. In addition, warehouse lines are becoming less accommodating for issuers. So, more capital is being required to hold loans, which hurts the overall issuance economics, adds Jordan.

“As we know, there is significant uncertainty in the market. Even with all of that, savvy CMBS investors are taking advantage of higher benchmark rates and wider bond spreads, particularly in the up-in-credit sectors where credit, structure, and liquidity are best,” says Pendergast.

However, the numbers continue to show a growing gap between CMBS conduit and SASB issuance with SASB issuance nearly double that of conduits at $30.5 billion in the first half, according to Trepp.

In particular, SASB CMBS remains attractive to investors due to the significant institutional sponsorship and asset quality, large, liquid tranche sizes and the floating rate nature of the underlying loan and the bonds that loan secures, notes Pendergast. “Investors are keenly focused on levering their portfolios to floating-rate asset classes to take advantage of increasing benchmark rates as recent economic data suggest further Fed rate hikes are in the offing,” says Pendergast. Some examples of those indicators include a significant jump in jump in payrolls by 528,000, an uptick in the ISM survey, and robust consumer spending, she adds.

On a positive note, delinquencies and distressed CMBS loans appear to be moving in the right direction. Delinquencies have improved dramatically to 3.06 percent since hitting market highs of 10.32 percent in June of 2020, according to Trepp. Lodging and retail remain elevated at 6.7 percent and 5.6 percent, respectively, but both have notched significant improvement in the past 18 months.

One of the more interesting developments since the outset of the pandemic is the muted negative impact on loan performance, notes Pendergast. “The current delinquency rate speaks volumes to the more conservative underwriting of these vintages, the forbearance shown by the servicing community, and of course the federal and state government assistance provided to all sectors of the U.S. economy during the worst periods of COVID,” she says.

That being said, there is still considerable uncertainty that is weighing on the market around inflation, Fed action and the possibility of a recession or perhaps stagflation. “With such concerns afloat, it’s not terribly surprising that a recent Fed banking report highlighted that bank CRE lending standards are becoming ever more conservative, while at the same time lenders are experiencing less loan demand from CRE borrowers,” says Pendergast.

Rising interest rates and a possible recession would certainly add more stress to already struggling assets. “If rates remain high, there could be refinance risk in some of the maturities farther out in time. However, most recent year issuance at low rates, significant duration and their low carry costs should cushion most near-term delinquencies in recent vintages,” notes Jordan.