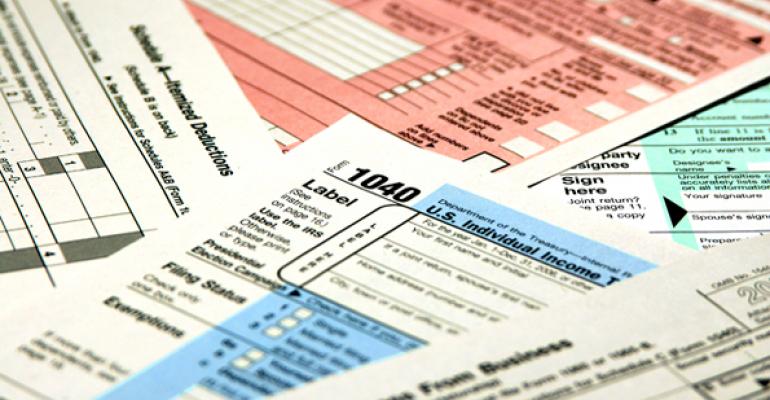 (Bloomberg) --Are millions of Americans just forgetting to file their taxes this year?

Tax professionals often discuss tax seasons the same way live performers talk about audiences. Each one is different, they say, with its own mood, rhythm, and political undercurrents.

There are several possible explanations for why taxpayers aren’t filing.

“Customers waiting longer to file their returns is a trend we have observed for the last four years, although it’s more pronounced this year,” said Sanjay Baskaran, president of online tax preparer TaxAct.

More and more people who used to file in January and February are waiting until the last minute. Last year, IRS data on April 15—the traditional tax deadline—showed individual filings running 5.8 percent behind the previous year. But the deadline was April 18 in 2016, which gave taxpayers an additional three days to file. In the week following April 15, a whopping 12 million tax returns came in, and filings ended up 1.7 percent higher than in the previous year.

The political rhetoric of President Donald Trump may be scaring some taxpayers. With the Republican promising to crack down on illegal immigration, undocumented immigrants may be afraid to create a paper trail with the government by claiming tax refunds.

John Hewitt, chairman and chief executive of Liberty Tax, raised the possibility in a call with analysts March 8. Undocumented immigrants often use individual taxpayer identification numbers (ITINs) rather than Social Security numbers to file. “Those ITIN filers are filing at a reduced level this year,” Hewitt said. They’re “probably fearful of the Trump initiatives.”

It’s also possible that the overall political atmosphere could be affecting filing. The Trump administration is enforcing the health insurance mandate differently this tax season, while Congress moves quickly to gut the Affordable Care Act, and Trump has promised massive tax cuts. Although no tax code changes would affect what you currently owe, Julie Miller, a spokeswoman for TurboTax owner Intuit Inc., speculated that “there could just be confusion, or [people are] waiting for the dust to settle.”

In an effort to crack down on fraud, Congress passed the PATH Act , which requires the IRS to increase scrutiny of certain tax credits often claimed by low-income households. As a result, the agency warned it wouldn’t issue refunds this year until Feb. 15 for the millions of returns claiming the earned income tax credit or the additional child tax credit.

That delay could be a big factor affecting millions of taxpayers who haven’t filed yet, several analysts and tax company executives said. While issues with undocumented immigrant returns may be a “fringe factor,” the PATH act is the main reason for the delay, said Piper Jaffray analyst George Tong.

“A lot of early season filers want their money and want their money fast,” Tong said. If filings are delayed, “it throws a wrench into consumer behavior.” Liberty’s Hewitt seemed to agree that the refund delays are a larger issue. “The PATH Act has created a massive change in the industry,” he said.

The PATH Act affects taxpayers claiming the earned income and additional child tax credits–about 27 million people claimed the EITC last year–but other taxpayers may wrongly think the rule changes affect them, sowing confusion. “Many people assumed this was the holding of refunds until [mid-February] for everyone,” said Michael Millman of Millman Research Associates.

H&R Block Chief Executive Officer Bill Cobb cited this “uncertainty” as a factor in delayed filings. “Taxpayers who typically file in January and early February appear to be less motivated to file quickly, given that their refunds may be delayed,” Cobb said in an earnings call on March 7.

Delay all you want—until April 18, that is, when your filing is due—but you’ll pay for that procrastination: Tax prep companies punish late filers by hiking their prices as the tax deadline approaches.