Tom Kennedy discusses what it's like to shift from the wholesale business to the advisory business. 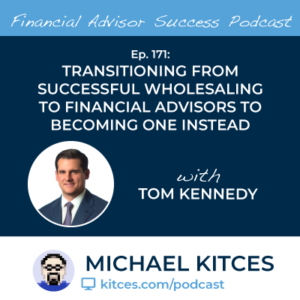 Welcome back to the 171st episode of Financial Advisor Success Podcast!

My guest on today’s podcast is Tom Kennedy. Tom is a wealth advisor at Global Wealth Advisors, a hybrid advisory firm based in Houston, Texas where Tom works with a base of nearly 400 clients.

What’s unique about Tom, though, is that he made the transition into being a financial advisor from a successful 10-year career of working as a wholesaler to advisors, allowing him to get intimately familiar with the advisory firms in his area and network his way to a firm that was acquiring a book of 400 clients at the exact moment that Tom was ready to make a transition.

In this episode, we talk in-depth about what it’s like to shift from the wholesaler business to the advisory business. How the required skillset of wholesalers to meet with and talk to lots of people is a natural fit for working as an advisor as well, the way the advisory business allows for more and deeper relationships than the traditional volume of required meetings for wholesalers, the appeal of shifting into an advisory business where every year doesn’t start back at $0 the way the commission-based wholesaling business does, and the real-world challenges of making a transition away from a wholesaling job that typically pays far more in the short run than most advisory firms could feasibly offer, but why it was still appealing to Tom to make the shift anyway, for its long-run potential in the advisory business.

We also talk about how Tom actually made the transition itself. Why he decided to get a CFP certification while he was still working as a wholesaler, the way he approached firms to interview for opportunities, how he assessed the various firms that he was coming in contact with to figure out which would be the best for him to work with as an advisor, and why, even as someone with deep experience and a natural skillset for business development, it was still more appealing for him to find a role where he could take over an existing book of clients and not just start developing his own client base from scratch.

And be certain to listen to the end, where Tom shares why, despite the long-term earning potential of the advisory business, he found it appealing first and foremost as a change in work-life balance from the 10-year grind as a wholesaler, the biggest surprise to him in transitioning from an employee-wholesaler model to becoming an independent advisor, about what it really means to be an independent business owner, and the lessons that Tom incorporated into starting his advisory firm based on what he’d seen as best practices in other firms from all his wholesaling years.