Lawrence Financial Planning's Forrest Baumhover details his transition from serving in the Navy to financial planning. 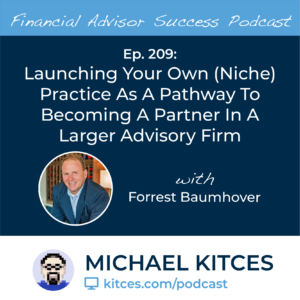 Welcome back to the 209th episode of the Financial Advisor Success Podcast!

My guest on today’s podcast is Forrest Baumhover. Forrest is a financial advisor and partner with Lawrence Financial Planning, an independent RIA based in Tampa, Florida that oversees more than $100 million of assets under management for 70 affluent clients. What’s unique about Forrest, though, was his path to partnership as a financial advisor, having launched as a career changer coming out of the military with the niche of serving other military veterans in transition, only to find that his options and opportunities to become a partner in an existing advisory firm grew even more quickly than the niche that he had started out building on his own.

In this episode, we talk in-depth about how Forrest set the stage for his career-changing transition from the Navy into financial planning, why Forrest chose to complete his CFP education, his Enrolled Agent license, his Series 65, and even the creation of his RIA entity all before he even finished his military service and reached his transition date. How Forrest further set the groundwork for his initial stages of business development by setting up a blog and beginning to write articles in his prospective niche, and the organizations that Forrest joined early on, from Toastmasters to the Alliance of Comprehensive Planners and his local Chamber of Commerce, all to begin the networking that he would need to do to be successful when he launched his firm.

We also talked about what led Forrest towards a path of merging his advisory firm into a larger one just as his niche was starting to gain traction, how he weighed the decision of whether to stick with his current independent practice or walk away from it in order to be a part of something even larger instead. The way that the work that Forrest had done in preparing for and then building his own firm ended out accelerating the trust curve when he decided to merge and how Forrest structured the partnership buy-in with his current firm to become a partner.

And be certain to listen to the end where Forrest shares his thoughts on the challenges of launching an advisory firm from scratch, even when you think you’re prepared and still have to adjust when reality hits, the importance of having a plan and sticking to it but also being prepared to pivot if a new opportunity comes along. And his philosophy that in the end, it’s not about whether your firm ends out being exactly what you’d envisioned from the start, but simply whether you finish in the general ballpark of where you were trying to get in the first place.

So whether you’re interested in learning about why Forrest decided to pursue a career in financial planning after leaving the military, how he started writing articles in his niche that eventually led him to publish a book, or how he pivoted from firm owner to partner, then we hope you enjoy this episode of the Financial Advisor Success podcast.