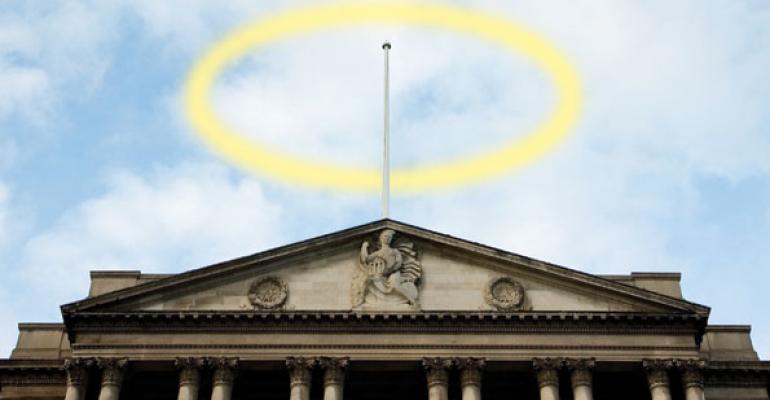 Few community banks and credit unions offer wealth management services to their customers. But many of these firms are struggling and looking for new sources of income. Broker/dealers are finally tapping these untouched firms with revenue-sharing partnerships.

Small community banks and credit unions have largely remained the wild, wild west when it comes to wealth management—an untapped market. Only about a quarter of them now offer an investment program for clients through revenue-sharing partnerships with broker/dealers.

Broker/dealers have long fought over this small population of banks that already offer wealth management to clients, and they continue to steal relationships away from one another. But they’re starting to jump into bed with the rest of the community banks and credit unions, too, smaller firms that until now were reluctant to risk venturing into totally new business lines and that seemed too small to be worth the cost of start-up anyway. Forming these partnerships with broker/dealers is complex and it doesn’t come cheap. There are a lot of moving parts, plus the banks want to be sure to protect their valuable client relationships, maintaining control of accounts and quality of service.

So what changed? Times are tight. A huge source of revenue for community banks and credit unions has dried up—with interest rates near zero percent, spread income is taking a hit. Wealth management offers a predictable revenue stream to fill in the gap for these increasingly strapped firms. The additional income can be significant. For example, in its second full year, the investments program at Commercial Banking Company in Valdosta, Ga., a partnership with PrimeVest, produced a 13-percent net increase in non-interest income for the bank. Plus, as more and more firms begin offering investment services it’s becoming more important to have them in the service lineup so that clients don’t walk. The obvious advantage for partnering b/ds: a new source of captive clients.

Raymond James is working on new programs with MVB Bank in West Virginia, and City Bank in Texas. In fact, the broker/dealer has added seven financial institution relationships this year, five of which had no existing program. Last year, only one of the banks Raymond James added was a start up. And in the last six months, LPL Financial has added several banks with start-up programs, including Burke & Herbert Bank & Trust Company in Alexandria, Va., Atlantic Stewardship Bank in Midland Park, N.J., and Florida Commerce Credit Union in Tallahassee, Fla. PrimeVest, a Cetera broker/dealer that is primarily built on partnerships with banks, signed a total of 21 in 2011, seven of which were new programs, compared to 24 in 2010, five of which were start-ups. Year-to-date, PrimeVest has added five new bank relationships, including two new programs.

Meanwhile, Infinex Financial Group, a broker/dealer made up entirely of bank and credit union advisors, recently partnered with Old Line Bank in Bowie, Md., to start a new investment program. W. Jere Colcer, senior vice president of business development and marketing, says the firm is on track to add about 20 banks this year, at least half of which have no investment program. (Last year, Infinex signed 23 banks, but only two of them had no existing investment program.)

For novice financial advisors, the community bank channel holds some appeal. It can provide advisors with a structured, team environment, one with a natural source of referrals—bank clients. The downside is that advisors in this channel don’t own their books of business the way advisors and independent broker/dealers do. Client relationships are “owned” by the bank or credit union, so it’s harder to jump ship if the advisor wants to move on to bigger business later.

For small banks, the profit outlook isn’t great.Not only is spread income down, but a major source of profits on the consumer banking side—overdraft fees—have been capped by regulation, says Dr. Kenneth Kehrer, principal of consulting firm KehrerSaltzman & Associates.

“If you look at the profitability of the banks, it has come down by 3, 4, 5, 6 points in terms of ROE because of the pricing of deposits, they make no spread anymore, because of increased regulatory costs, because, even on the lending side, they have less volume,” says Gauthier Vincent, senior executive advisor at Booz & Co. “Their profits have been squeezed, so they’re looking for new ways to grow the bottom line. And everyone is saying wealth might be the opportunity.”

Will that translate into actual growth? No one seems to know, yet. For the past several years, the share of banks offering investment services has remained steady at around one quarter, according to Kehrer’s research. It was around 24 percent in 2008 and 24.9 percent in 2011.

It’s hard to predict how many new partnerships may materialize longer term, but Kehrer expects to see 10 percent of those banks or credit unions not selling investments to start a program, which would mean about 550 new partnerships over the next three to five years.

For broker/dealers it’s an opportunity to access captive bank clients on their own turf. “There’s a huge opportunity out there for these third party broker/dealers to really expand the size of the market by moving into banks that have not sold investments before,” Kehrer says.

That’s exactly what Securities America, Ladenburg Thalmann’s newest broker/dealer, was thinking when it hired Mike Anderson this year to lead its financial institutions business and ramp up the b/d’s presence in this channel.

“For us, this is a new strategy,” Anderson says. “The ocean’s pretty big, so where do you want to go? Find where nobody else is, but it’s still a target-rich environment.”

“If you’re the broker/dealer, you’re saying, ‘What other distribution can I get?’” says said Tim Welsh, president of industry consultant Nexus Strategy. “‘We’re tapped out here in our independent channel. We’re recruiting, but we’re basically just stealing advisors from each other. But here’s a whole new channel, these banks, that we can go after and tap in and have that added distribution through the bank channel.”

Either their affluent clients’ assets are held somewhere else, or their assets are sleeping at the credit union, Vincent says. They don’t have the scale and the critical mass to build the wealth management infrastructure, so they turn to partners.

Structure of the Relationship

The structure of these partnerships between broker/dealers and banks differ from relationship to relationship. Typically, a bank can choose any level of involvement they want in working with a third party b/d, says Cerulli’s Smith.

The most common structure, Kehrer says, is what’s called a “dual employee” arrangement, in which the rep is an employee of the bank. The advisor is then supervised by the b/d on securities activity. In this arrangement, the b/d pays the bank a share of the revenue generated from client accounts, and the bank then pays out a portion to the advisor.

Typically about 80 to 95 percent of revenue goes to the bank, says Dan Mallard, vice president and national sales manager for Raymond James’ financial institutions division, but their share depends on the size of the program and product mix. The range is so high because the bank is paying the advisors and providing the sales management. Typically brokers get a payout of 30 to 40 percent in the bank channel, Kehrer says.

In other situations, the registered rep is an independent contractor, with no employment relationship with the bank. The b/d pays the rep directly and then separately pays the bank a share of the revenue.

The financial services industry is not known to have a lot of good training programs for rookie advisors. A few firms have tried and have some of the stronger programs in the industry, such as Edward Jones, Ameriprise Financial, and Merrill Lynch. But training is hard to come by, for the most part, and banks, with their natural referrals, could be a good training ground.

Banks provide a place where advisors can enter the industry because they can build a book of business without having to do a lot of cold calling, says Cerulli’s Smith. The advisor is getting hot leads from the banking personnel, who refer their clients to the advisor. At the same time, the bank tends to have a relationship with trust of some kind with that client, so it shouldn’t be too hard for the advisor to pitch their investment management services.

The bank is also a way for the broker/dealer to fatten up their struggling reps who aren’t good at drumming up customers, Kehrer says.  “If I’m Joe advisor and my office is in a strip mall, there isn’t anybody walking clients over to my desk,” says Securities America’s Anderson.

But to get those referrals, reps need to build credibility with the bank’s loan officers, tellers, and management, Anderson adds.

They also have to be able to function in a structured, team environment, where the rep has to acknowledge and respect the other products and services offered by that bank, says Steve Dowden, president and CEO of INVEST Financial Corporation, which also has a bank channel. They no longer work as a sole proprietor, but as a team, and it might be hard for some people to adapt to that environment.

The constant flow of referrals from the bank does come at a price. The downside is that the bank owns that client relationship, and thus, the financial advisor’s book of business, in most cases. When the partnership is dual-employee, which is most cases, the advisor typically has to sign a contract with the bank to keep the broker from leaving and taking customers with them, Kehrer says.

In fact, according to Cerulli data, bank advisors are the least likely to take their book of business with them when leaving their firm. It’s difficult for them to build up a book at the bank and then go independent.

That said, Booz & Co.’s Vincent says there’s nothing stopping their clients from moving over to the new broker/dealer or bank on their own. If their financial advisor moves, that’s going to be a pull for the client to move because they have an established relationship with that advisor.