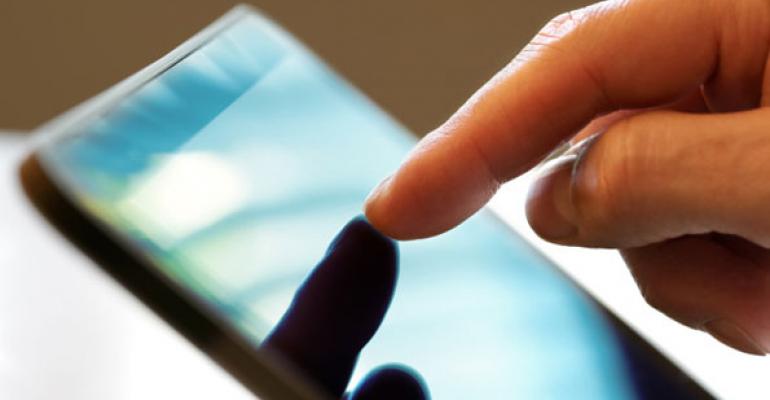 Advisors Ditch the Macbook for the iPad

When it comes to doing work on the go, advisors are trading in their laptops for tablet devices, a new survey shows.

Are laptop computers on their way to becoming obsolete? Most advisors said they use their tablet as a replacement for a laptop when they’re doing work on the go, according to a recent survey by Booz & Company.

Of the 100 advisors Booz surveyed, 80 percent of them said they use the iPad as a replacement for the laptop when they’re on the road or on vacation. Seventy-five percent also said it replaces their laptop outside working hours.

Some brokerage firms and custodians are rolling out tablet applications with the advisors’ work-day in mind, said Kunal Vaed, principal with Booz & Co., driving the increased use of tablets among advisors. Firms are taking some of the functionality that advisors might use on the laptop, and designing that functionality into tablet-friendly format.

“The fear that we always heard when we talk to the management of some of these brokerages was, ‘It’s going to become just another gaming device,’” Vaed said.

“Here’s an opportunity to see how does an advisor typically plan his or her day, and finding out what’s the best application of a tablet in that day-to-day working. When he’s on the road, then these are the typical things he or she would do, hence that’s what should be on the tablet.”

Many of the applications used by advisors on their laptop are now available on a tablet, such as financial planning, book of business management, contact management, and market news and data, Vaed added. And these applications are easier to use and more intuitive on the tablet.

Early last year, Fidelity Investments rolled out an iPad application that allows advisors to view client accounts, place orders and track activity. UBS also has a tablet application for advisors that includes email, contact management, access to research and customer account details. In November, Schwab launched an iPad app for its advisors, with the ability to access key client data such as balances, positions and transactions. Advisors can also see daily account movements and scrolling quotes.

“If those applications are available on the tablet, then there is very limited utility of a laptop,” Vaed said.

Vaed believes it’s very likely that tablets will replace laptops for work on the go, and this will be an accelerating trend in the next two to five years. And the trend is already catching on with both younger and older advisors. Of advisors under age 40, 94 percent said they already use tablets, according to the Booz & Co. survey. For those over 60 years old, 88 percent use tablets.

Increased regulations will also push more firms to use tablets. Regulations are putting a greater emphasis on documentation and recording of advisors’ contact with clients.

“What a tablet does is it lets you record some of this information on the go,” Vaed said.

Tablet devices also automate back- and middle-office functions, by facilitating straight-through processing of transactions without having to enter it manually.

The technology can also provide firms with a greater ability to influence advisors’ use of best practices. While the advisor business tends to be very entrepreneurial, there is some inconsistency in the advice being delivered to clients, Vaed said. Tablets make it easier for firms to enforce best practices.

“If all they offered to their advisors was 10 icons on a tablet app, they can at some level guide their advisors toward a best practice behavior,” Vaed said. 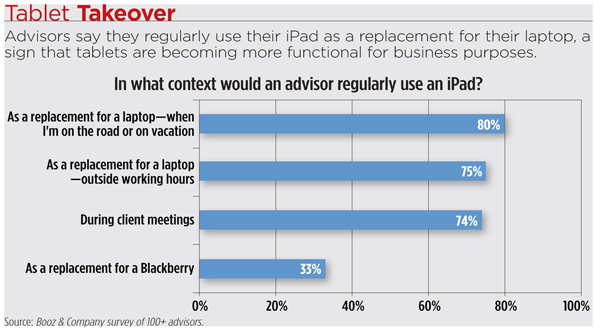