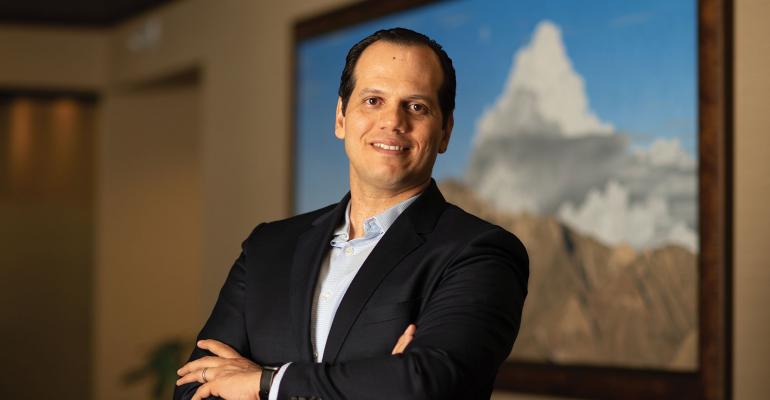 Advising Beyond the Language Barrier

The wealth management industry in the U.S. was built by, and for, native U.S. English speakers. But that just means there’s a growing opportunity.

Like many financial planners, Miguel Gomez fields the usual client questions about 401(k) enrollments and how best to transfer assets between parents and children. He answers inquiries about budgeting, sends out quarterly reports and fine-tunes financial plans. In the past five years, the El Paso, Texas-based advisor, who works at Lauterbach Financial Advisors, has even launched a podcast on personal finance, netting thousands of downloads per month.

But one thing that stands out about his approach—in both the advice he gives to clients and on his podcast—is that the majority of the information is shared in Spanish.

Gomez, recently named president of XY Planning Network’s diversity and inclusion committee, is part of a wave of advisors who have found an advantage in—and market for—guiding U.S.-based clients who prefer not to use English as their primary language when it comes to talking about their financial resources and plans. He works with a range of clients from Texans to high-net-worth individuals with assets spread across the globe. While a few of his clients don’t understand English, many are highly educated and multilingual but just prefer to do business with someone who speaks the same native tongue.

In fact, the clients Gomez serves are a growing slice—numbering in the tens of millions—of the U.S. population. Since 1980, U.S. residents have been nearly twice as likely to speak a language other than English at home, according to 2016 U.S. Census data. Those non-English-speaking households aren’t just concentrated in Texas, where Gomez works. Many major metropolitan areas, from Los Angeles to Boston, are home to significant populations of non-English speakers.

And while many non-native English speakers in the U.S. are first generation immigrants without the assets that would make them a candidate for a full-service financial advisor, Gomez and others say that generalization misses the point; many non-native English speakers have significant assets and arguably a greater need for an advisor that understands their priorities.

Even for firms without non-English-speaking advisors, it’s a trend worth studying. Advising non-English-speaking investors could prove a partial antidote to the handwringing accompanying the so-called Great Wealth Transfer, said advisors who work closely with non-English-speaking clients. The family dynamics and sense of community often found among these investors mean clients treat advisors less like service providers and more like extended family, according to some advisors. Multilingual advisors are able to communicate with parents in one language and children in another, forming a bond with both.

But wealth management as a whole has been slow to capitalize on the opportunity. While technology democratizes access to financial services, access points at both retail and advisor levels are overwhelmingly built around native English speakers. In an industry so dependent on trust, introductory foreign language classes and machine translators won’t be useful. “It’s more than a bilingual thing; it’s a bicultural thing,” warns Gomez.

When it comes to wealthtech, the U.S. is the biggest and most vibrant market in the world. At a fintech event sponsored by Netguru earlier this year, executives from European startup banks like N26 and Revolut discussed how they were ill-prepared for the level of competition that exists in the U.S. Automated advice platforms are stretching their tentacles into banking, while wealthtech vendors develop tools that will allow advisors to inch closer to roles traditionally played by bankers. With a large sum of wealth and a large population, the U.S. domestic market is big  enough for software companies born here to become robust businesses.

But that’s a double-edged sword. The domestic market is not monolithic, and if an advisor needs to generate a quarterly report or provide access to a client portal in a language other than English, many are out of luck. Niche technology players have stepped in to fill the void, but like many small tech providers, they’ve struggled to grow.

Latino-focused robo advisor Finhabits has built a digital advisor for U.S.-based Spanish speakers, but it’s a mistake to think of it as simply a Spanish-language robo. Its founder and CEO, Carlos Garcia, said the firm is sophisticated enough to capture what region of Latin America its users identify with, differentiating between investors with a Mexican heritage or a Chilean one, for example. It includes that information in its communications strategy, which is key to customer retention. “Any other firm can have its service in Spanish,” he said, “what differentiates is understanding user behavior.”

But growth has been slow. The New York City-based firm has just $11 million in AUM across more than 32,000 accounts, according to its most recent regulatory filings. The company first began accepting investors in February 2017.

Digital financial guidance and education platform My Money My Future is another tech startup for Spanish speakers. “Our target market is multicultural millennials, many of whom are bilingual but prefer, or speak, English as their primary language of choice for business matters,” explained Founder and CEO Ramona Ortega. She said the firm, which plans to relaunch its Spanish-language content this year, wants to be a bridge between the millennial “Spanglish” community and financial advisors.

Even industry behemoths like Vanguard take a decidedly low-tech approach to non-English speakers. Non-English-speaking clients making a call to the firm’s advisors as part of its tech-forward Personal Advisor Services will need to wait while the firm finds an advisor who speaks the language preferred by the investor. “We don’t have a ton of non-English-speaking clients,” said a company spokesperson. Vanguard declined to disclose how many of its advisors speak a language other than English.

Equisoft’s location in Montreal lends itself to building applications bilingually, said Jonathan Georges, vice president of the firm’s wealth management solutions division, given the bilingual population. Another factor is Canadian technology’s naturally outward-facing nature. “Because of the relatively small size of the market, Canadian tech vendors are always having in the back of their minds that to be viable, we’ve got to be thinking beyond our own borders,” he explained. In contrast, he said, the typical U.S. tech startup has a large enough domestic market to ease that concern. But that means the English-centric technology doesn’t always jibe with America’s demographic trends.

For wealth management professionals interested in tapping into non-English-speaking markets, nuance is key, said advisors and technologists. While sharing a common non-English language makes clients more comfortable, the true advantage is a common culture, said Suk Pau, vice president and managing partner at The Wealth Consulting Group. Based out of Cupertino, Calif., Pau has been advising clients who work in Silicon Valley and have lived in the U.S. for decades but who still prefer to have an advisor who speaks Korean.

“Culturally we click,” said Pau. “Whenever I talk about certain topics, they really like the way I approach them, because we are concerned about almost the same thing.” Top priorities for her clients are providing financial security for both parents and children, or paying for a child’s education, she said. Those are the topics that Pau addresses when she’s meeting prospects and new clients.

“It’s not really the lower fees or a higher return, or whatever the latest trend is,” she said. “They feel like I’m taking care of their needs.”

Pau’s approach is almost always inherently multigenerational. “I know almost all of my clients’ children,” she said. “Whenever we do something, a lot of times they want me to explain it to their kids. They kind of bring me into their family.”

“I’m not too worried about the children taking money away,” she added. “A lot of times their children—who are now getting older—they’re calling me and they’re asking for advice, too.”

Being multilingual and multicultural creates reasons for multiple generations of clients to work with a single advisor, agreed Luis Rosa. The founder of Build a Better Financial Future, based out of Henderson, Nev., Rosa said being able to work in two languages, Spanish and English in his case, helps “blunt some of that risk” of children transferring assets away from him as wealth is transferred. “It creates another level of connection,” he explained.

Some financial concepts are best communicated in a non-English language, said Hui-chin Chen, a financial planner at Pavlov Financial Planning in Arlington, Va. She uses Mandarin Chinese and English with her clients. “When I can understand a client’s cultural references that can only be conveyed through Chinese, it creates more [of a] bond and makes a client feel that I understand more than what’s implied,” she noted. “Using our common language allows us to break the barrier of talking about money with a stranger faster.”

“If a client feels more comfortable, we are able to form a deeper relationship,” she added. “If a client has less command of English, it’s helpful to use both languages to get more complicated concepts across.”

What’s a Firm to Do?

Bemoaning a lack of diversity is a common refrain at advisor conferences and among industry groups, but only recently have firms started making actual efforts to appeal to a broader swath of Americans. Pau has been associated with LPL for decades, but it was only within the past few years that the firm provided her with support that nodded to the Korean-language advising she had been doing, she said. Last year the firm announced its inaugural “Inclusion Council,” tasked with creating materials and presentations for groups that tended to be overlooked by the industry.

Ortega noted that the business model for those starting their careers in wealth management, which often necessitates tapping into a deep network of wealthy individuals, makes it more difficult for nonwhites without that access to succeed.

Getting larger financial institutions to recognize there is a viable market on the other side of the language divide is a significant step yet to be taken.

“There has to be a shift from the top,” said Ortega. “I say ‘multicultural’ and they think ‘poor,’” she said.

Firms like Charles Schwab and Facet Wealth, for example, which both offer remotely located advisors for their clients, did not provide information on how they handle multilingual clients or what their language support looks like.

For an industry that preaches the benefits of diversification, a look in the mirror might be necessary. After conducting a yearlong “listening journey” among investment managers, impact investing organization Confluence Philanthropy found that “[r]acial and cultural homogeneity is self-perpetuating.”

“The unseen biases that perpetuate the investment industry are rarely acknowledged and are not well understood,” the report continued. “Investors and consultants source managers through peer networks that are not diverse, and they do not seek access to networks of managers of color. Brand bias prevails, in which larger firms with name recognition or familiarity are preferred, as are minimum threshold requirements of AUM or track records.”

Pau agreed that a change of business model for wealth management would help more non-English speakers enter the industry. “Our profession is a very difficult profession in the beginning, right? It’s a lot of work, a lot of expense, but no income; so, it’s not very attractive,” particularly for those coming from backgrounds where networks of wealth are scarcer or more difficult to tap into.

Education will also play a role, predicted Gomez. With more financial planning degrees available at postsecondary institutions, there is perhaps a better entry point for a more diverse pool of entry-level advisors.

If all that’s not enough, there is the reality of the marketplace: The trend of a decades-long multiculturalism in the U.S. coming up against the needs of large financial institutions to “refill their coffers” will be too much to ignore, said Ortega. “They’ll look at the market and see that millennials are multicultural,” and the millennials are growing up.

“There is a huge opportunity to go after bilingual customers,” she said. “But I would caution that it is not just about speaking a language, but understanding cultural nuances within a community.”