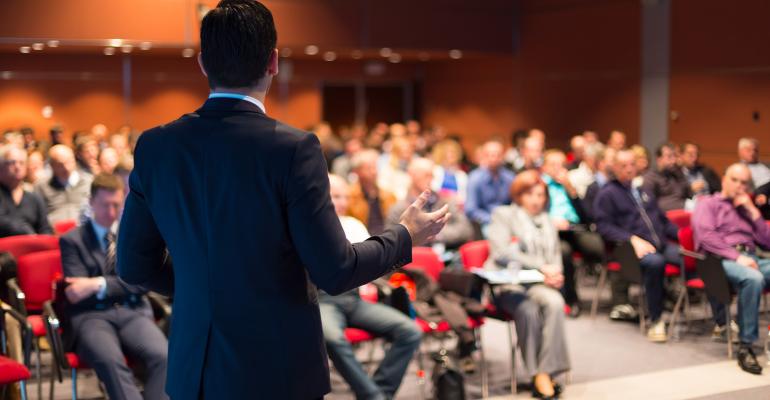 Back to Normal: CRE Conferences Are Nearing Pre-Pandemic Attendance

“This is the first quarter we have seen a return to normal conference season,” says one industry insider.

The major conferences serving the commercial real estate industry are edging closer to pre-pandemic attendance even as some virus restrictions remain in place. Overall, however, industry players are welcoming a greater return of face-to-face meetings to get deals done.

Whether it’s the International Council of Shopping Centers (ICSC) returning to its annual RECon meeting in Las Vegas in May after cancellations in 2020 and 2021, the National Investment Center (NIC) holding its spring and fall meetings in person or the Urban Land Institute (ULI) and NAIOP doing the same, it’s business as usual with a few exceptions.

According to ICSC, which has been holding in-person events since October, more than 22,000 people showed up at RECon in Las Vegas last month, a decline from the more than 30,000 people that attended the event in May 2019.

That attendance was higher than expected, notes Stephanie​ Cegielski, ICSC’s vice president, research and public relations. Meanwhile, the ICSC Florida event scheduled for Aug. 28 to 30 in Orlando is expected to be on par with pre-pandemic attendance. Neither convention required proof of vaccination for registration unlike some conferences across the country.

Related: In-Person and In Demand: Live Real Estate Conferences Are Making a Comeback

“This is the first conference in two years that we went to,” says David Gabbai, an Orlando-based retail broker with commercial real estate services firm Colliers who attended RECon in May. “It wasn’t a return to normal, but the quality of the show was surprisingly good. We expected the show to not be as well attended and the quality of meetings not to be as good as they were. It was upbeat, even with the expected downturn in the economy. It didn’t deter the level of enthusiasm.”

While productive, this year’s conference was shortened to one and two-thirds of a day instead of the previous two and a half days, he notes. That meant connecting with fewer people for Gabbai who represents such restaurant brands as Olive Garden, Longhorn Steakhouse and Buffalo Wild Wings, among others.

“It cut down on the amount of meeting time that we had available to us because most people did not want to come in on Tuesday,” Gabbai notes. “They wanted to go home with fewer direct flights. It changed the way things were done with dinners, parties and social aspects of the business.”

According to Cegielski, ICSC decided to end the show on Tuesday because of historically low attendance on the third day. ICSC New York, the organization’s second biggest annual event, is scheduled for December 6-8.

“I am looking forward to the normalcy of the New York show, which is great for planning for the following year and a more relaxed atmosphere than Las Vegas is,” Gabbai says. “Orlando and New York will be a normal show. The fear of the pandemic is behind us. We have treatments for COVID, and it’s not as prevalent and risky to one’s health with a lesser strain.”

NAIOP returned to in-person meetings in the summer of 2021 and attendance has steadily increased since then and even surpassed its pre-pandemic levels, according to NAIOP President and CEO Thomas Bisacquino.

Organization members have been experiencing “Zoom fatigue” and have been eager to meet in person, Bisacquino says. NAIOP held a hybrid in-person/remote annual event in Miami in September and hasn’t done so since. At NAIOP’s August 2021 event in Long Beach, Calif. attendance was at 75 percent of its normal level. Last September’s event in Miami was at 85 percent of pre-pandemic attendance, with 1,000 people. By the time of the industrial meeting in Jersey City, N.J. in November and another industrial meeting in Long Beach in March of this year, attendance fully returned to its pre-pandemic numbers.

Meanwhile, when NAIOP returned to Jersey City this June 8th and 9th, attendance went up to 900 from pre-pandemic 850. Some 1,200 people signed up for the event, so NAIOP had to shut down registration,  Bisacquino says.

“It was the first time in the association’s history we couldn’t accept everybody we had because there was no more room in the hotel,” Bisacquino notes. “As far as I am concerned, last week certainly demonstrated that we’re back 100 percent.”

“We’re heading into the fall and if this fall is anything like last fall, we will end up with some kind of variant. Is it enough to make people not want to travel? I doubt it. My gut tells me this fall we will run our meetings as successfully as ever.”

NAIOP, which is not requiring proof of vaccination for attendance, will hold its annual conference in Chicago in October, and registrations and sponsorships are trending strong, Bisacquino says.

“We are commercial real estate guys and women,” he notes. “It’s a very face-to-face business. There is as much business happening in the hallway and at dinner as there is in the room where the presentation is being made.”

According to Chuck Harry, COO of NIC, virtual meetings just don’t cut it in an industry in which conferences have a heavy emphasis on business development and networking. NIC didn’t return to in- person events until it relocated its annual fall conference from Chicago to Houston last November because COVID-19 restrictions would have limited attendance in the Windy City. The event attracted 2,400 in-person attendees, about 72 percent of pre-pandemic levels compared to 3,300 attendees in the fall 2019.

By NIC’s spring meeting in Dallas this March, attendance reached 90 percent of that recorded in March 2020, with 1,700 attendees compared to the previous 1,900, according to Harry.

“Many of these relationships are operators seeking capital for their business and the better ability to get to know someone and understand them is in person versus trying to conduct that remotely,” he notes.

The conference in Dallas this March had the same set-up as the one in Houston, with a two-shot vaccine requirement verified through a third party, grab-and-go lunches and reduced conference room occupancy to space people out in a ballroom, Harry notes.

For the organization’s fall 2022 event in Washington, D.C., NIC has updated its requirements to either proof of full vaccination or proof of a negative COVID-19 test 48 hours in advance of the event.

“Seniors housing is serving the most vulnerable population among us and we want to make sure we have those protocols in place, especially for operators. Not everyone was happy with the vaccination requirements and didn’t attend,” Harry notes.

For the moment, however, NIC is still not budgeting for a return to pre-pandemic levels of attendance at the D.C. meeting over concerns another virus variant will arise.

“There’s always an opportunity should your numbers be significantly higher to go back to the hotel and adjust accordingly, but we can only make those adjustments on the margin,” Harry notes. “We’re looking at 85 percent of those 2019 figures, which is on par with what we have seen across the industry. Many are using that reduction of 15 percent off prior attendance numbers.”

No decision has been made on what NIC’s COVID-19 event restrictions might be in 2023. According to Harry, because no one expects the virus to go away, event planning has been more about flexibility and learning to navigate the situation in a safe manner.

“This is the first quarter we have seen a return to normal conference season,” says Matt Gardner, head of life sciences for the Americas with commercial real estate services firm CBRE, who attended the BIO (Biotechnology Innovation Organization) International Convention in San Diego this week, where proof of vaccination and a negative COVID-19 test were required. “I would definitely say it’s not completely back (in attendance), but it’s on the upswing. It’s great to see everybody in person again. There was a significant feeling of relief and hope of getting back to normal. I have met with a lot of old friends, and people are overjoyed to be back in the room together.”

The same trend was evidenced by ULI reporting its second-largest spring meeting attendance on record in April in San Diego, with 4,400 people, according to Gwyneth Coté, president of ULI Americas. She expects a repeat during ULI’s fall meeting in October in Dallas. The organization also accommodated people with a digital package for live-streamed and on-demand programming. In-person attendance required proof of vaccination through the CLEAR Health Pass app.

It felt “more like a normal conference,” notes Aaron Jodka, director of research, U.S. capital markets, Colliers, who attended the spring ULI meeting and will attend the fall meeting in Dallas. “There was a lot of excitement of people seeing one another and exchanging business cards and new connections. There was an energy there that was fun to be a part of. You can tell people were psyched to be back. It’s starting to feel what the world was like before COVID from a conference standpoint.”