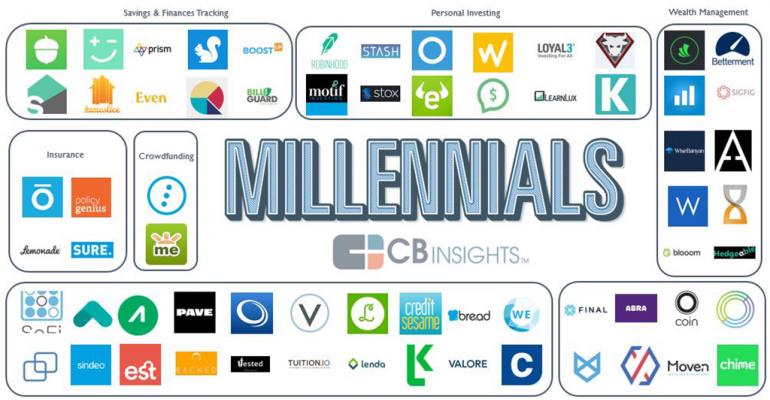 The World of FinTech Startups for Millennials

The millennial generation is the biggest in U.S. history, with 92 million individuals, according to the U.S. Census Bureau. This generation has less money to spend and higher debt levels than previous generations, according to Goldman Sachs. “Millennials are also investing, lending, and sharing money much differently than their parents, and they are assisted by a growing set of tech-driven tools to do so,” writes CB Insights in a recent blog post. New York-based CB Insights recently updated its list of the 63 FinTech startups targeting millennials. CB Insights added two-dozen new companies to the list and removed a few like Square and Venmo that went to IPO or had previously exited. The list includes robo-advisors like Wealthfront and SigFig, personal investing sites like Motif and Robinhood, and savings and finance trackers like Acorns and Hello Digit.

The primary emotions driving investors are fear and greed. But with the gloomy start to the year, fear is winning out, according to Eaton Vance's Advisor Top-of-Mind Index Survey. Eighty percent of advisors say fear is currently the top motivator for their clients, up from just over half who said the same a year ago. It’s not just clients who are getting cold feet. Almost half (44 percent) of the over 1,000 financial advisors surveyed believed the likelihood that the U.S. may be in a recession by the end of the year was moderate to high.

CBS News’ Jill Schlesinger hosted a joint LinkedIn and Capgemini webinar with industry leaders discussing whether the digitization of wealth management is a disruption or evolution. The panel consisted of Bill Sullivan, head of global financial services market intelligence from Capgemini; Jon Stein, founder and CEO of Betterment; Rachel Perkel, head of marketing wealth management brokerage at Wells Fargo; Hardeep Walia, CEO of Motif Investing; and Hart Lambur, CEO of OpenFolio. The webinar covered how firms can survive, thrive, adapt and differentiate in the age of automated advice. You can listen to the full webinar here, or read a summary of the key points in a blog post written by Sullivan.

No Romance Without Finance

With everyone's favorite Hallmark-created holiday on the horizon, new studies reveal just what role finances play in Americans' relationships. About 40 percent of 2,000 polled by NerdWallet and Harris Poll said a person's financial situation is more important than looks, according to MainStreet.com. Nearly half said they wouldn't date someone with bad credit. Meanwhile, MassMutual study from last year found that 47 percent of single people would rather be put in a financial bind than experience a romantic breakup. That number increases to 61 percent for millennials and 68 percent for those living with a partner or married. “It’s all something to ponder before your romantic night out, whether you’re diving into a first date or enjoying Valentine’s Day with your longtime significant other,” NerdWallet analyst Courtney Miller said. “But it might be best to talk about the kind of things that money can’t buy and to save the credit score discussion for another time.”