The investment industry could take a page from supermarkets and fast food chains when it comes to their customer experience. Supermarkets and fast food chains were rated the top two industries for customer experience, earning an average 74 percent and 71 percent rating, respectively, in the 2016 Temkin Experience Ratings. Meanwhile, customers rated the investment industry experience “poor,” giving it an average 58 percent rating, 10th out of 20 industries. Customer experience research and consulting firm Temkin Group generates these ratings by asking 10,000 U.S. consumers to evaluate their recent experiences with a company based on its success, effort and emotion—how the customer feels about the interaction. Temkin then averages the three scores to produce a company’s rating. While the investment industry overall was rated “poor,” Edward Jones and Fidelity Investments tied for the top spot out of 13 investment firms on the list, earning a score of 64 percent, putting them in the “okay” category. Morgan Stanley followed the two firms, climbing from a low position in the industry in previous years and earning a 63 percent experience rating. 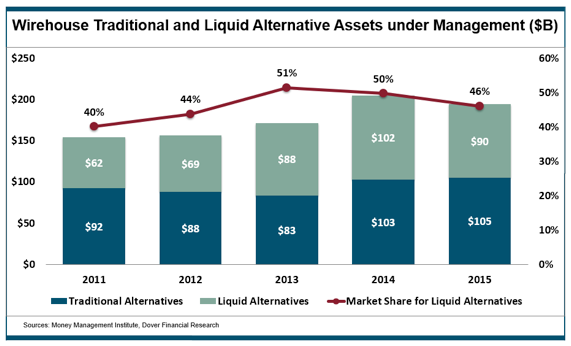 According to a new study by the Money Management Institute, wirehouse alternative investment assets fell 4 percent in 2015 ($205 billion to $195 billion) after years of steady growth. MMI attributed the entire decline to a $12 billion drop in liquid alternative mutual funds and ETFs. High fees and competition from smart beta and hedge fund strategies are slowing growth, while liquid alternatives have additional obstacles including a general lack of education among advisors and investors. The question is now is whether the 2015 results are simply a pause in growth, or if it represents a major turning point in the investor’s appetite for alternative investments.

Websites for financial advisors are notoriously bad. The reason? Most advisors only have sites because their competitors do, and most don't have the time or labor power to make them productive enough to convert traffic into prospects. In fact, Jack Waymire, the founder of PaladinDigitalMarketing.com, writes on Seeking Alpha that 83 percent of those surveyed in 2015 said their websites did not produce new prospects for the firm. To help, he provided five quick suggestions to get advisors over the hump: intuitive navigation, the right content (easy-to-understand language and transparency), identifying the team, free offers (like eBooks, white papers and newsletters) and few distractions (save the retirement calculators for the actual prospects).