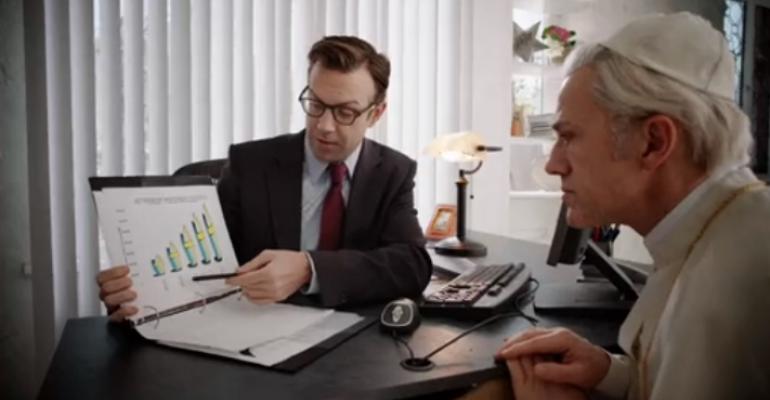 Via SNL: What If the Pope Went to a Retirement Advisor

This week the popular comedy sketch show “Saturday Night Live” riffed on Pope Benedict XVI’s resignation from the Vatican, with a commercial for “Papal Securities,” the financial advisor firm for popes. Funnily enough, Benedict is the only living pope to have abdicated his position, so it makes the concept of retirement from the Vatican a new one—and of course, a hilarious one.

“What will you do when you retire? What will you do after you’re pope? You’re spiritual future might be secure, but what about your financial future?” narrator Sudeikis asks.

Later on, Sudeikis is shown presenting the pope his financial plan, as well as looking over his assets—a gold chalice. “We’ll help you protect and grow the assets you already have.”

Benedict provides the only testimonial for “Papal Securities,” as he’s their only client to date:

“Papal Securities made sure my future was bright,” Waltz says.

Many people argue that SNL has lost its mojo in the last couple years, but I’m still a fan. I think SNL always does a great job of taking headline news and putting a different spin on it. In this case, everyone was shocked at the pope’s abdication and analyzing his reasons behind it. But no one else focused on the bigger question—what his life will look like after the Vatican.