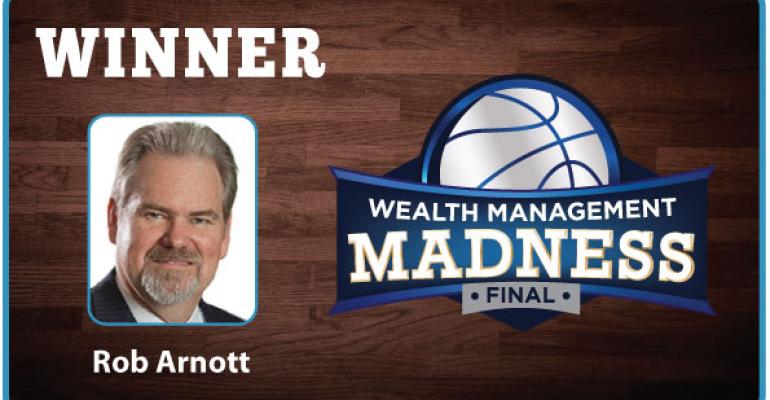 After four weeks and more than 40,000 votes, founder and chairman of Research Affiliates Rob Arnott is the 2015 champion of Wealth Management Madness.

Arnott won a landslide victory against Federal Reserve Board chair Janet Yellen, who lost in the championship round for the second year in a row.

Arnott founded Research Affiliates in 2002 around the idea of fundamental indexing strategies, but it wasn’t until recently that the idea, now called “smart beta,” really caught on. It was one of the hottest investment trends of the year, pulling in $55 billion in 2014, according to Bloomberg. As of Dec. 31, $170 billion in assets were managed around the world using investment strategies developed by Research Affiliates.

In an article for WealthManagement.com, Joshua Brown, a New York City-based financial advisor and CEO of Ritholtz Wealth Management, called Arnott an iconoclast figure in the investment industry and a provocative speaker.

“His thesis – that young people are putting themselves doubly at risk of a bad economy by being both susceptible to job loss and loaded up with stock market risk – turns the convention of how to allocate assets on its head,” Brown wrote. "The advisors in attendance are suitably shocked by the idea that they’re doing everything precisely backwards. But they’re also forced to nod at the logic it’s based on.”

It wasn’t an easy road to the championship for Arnott. He barely got by Bill Gross in the first round, winning just 51.7 percent of the votes. But in the Sweet Sixteen round, Arnott was a social-media slam-dunk over non-traded REIT guru Nicholas Schorsch and rode the momentum to a tight victory over Fidelity’s Mike Durbin.

It was over from there, as Arnott easily handled Wells Fargo brokerage chief Mary Mack in the Final Four before the crushing victory over Yellen.

Thanks to all of our readers who voted in the 2015 Wealth Management Madness over the past month. You can see all of the contenders in this gallery.