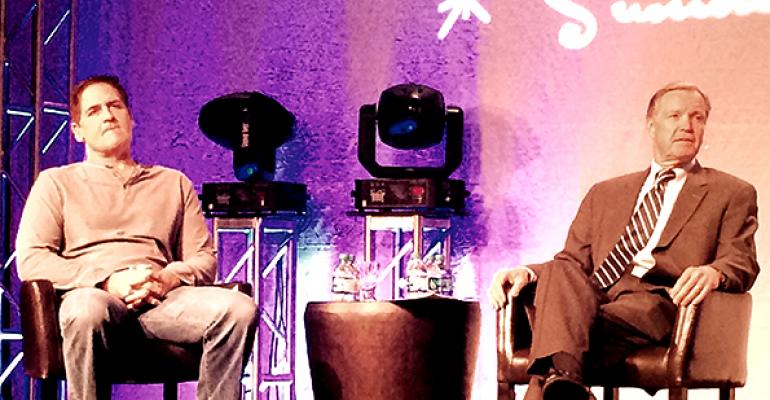 Mark Cuban vs. the SEC

The only way to reform what ails the Securities and Exchange Commission is to “burn it down and start again,” says Mark Cuban, billionaire entrepreneur, host of the television show "Shark Tank," and the owner of the Dallas Mavericks.

Cuban spoke on the same stage with former SEC commissioner Christopher Cox, who held the post from 2005 to 2009, at MarketCounsel’s annual conference in Las Vegas.

The event was billed as something of a debate between Cuban and the head of an agency that pursued him over a high-profile insider trading case stretching out for eight years. A jury found Cuban innocent of the charges in 2008, but the sting of the accusation was deep and Cuban has continued to criticize the agency ever since.

“One of the things I’ve been doing is buying up transcripts of SEC cases just to see if this is a pattern,” Cuban said. The agency is drunk with power, more interested in being proven right than pursuing justice. I stood on the court steps and said the SEC is a joke. I thought that then, and I think that now.”

Cuban held a 6.3 percent stake in a Canadian firm called Momma.com. When the CEO of the firm told him the company was issuing a private placement that would dilute Cuban’s shares, Cuban sold them for $7.9 million. The SEC called this insider trading, while Cuban’s lawyers argued in front of a jury that there was no verbal confidentiality agreement or no agreement not to sell the shares. They argued when he sold the shares, the private placement was public knowledge.

Not only that, Cuban said, the agency had records that cast doubt on their case, but under the civil judicial system the agency operates under, they don’t have to turn them over to the accused.

“They are incredibly arrogant,” Cuban said. “The goal of the SEC is to improve the facility of capital formation. You want to increase trust in the markets. Is there anyone who thinks the markets are safer than they were 10 years ago?”

Cuban argued the agency should set clear and unequivocal rules around insider trading to ensure the agency is only going after the bad guys, then up the penalties for those found guilty.

While Cox disagreed on the depth of the agency’s incompetence, he agreed the system of pursuing cases needs to change.

“The SEC is a culture of lawyers,” Cox said. Half of the agencies 4,200 employees are attorneys, and that shades their view of the world, he said. “The SEC report on enforcement has only two metrics. How many cases were filed, and how big the monetary penalties were that were imposed. There are no questions on appropriateness."

One particular concern is the agency’s increased use of administrative proceedings to adjudicate cases. The administrative law judges are employed by the SEC, which, Cox said, does little for investor faith in the proceedings. When it comes time to appeal, you appeal to the commission, which already voted to bring the case in the first place.

“The appearance is awful,” Cox said.

“But Mary Schapiro (the former chair of the commission) doesn’t give a [email protected]#t,” Cuban said.

Cox said it was a concern that half the agency’s 4,200 employees were devoted to enforcement, while the Division of Economic and Risk Analysis, the team meant to spot vulnerabilities in the market (and which Cox called “the marquee answer to the financial crisis,”) has just over 100 people on staff.

Cuban said he was particularly concerned that after 2009, the commission changed its procedures to give the head of the enforcement division (currently Andrew Ceresney) sole discretion to open cases without the approval of the politically appointed commissioners. “Andrew Ceresney is the frickin emperor of the SEC,” Cuban said.

“Doesn’t that scare the [email protected]#t out of everybody?”

The lack of coordination and resources allotted to departments outside of enforcement poses even bigger problems when it comes to cybersecurity and cross-border fraud. “We do have people who currently work at the SEC who can be brilliant resources, but there just aren’t enough of them. They don’t have the reach we need,” Cox said.

Cuban added that a cyber attack on financial market is a big threat. “I’m more worried about bytes than bullets. Bytes can bring us all down,” he said.

“Cross-border fraud is where it’s at these days, Cox added. ‘People deliberately set up their scams so no regulator will take an interest. If I set up a boiler room in one country and a repository in another country. … If I can four or five countries involved, no country will have enough skin in the game to make it their business.”

“There’s a process you have to go through with these other governments and it takes people to do that,” Cox said, adding that the SEC made over 900 requests for foreign assistance last year, while there was over 600 cases where other countries asked the agency for similar help.

‘We’re just not at scale to deal with threats of the future that are taking place in a cross-border fashion,” the former SEC chair said.

For his part, Cuban said that he hedges 80 percent of his portfolio for a cost of 3 to 4 percent of his assets, simply because “I don’t trust the SEC” to keep the markets safe.