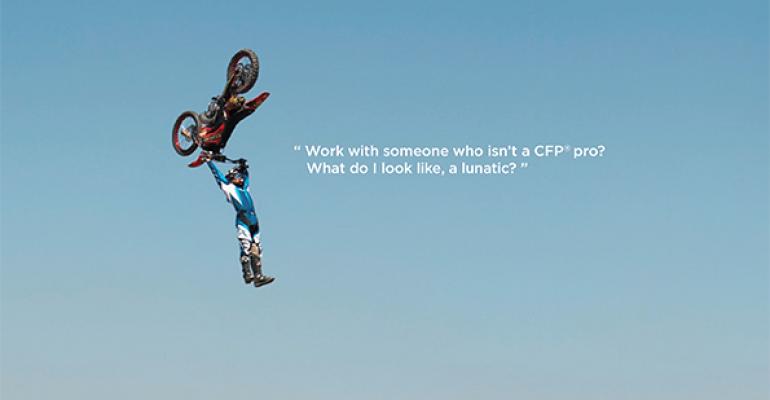 I’d Have to Be Crazy

Clients would have to be crazy not to work with a CFP professional, right? Even the most extreme daredevils wouldn’t trust a non-CFP. At least that’s the message of a new advertising campaign by the CFP Board. The organization’s newest online ad shows a shark tank swimmer, asking, “Work with someone who isn’t a CFP pro? I’d have to be crazy.” It follows with, “Don’t leave your finances to just anyone. Work with the highest standard. A CFP Professional.” The group’s print ad has a similar message but with a motocross driver. The CFP’s Public Awareness Campaign led to a 6 percentage point increase in unaided awareness among the mass affluent last year, the group says. But the new ads are bound to irk advisors who don’t hold a CFP and who don’t consider their clients “crazy.”

The Wall Street Journal reports the Obama administration is expected to endorse the Department of Labor’s advisor fiduciary proposal as early as next week, and the industry is getting ready for a fight. The Financial Services Roundtable released a memo Wednesday from law firm Debevoise & Plimpton contending that new rules in the United Kingdom that banned commissioned-based sales of investment products increased the costs to consumers. That country's financial regulator recently released a report on the effect of the rule, making the argument that changing the payment structure allowed investors to be able to better understand and compare the "true cost" of advice.

The “gut-feel” of even the savviest stock pickers is overrated, says Ben Carlson on his blog A Wealth of Common Sense, paraphrasing Ray Dalio. Dalio told hedge funder Bill Ackman at an investment conference earlier this week that on the rare occasions he "disagreed" with the stock picks generated by his quant-based investment model, he was wrong 66 percent of the time. Better to follow a rules-based model, and better yet make it automated; Carlson points to a study related in the book Quantitative Value that showed, over a three-year-period, automatically implementing Joel Greenblatt’s investment model outperformed human beings buying stocks using to the exact same model; the humans, even following the rules-based approach, couldn’t help exercising some discretion, which led to bad decisions and subpar returns.

As sitting Chair of the Federal Reserve System, Janet Yellen is one of the most influential economic policy makers in the world. But who is Yellen meeting on a day-to-day basis and for how long? This week, the Wall Street Journal published her complete calendar since she took office one year ago, obtained under the Freedom of Information Act. The timeline breaks down more than 950 meetings Yellen had scheduled from Feb. 2014 to Dec. 2014, including encounters with bank presidents, foreign officials, White House officials, media, lawmakers and Federal Reserve staff.