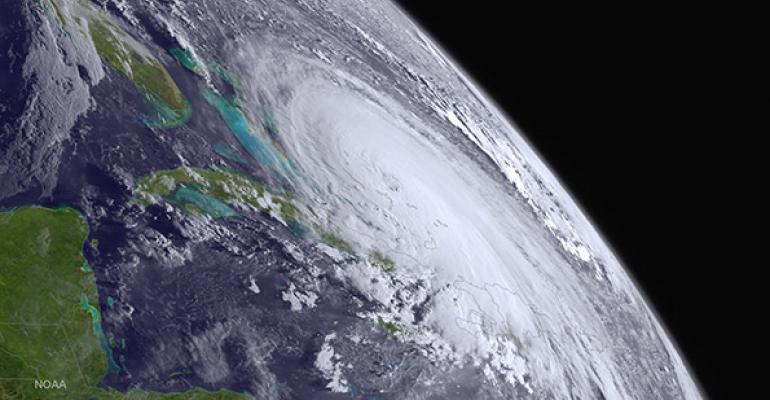 As Hurricane Joaquin Moves, So Moves the Market

The first U.S. landfalling hurricane in 15 months could occur this weekend, as Hurricane Joaquin gains strength and inches toward the east coast. Some stocks are surging ahead of the storm, with investors betting on companies related to storm preparation and cleanup. According to CNN Money, examples include Generac, a company that makes portable generators and power washers for homes and businesses, and Owens Corning, which makes roofing materials. According to the report, Generac stock has a history of leaping around the time of big storms, including a jump after Superstorm Sandy in 2012. With a market cap of just $2 billion, the company's stock is prone to price swings.

It's no surprise that over the past year, commodity prices have fallen sharply and now sit at levels last seen in the 1990s; the reason is a mix of trends, but China's economic slowdown is mainly to blame, writes Barry Ritholtz on Bloomberg View. Ritholtz looked at Bloomberg's Commodity Index and found that from 2001 to 2007, the dollar lost 41 percent of its value, China began a huge expansion and commodities skyrocketed. Now there is no inflation in sight, the Fed is more concerned about deflation and a strong dollar are hitting just as China's economic woes seem to be worsening and, viola, commodities have returned to the era of brick-sized cellphones, grunge music and flannel shirts. China consumes 54 percent of the world's aluminum, 48 percent of its copper, 50 percent of nickely, 45 percent of steel and 60 percent of concrete, Ritholtz writes.

If your firm is the victim of a cyber attack, don’t expect any sympathy from regulators. Instead, it’s likely the firm will be facing an enforcement action and fines, much like the $75,000 sanction recently levied against St. Louis-based R.T. Jones Capital Equities Management. And that’s a problem, says Sutherland partner Brian Rubin in a recent Law360.com opinion piece. In this case, the SEC charged the firm with failing to implement certain cybersecurity policies, even though the SEC does not mandate that so-called “best practices” be followed. The regulator has never issued specific rules for firms to implement the procedures. “It appears that the SEC may find that a firm’s procedures were unreasonable based on the simple fact that a breach occurred,” Rubin writes. If this continues, firms may need to consider building a plan to defend themselves in litigation against the SEC along with their cyber protections.

Sotheby’s London auctioned off The Beatles’ original 1962 recording contract, signed by all four members of the bad and their manager, Brian Epstein, at its “Rock and Pop” Sale on Sept. 29, 2015. Interestingly, the contract also features the signatures of the parents of Paul McCartney and George Harrison because neither of the two were 21 at the time of the signing, so parental consent was required. The winning bid was $569,000, according to artnet. This isn't the first time the contract has been sold. It last came up for auction in 2008, at which time the winning bid was $430,000. Not a bad ROI.