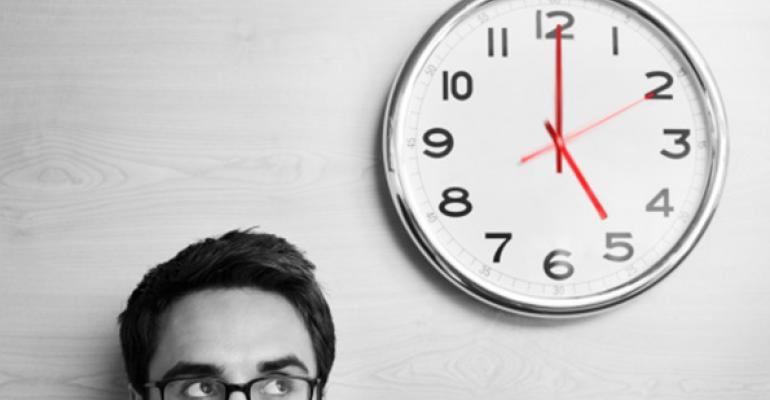 How Much Are You Working?

When was the last time you rolled into the office at 9 a.m. and were out the door at 5 p.m.? And you didn't check your email or look at your company-issue smartphone before or after work on what's supposed to be your own, personal time? Let's not get started with vacations, either, OK? Because of all that, the 19th century notion of the 40-hour work week is being called into question, with the likes of Carlos Slim and Google co-founder Larry Page leading the way. Just check out these numbers for proof: A Gallup survey of 1,200 American workers showed the number of hours worked was actually 46.7. Forty percent said they worked only 40 hours, and 18 percent said they worked more than 60.

Financial Advisors are People Too

How do you interact with your clients? Are you all business or are you a bit more "touchy feely?" (Michael Kay's words, not ours). Kay, the president and founder of Financial Life Focus, writes that only focusing on numbers and being "above the fray" is not what he considers financial life planning. Financial life planning is messy, and it includes getting involved in knowing about your clients and their lives. "Financial Life Planning ... is a visit into the real world, where clients are helped to better understand their financial decision-making. Where tears flow, death, divorce, sickness, unemployment and broken money mindsets reside. It requires a real willingness to get “down and dirty” and witness the bad stuff that resides in life, while offering a lifeline to clients without the advisor’s knowledge and experience," he writes.

Conference season is in full swing, with the FSI OneVoice conference taking place this week in San Antonio,  TD's national conference about to begin in San Diego and the Inside ETFs conference wrapping up in Hollywood, Fla. Inside ETFs, which featured a concert of Cuban music, pool and yacht parties, also included sessions with DoubleLine Capital's Jeffery Gundlach, the Winklevoss twins, Adam Nash of WealthFront and Ric Edelman, as well as a political discussion with James Carville and Karl Rove (who was also at FSI).

The Rich Get Richer

The following billionaires own holdings in Apple stock: Carl Icahn, David Einhorn, Leon Cooperman, David Tepper, George Soros, Julian Robertson, Ray Dalio and Richard Chilton, according to iBillionaires.com. Together the eight of them made $550 million on the tech company's blockbuster earnings. Since the end of the third quarter to Wednesday, their positions have grown by $1.1 billion.