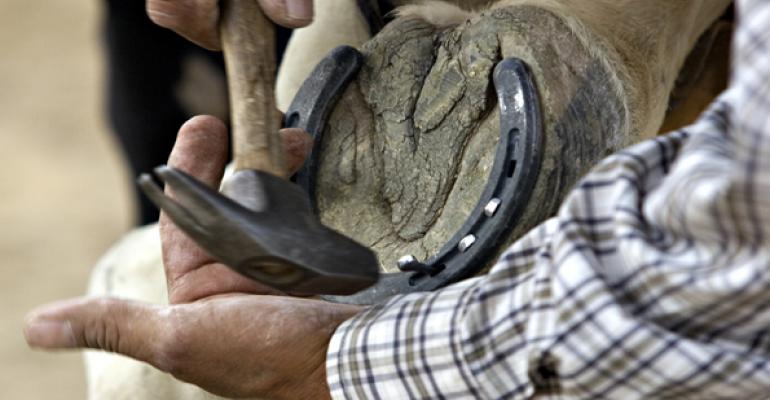 Gub'ment Waste? Nah. "City of Detroit Employs a Horseshoer But Has No Horses"

via TheBlaze.com - Storiesby Jason Howerton on 8/20/12

The Detroit Water and Sewerage Department (DWSD) pays a “horseshoer” $29,245 in salary and roughly $27,000 in benefits. There’s only one problem — Detroit has no horses for the horseshoer to shoe.

Some critics argue that the department has been turned into some sort of a government jobs program. Meanwhile, the local union president says it is “not possible” to eliminate positions, the Michigan Capitol Confidential reports.

The horseshoer’s job description, which was last updated in 1967 (Lyndon B. Johnson was president), is “to shoe horses and to do general blacksmith work… and to preform related work as required,” according to the department’s website.

With a large amount of debt, DWSD has struggled with rising water prices and inefficient services. They use roughly twice the number of employees per gallon as comparable cities like Chicago.

A recent independent reportabout the DWSD recommends that the city trim more than 80 percent of the department’s workforce. The consultant who wrote the report found 257 job descriptions, including a horseshoer. Capitol Confidentialsent a Freedom of Information Act request to the department for the salary, benefits and job description of the horseshoer position.

In response to the report, John Riehl, president of the American Federation of State, County and Municipal Employees Local 207, which represents many of the DWSD employees, told the Detroit Free Pressthat the department needs more workers.

“They don’t have enough people as it is right now,” Riehl said. “They are just dreaming to think they can operate that plant with less.”

But critics say this is just another example of city departments operating as a jobs program for union employees.

“They have said for years that they don’t have enough people,” said Roi Chinn, a former city administrator and 2013 mayoral candidate for Detroit. “As the bureaucracy thickens and union power grows, there is always a built in reflex … to want more.

“Whenever you think you’ve heard the bad about the city of Detroit, it gets worse.”

Chinn said if he was mayor he would sell the water department.

Daniel Edwards, a construction contracts manager with the DWSD, said the so-called horseshoer was transferred from the Detroit Police Department five years ago. And even though the police department does currently have horses, the DWSD employee doesn’t work with the animals. So the question is: what exactly does the horseshoer do?

“DWSD has a blacksmith shop in our Central Services Facility,” Edwards explained, attempting to justify the position. The shop “also … repairs equipment and works with various metals and welding for the department when needed.”

“For unions and the whole idea of collective bargaining, this is the kind of report that just makes any sort of future very, very hard to negotiate,” he wrote. “It suggests that collective bargaining turns government into a provider of jobs instead of public services.”