/sites/all/themes/penton_subtheme_wealthmanagement/images/logos/footer.png
Recent
Recent
10 Must Reads for the CRE Industry Today (Jun. 16, 2021)
Jun 15, 2021
Advisors Considering a Move: Begin With the End in Mind
Jun 15, 2021
Blucora Expects TaxAct/Avantax Synergies to Bring $2B in New Assets
Jun 15, 2021
AmEx Goes Hybrid with Most Workers at Home Mondays and Fridays
Jun 15, 2021
Featured
Poll: 15 Classic Books on Investing and the Markets
Apr 03, 2020
Fifteen Must-Listen Business Podcasts for Advisors
Aug 14, 2020
25 U.S. Markets Adding the Most Multifamily Units This Year
Feb 03, 2021
The Top Colleges for Financial Planning
Oct 03, 2019
Indie Advisor
brought to you by 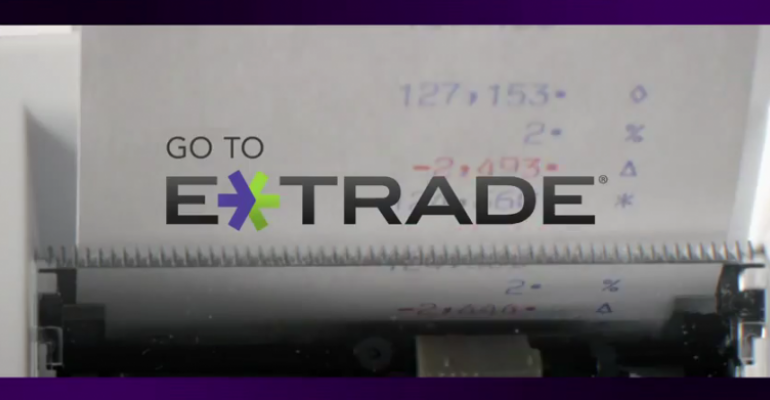 Is E*Trade a Threat? Think Again

For the last couple years, the financial advisor industry has been worried sick about whether low-cost, direct investment sites are stealing their business. The latest threat: E*Trade has been blasting financial advisors in commercials for their high fees (see below). But, in fact, E*Trade’s platform is not as good for the end investor as the company makes it out to be, says one financial advisor. Instead, the investing site itself has high fees and uses active management, not passive vehicles, he contends.

In a blog post on the Huffington Post, Dan Solin, wealth advisor at Buckingham Asset Management and author of 7 Steps to Save Your Financial Life Now, said the commercials are misleading. One commercial claims that the typical financial advisor will charge a 2 percent fee, when, in fact, 1 percent is more typical, Solin said. (I know many advisors are now raising their fees above that, but I’ve also heard that 1 percent is the norm.)

To find out whether E*Trade was really cheaper, as they claim, Solin conducted a little experiment:

I contacted E*TRADE and, using my real name, asked its representative to send me a schedule of fees and proposed investments for a portfolio of $1 million, with an asset allocation of 60 percent fixed income and 40 percent stocks.

Here’s what he found:

For clients who elect its "Managed Investment Portfolio," E*TRADE charges a maximum annual net advisory fee of 0.90 percent on assets up to an account value of $100,000. Its fees decline on a sliding scale as assets increase in value. For assets over $1 million, its fee is 0.65 percent.

Most of the funds recommended by the E*TRADE representative were actively managed funds where the fund manager attempts to beat a designated benchmark. The average expense ratio of those funds was 0.72 percent. A comparable passively managed portfolio would have lower expense ratios, ranging from 0.20 percent to 0.47 percent. Higher expense ratios reduce returns.

In addition, the mutual funds in the portfolio also paid 12b-1 fees, although included in the expense ratios, and three of the funds recommended charged front-end loads. Passively-managed funds, however, don’t pay 12b-1 fees or charge front-end loads. An even bigger problem with the active funds? The likelihood that they’ll outperform passive funds is a small one. And year-after-year, studies back that up.

My colleague Larry Swedroe wrote a blog post addressing this issue. He found that, based on the assumptions set forth in his blog, the probability of a portfolio of 10 equally-weighted actively managed funds, rebalanced annually, successfully generating “alpha,” was a minuscule 0.055 percent over a 10-year period.

While these commercials are definitely worrisome, the fact of the matter is, E*Trade may be full of hot air. What do you think?