Craft Breweries a Bright Spot in the Economy

The government’s most recent GDP figures provide a gloomy outlook for the year; GDP grew a measly 1 percent in the first half of the year, according to CNBC. But a new report shows craft beer to be one bright spot in the market—and perhaps an opportunity for those clients willing to consider esoteric, alternative investments. As of the end of June, there were a record high number of craft breweries in the U.S. at 4,656, an increase of 917 from last year, according to the mid-year outlook by the Brewers Association, a not-for-profit trade association for small and independent American brewers. Another 2,200 breweries are in the works, the association said. Craft beer production volume is up 8 percent in the first half of 2016. “Even in a more competitive market, for the vast majority of small and independent brewers, opportunities still exist,” said Bart Watson, chief economist, Brewers Association. And unlike large beer manufacturers, small craft breweries saw business soar during the financial crisis. But as with any esoteric investment, advisors and clients need to do their due diligence before jumping in. 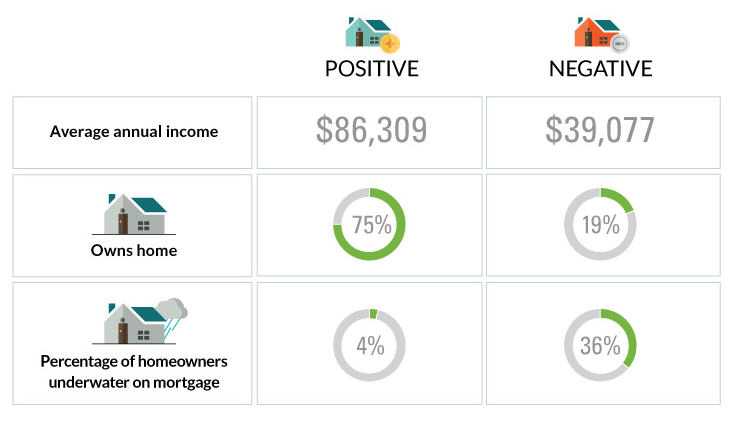 A new report by the New York Federal Reserve shows that 14 percent of the U.S. population has "negative" wealth, meaning their debt is higher than their assets, Visual Capitalist is reporting. According to the study, negative wealth households bring in about $39,000 in annual income, and only 19 percent of those families own a home. More than one-third of those with mortgages are under water. In contrast, positive wealth households bring in more than $86,309 in annual income, and 75 percent own a home. Only 4 percent have underwater mortgages. While education is fairly similar between positive and negative wealth families, other demographic profiles are more stark. Negative wealth households are younger (43 vs. 51), female (69 percent vs. 45 percent), single (57 percent vs. 33 percent) and single parents (20 percent vs. 7 percent).

TD Ameritrade is shaking up its leadership team. The firm announced this week that Marv Adams, TD’s executive vice president and chief operating officer, would resign on Dec. 1. Rather than replace Adams, TD instead plans to “steamline its organizational structure to better align with future strategic goals and objectives” by eliminating the COO position. Adams will remain with the company through November, serving as an advisor to TD’s new president and CEO, Tim Hockey.