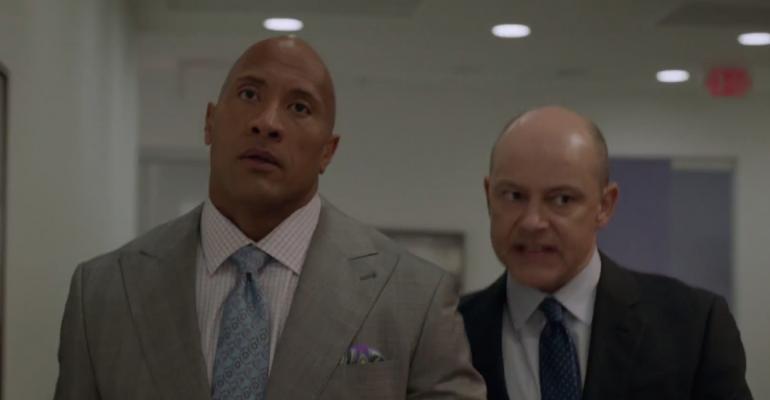 The latest installment of Ballers tests not only the players, but their support system. And as the old saying goes, if you can’t handle the heat, get out of the kitchen. (Warning, spoilers ahead.)

In the penultimate episode of HBO’s season one of Ballers, both Spencer Strassmore (Dwayne “The Rock” Johnson) and his Anderson Financial colleague can’t escape their past sins. For Strassmore, it’s the brutal, career-ending hit he doled out to Dan Balsamo (The Walking Dead’s Michael Cudlitz), owner of the local auto repair shop. But Strassmore eventually does mend fences with Balsamo.

Joe Krutel (Rob Corddry) isn’t as lucky. Krutel spends most of the episode sulking and whining that Mr. Anderson will not let go of the infamous yacht party and continues to pick on him. “Mr. Anderson, Spencer and I are a team. If you like his work, you like mine,” Krutel tells his boss in an attempt to stand up for himself.

“But he’s Spencer Strassmore, and you’re just Joe Krutel…gold medalist in being a pain in my butt,” Anderson says.

Real-life advisors say Anderson’s behavior is somewhat justified. Experience brings higher expectations, says Jordan Waxman, managing director and partner of HSW Advisors at HighTower. “Although the rules apply equally, seasoned advisors will be held to a higher standard than junior ones.” In this case, Krutel is definitely the more experienced, and qualified, advisor.

Singling out Krutel and holding him to a higher standard is fair, says Tom Reynolds, advisor co-founder of CRA Financial. “Joe should know better,” he says.

“Joe is the primary advisor and does not have the marketability of Spencer,” adds Erik Averill, a partner with Athlete Wealth Management Group. “While it may seem unfair, it is what we see in everyday life. Who you are has a large impact of what society allows you to say or do.”

Anderson’s continued punishment pushed Krutel into solidifying his plans to leave Anderson and start his own practice. But Strassmore may not be joining him. Krutel attempts to sound out to Strassmore to see if he will will tag along if he leaves the firm, hinting that he found office space in Coral Gables. Strassmore’s response is less than enthusiastic. Could this be the end of the dynamic duo?

“I think the episode is about evolving; or moving on and moving forward,” Waxman says, noting that Joe moves on from Anderson, who is a bully; and Spencer gets closure from his guilty memories... “It all begs the bigger question for professional athletes—how do they successfully move on?”