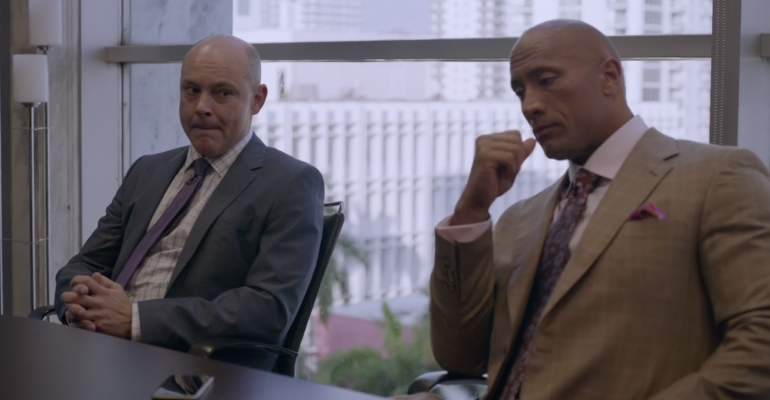 It might be time for Dwayne “The Rock” Johnson’s Spencer Strassmore to look for a new job. (Warning, spoilers ahead.)

On this week’s episode of HBO’s Ballers, the fallout from the infamous yacht party finally hits, with Mr. Anderson, head of Anderson Financial, calling both Strassmore and Joe Krutel (Rob Corddry) to the carpet for their actions.

But real financial advisors think that both Krutel and Strassmore got off too easy. “Probably was too nice…should have fired both on the spot," says Tom Reynolds, advisor co-founder of CRA Financial.

Erik Averill, an advisor with Athlete Wealth Management Group, agreed, saying he definitely would’ve fired Krutel immediately. “Personally, their tactics to obtain clients carry massive risk to the overall firm and make it difficult for the relationships to be profitable.”

And Anderson’s concerns around the firm’s institutional clients are valid, Reynolds says. “They do not like to be in the paper; they like to fly below the radar. This would be troubling to know that their advisor is participating and promoting such poor behavior and illegal activities.”

The situation illustrates one of the conflicts which arise when mainstream financial advisory firms attempt to recruit professional athletes, says Noah Croom, legal counsel for Goodwin Sports Management. “Quite frankly, I believe for many firms, if those are the kinds of efforts it takes to recruit these clients, they may not be the type of clients you want.”

There is a rule of thumb in wealth management that you never want to do something which could end up in the headlines of the financial journals, says Jordan Waxman, managing director and partner of HSW Advisors at HighTower. The downside far outweighs the upside.

But the confrontation with Anderson spurs Krutel to start seriously considering opening his own practice. “We should bounce…start our own shop,” he tells Strassmore.

To that end, Krutel meets with Victor Cruz to see if the player would be willing to follow him to a new firm. Of course, because it’s a TV show, they meet at a tattoo shop.

“There is a sense of desperation in how [Krutel] is wooing clients. I’m curious as to his current clientele…he doesn’t seem to be doing much for them,” says Palash Islam, owner of California-based Synergy Financial Group.

But Waxman notes that starting a new firm is not all fun and games. "It takes a huge amount of capital (human and financial) to start an independent firm, and one bad act can ruin the company," he says. Can Krutel pull it off?