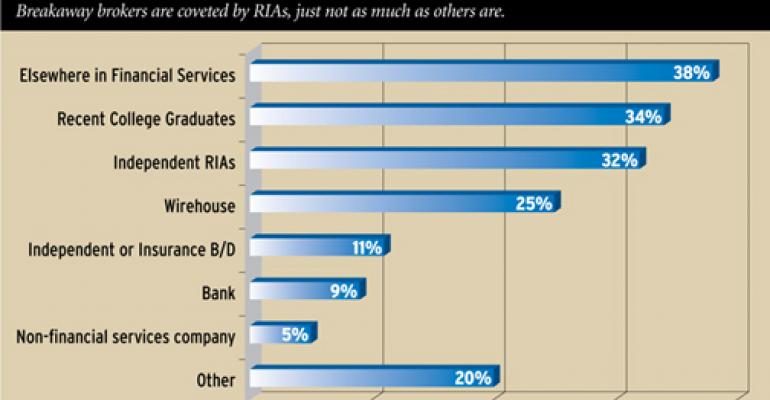 Turns out breakaway brokers are not as coveted in the independent space as you might think.

Turns out breakaway brokers are not as coveted in the independent space as you might think. According to a recent FA Insight survey, the biggest source of new financial advisor hires for RIA firms is “elsewhere in financial services,” with 38 percent of firms saying that's where they'll look.

FA Insight, a consultancy, says that category could include accounting firms, trust companies or family offices. “Perhaps due to a combination of availability and experience, the most popular source of new hires is elsewhere in the financial services,” the study says.

The study, sponsored by TD Ameritrade, surveyed 200 RIAs, independent broker/dealer-affiliated firms and dually registered reps. The respondent firms have at least $75,000 in annual revenue and have been in business for at least 12 months.

Even with all the hype about breakaway wirehouse reps looking for a new home in the independent channel, existing independent firms are more interested in hiring college graduates or individuals from other RIAs.

“What this says is firms want somebody smart or knowledgeable about the industry, and they're willing to train them. They may be less attracted to someone who is more knowledgeable but that's grown up in a different system than their own,” says Dan Inveen, founder of FA Insight.