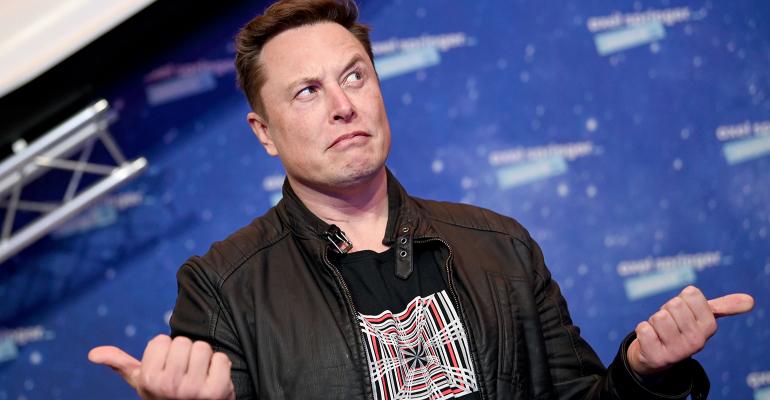 Elon Musk Was the Shoeshine Boy

Usually financial speculation and trading is done by professionals, and so by the time the trade idea has filtered out into the world so much that even the shoeshine boy is talking about it, that’s probably a sign of the top. For cryptos it's the opposite.

(Bloomberg) -- Who knows if it’s true or not, but there’s a quote frequently attributed to Joseph Kennedy that goes: “If shoeshine boys are giving stock tips, then it’s time to get out of the market.”

The intuition is pretty straightforward. Usually financial speculation and trading is done by professionals, and so by the time the trade idea has filtered out into the world so much that even the shoeshine boy is talking about it, that’s probably a sign of the top.

A couple of years ago, I wrote a piece for Businessweek about how, with certain modern bubbles and manias, the trajectory went exactly backwards. Instead of starting with elites and filtering down to the proverbial shoeshine boys, it was the shoeshine boys who got there first. The pros got there later.  Here’s what I wrote at the time about Bitcoin:

Related: Elon Musk Is Now Blowing Up the Wall Street Case for Bitcoin

It first sprang to life a decade ago while the world was collapsing. In the code that got Bitcoin started—known as the genesis block—its pseudonymous creator Satoshi Nakamoto inscribed: “The Times 03/Jan/2009 Chancellor on brink of second bailout for banks.” Since then, Bitcoin has taken a strange route toward respectability, from cypherpunks to online drug dealers to angry anti-Fed neo-goldbug types to Wall Street. When Wall Street finally arrived at the party, it was one of the last to show up. Bitcoin peaked the very week futures on it were launched last December. Of course, along the way, a few thousand other cryptocurrencies also showed up, hoping to cash in. The Bitcoin frenzy moved in the opposite direction from the housing bubble.

In The Big Short, the ultimate tell that housing was going to crash was the scene where a stripper was talking about her real estate speculation. There were stories about strippers accepting Bitcoin all the way back in 2012. When they make a movie about Bitcoin, the stripper will realize Bitcoin is peaking when a Wall Street client starts talking about launching a crypto hedge fund.

So now here you have Elon Musk, who’s currently the third-richest person in the world, becoming weirdly the face of crypto, first with his adoption of Bitcoin, then with his refocus on Doge and all the tweets and turnarounds over the last few weeks.

And so here you have the full story of Bitcoin, started by an anonymous cypherpunk, slowly adopted by sundry nerds, then online strippers, and then slowly people in finance. And then what finally marked the top (at least for now… I would never want to declare *the* top) is when literally the third-richest man in the entire world gets into it. The shoeshine boy trajectory in reverse.

To contact the author of this story:
Joe Weisenthal in New York at [email protected]