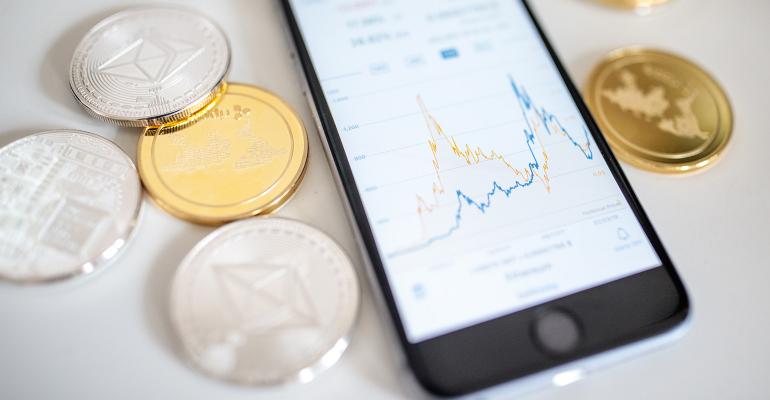 The risk taking that marked the beginning of the year in the stock market may not have gone away, but rather turned its attention for the time being to a more lucrative venue.

(Bloomberg) -- Here’s one way to conceptualize the wild and wacky retail trading that’s marked 2021: A game of hot potato.

That framework was laid out by Vanda Research’s Ben Onatibia and Giacomo Pierantoni in a note.

The Vanda analysts see it working like this: The retail stock trading mania, best exemplified by GameStop Corp., peaked in late January. On that same day, Bitcoin slumped to its lowest point since crossing $40,000 earlier in the month. Retail, looking for the next big leg up and agnostic to the asset class pivoted from stocks to cryptocurrencies. Those retail traders would ride Bitcoin for the next three months as it more than doubled from its late January low to a high of more than $64,000 in mid-April.

As Bitcoin’s momentum faded around the time of the Coinbase Global Inc. direct listing on April 14, day traders’ attention pivoted to altcoins such as Ethereum and Dogecoin.

“The short squeezes in GME and AMC were the prelude to the explosion of another Bitcoin bubble,” wrote Vanda’s Onatibia and Pierantoni. “Under the pretext of institutional support, retail investors started rotating out of speculative retail stocks and pouring their money into Bitcoin.”

If that sounds familiar to those that remember the last cryptocurrency bull cycle that peaked in late 2017, it’s because it’s eerily similar the Vanda analysts point out. Back then cryptocurrency speculators went from one wave to the next, running up prices across the digital asset ecosystem.

“In 2017, Bitcoin had made all the headlines and been the best performing crypto asset for months,” according to the note released Monday. “When the rally started to look tired in November, investors rotated to lesser known altcoins like Ripple and Ethereum, which quickly became household names too.”

What that all means is that the risk taking that marked the beginning of the year in the stock market may not have gone away, but rather turned its attention for the time being to a more lucrative venue. And if or when the current bull run in altcoins comes to an end, those retail darling stocks might be ripe for another run of their own.

“A correction in crypto would push retail investors back into equities, where some of their favorite stocks are now trading at a significant discount vis a vis the February highs,” the Vanda analysts wrote.