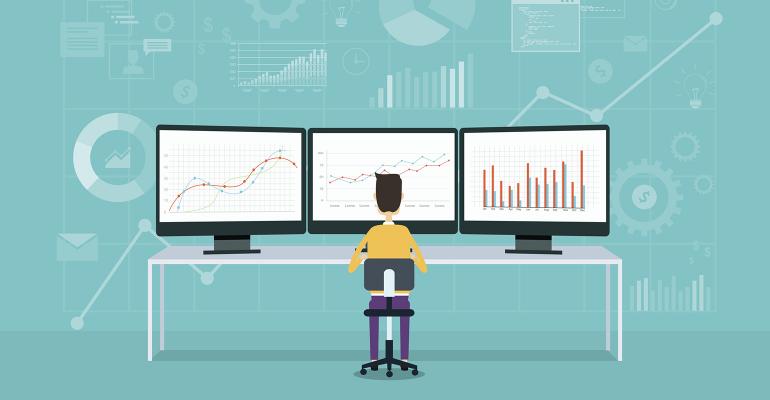 Darting in and out of stock options, dabbling in complicated exchange-traded funds, devouring trading how-to books by the dozen -- all have become tools in the self-directed portfolio playbook.

(Bloomberg) -- Forget buy-and hold. Stuck at home and dreaming of a killing, bored retail traders are branching out into all manner of Wall Street exotica.

Darting in and out of stock options, dabbling in complicated exchange-traded funds, devouring trading how-to books by the dozen -- all have become tools in the self-directed portfolio playbook. Locked down and socially distant with lots of time and (apparently) money to spare, they’re leveraging zero-percent brokerage fees in new and surprising ways.

“Obviously you’re exposing yourself, depending on how you’re doing it, to catastrophic loss,” said Brian Nick, chief investment strategist at Nuveen. “If you get a lot of investors in either individual securities, companies or investment strategies that they may not have experience with, it could lead to unhappy investors down the road.”

Whatever the advisability, individual investors have been a rising force in the $6 trillion stock rebound. Contrary to old-school theories that mom and pop bail at times of market crisis, they piled in this year, lured by free trading and, probably, boredom, with casinos closed and sports betting halted. Besides fretting about its prudence, analysts worry the dynamic is delaying the type of retail-investor washout that many consider necessary to end a serious bear market.

The fingerprints of tiny investors are all over the options market. Trades consisting of just one contract now account for 13% of total volume, according to Goldman Sachs Group Inc. analysts led by John Marshall. That supports a view that “individual investor active trading is playing an increased role in market volatility.” In some popular stocks, like Chipotle Mexican Grill Inc. and Alphabet Inc., small options trades account for nearly a third of total volume.

Many of the trades are quick ones. Chris Murphy, Susquehanna International Group’s co-head of derivatives strategy, calls the phenomenon “message board trading,” one-day round trips where an investor both opens and closes the position in the same session. Such activity is exploding, especially in stocks like Apple Inc., Stitch Fix Inc. and TripAdvisor Inc.

TD Ameritrade Holding Corp. has seen client engagement soar, with requests flooding in for new investing strategies. Visits to the brokerage’s “Education Center” hit an all-time high in April, up 280% from the year prior, with clients downloading explanatory videos and online courses. The most popular classes included stock fundamentals and options trading. Clients gravitated to content showing how to buy and sell stocks using mobile apps, and also on covered calls -- a type of options strategy.

“People are still trying to learn to do this better,” said JJ Kinahan, the chief market strategist at TD Ameritrade. “People are just saying, ‘OK, retail is going in and being crazy.’ Well, I think the fact is retail is trading more because they have more time. People actually have time to do so, and that’s why they are more interested.”

That’s been true for Ameer Umarov, a cab driver in Arizona with an interest in math and a passion for video games. Months ago, when he realized the coronavirus was growing into a global health crisis, he reactivated his Amazon.com account to make some purchases. Not for masks or hand sanitizer -- for books on stock trading. Two a week, at one point.

When equities started surging in late March, Umarov stayed away, scared by the volatility. He was ready to act by the first week of April. He bought shares of Boeing Co., a bad decision that set him back more than $4,000. But a stake in Halliburton Co. brought him $9,800, after he sold shares on the day of a 16% rally late last month. A few other purchases -- Goldman Sachs and Micron Technology Inc., among them -- yielded mixed results. All told, Umarov is down some $400 since he began.

“It’s a gamble, but a highly intellectual gamble,” he said by phone. “It’s about knowledge and risk, but especially for guys like me, it’s all about sheer luck.”

This month, he stopped buying books and instead signed up for a virtual trading boot-camp. He paid $4,100 for two days of 8 a.m. to 4 p.m. classes, where he learned about concepts like support, resistance, and trading on gaps. To Umarov, the course is a long-term investment, and he’s decided eventually he wants to make trading his full-time job.

Chris Camillo isn’t your typical retail trader. He starting investing when he was 13 years old. Now 45 in Dallas, he’s turned the original hobby into a full-time job, he says, and created quite the community -- aided by claims of mammoth gains in his TD Ameritrade portfolio. All the while, he was hosting live shows on YouTube, each episode drawing as many as 6,000 viewers, where he explains his method -- what he calls “social arb” trading.

On Tuesday he created a chatroom through the site Discord to develop a hub for conversation. It already has over 500 members -- many of them younger.

“And, hey, it took a pandemic, but it was already happening before this with Wall Street Bets and cryptocurrency,” Camillo said by phone. “Now they’re wanting to go one layer deeper. OK I did that, I did crypto, OK now I own Tesla, I get it. But there has to be more to investing than just Tesla.”

Short on money? Next month Charles Schwab Corp. will allow investors to buy fractions of shares through a mechanism called “slices.” Retail trading platforms Robinhood and Social Finance, popular with investors in their 20s, have launched similar products in the past two years. While many cheer the convenience, some fear it will awaken animal spirits among young investors that aren’t ready for it.

“It’s good to get people involved in investing earlier in an efficient way that meets their asset scale,” said Benn Eifert, chief investment officer of QVR Advisors. “From my perspective, the difference is, are you channeling them into the gameification of day trading, into over-confidence, into getting involved in things you don’t understand, or are you channeling that into long-term planning and asset allocation?”

I know several people actually doing this, but I’d add airlines, cruiselines and energy stocks to that list. Add free stock trading and fractional shares to the mix, recipe for madness.

The number of investors at Robinhood currently holding the U.S. Oil Fund, the biggest exchange-traded fund invested in oil, stands at 171,000, 20 times the number of users that held the fund in early March, according to website Robintrack, which uses Robinhood’s data to show trends in positioning but isn’t affiliated with it. The popularity of the fund only increased after negative oil prices captivated and confused traders.

This past week, FINRA -- a government-authorized non-profit that oversees broker-dealers -- issued a notice on oil-linked exchange-traded products, saying they provide exposure to the oil market through product structures that some investors may not understand. The non-profit called for the ETPs to have a “fair and accurate” communication with the public.

“There is a long, documented history of retail investors chasing a handful of story stocks and then getting burned,” said James Pillow, managing director at Moors & Cabot Inc. “We humans love a good narrative. I cannot imagine this time around ending any different.”