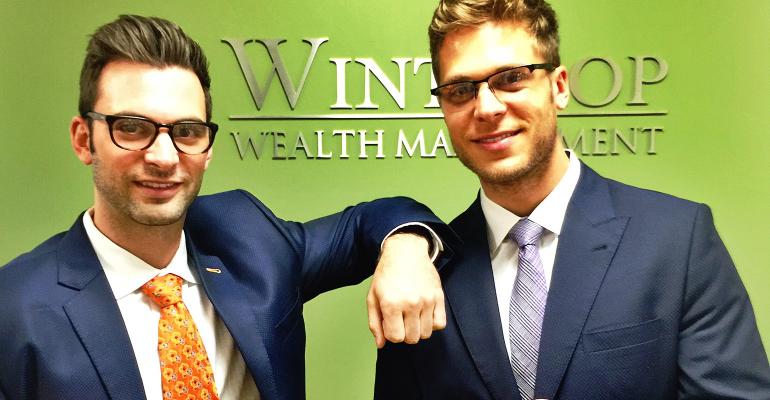 The move allows Winthrop Wealth Management, which still custodies with LPL, to get its new practice acquisition platform up and running.

Boston-based Winthrop Wealth Management, a wealth management firm with $1.3 billion in client assets, has left LPL Financial’s corporate registered investment advisory firm to create its own independent hybrid RIA and launch a practice acquisition platform. The firm will stick with LPL for custody and its small amount of brokerage business.

“It was really important for us to make sure that, hey, if something happened to LPL or if we were with a different custodian, if something happened there, can we pick up and plug in somewhere else without our clients having to have any type of negative impact? And the answer a year ago was, ‘No, we can’t,’” said Lucas Winthrop, chief operating officer.

The firm was founded over 30 years ago by brothers Earl and Mark Winthrop, who still work with clients. The firm is now led by Earl’s sons, Lucas, 27 and CEO Max Winthrop, 29. Lucas and Max wanted to go independent to provide continuity for their clients and their families and “bring the firm into the next generation,” Lucas said.

“In the last five years what you’ve seen happening is, some of these guys who’ve been operating under the sole proprietor/independent model for 35, 40 years are at a real crossroads,” he said. “They didn’t take the time to invest in their firm, so now they’re running into continuity issues. And they can’t keep up with the technologies, compliance in the most-regulated industry in the world. They’re throwing their hands up, and they’re trying to figure out what to do.”

They converted 1,400 accounts onto the new platform in two and half months.

The move also enabled Winthrop to launch Empower Advisor, a proprietary software built primarily to facilitate the firm’s future acquisitions. But the platform could have applications for other advisory firms.

“[Version 1] of Empower Advisor is for us to align other advisors’ and other RIAs’ data with ours prior to making acquisitions, to be able to do the right amount of due diligence and have a smooth transaction,” Lucas said.

The problem Winthrop sees with the traditional approach to acquisitions is that advisors are often focused on the numbers and valuations.

“But what they don’t look at is, what is the basis of those relationships that they’re buying? Why did that client first come to that advisor? What was the problem they were trying to solve? What was the need that they asked, and why did they end up working with each other?”

The key, the firm believes, is having structured data, or data that resides in a fixed field within a record or file. But in this industry, you’d be hard-pressed to find a book of business that has structured data.

“It’s been a very paper-heavy business,” Lucas said. “When you take a firm that’s 30 years old and has relationships that are 30 years old, and you try to take all that data and make sense of it, it’s extremely difficult.”

The Empower Advisor platform helps to take unstructured data and structure it for the purposes of better understanding client relationships.

To date, the firm hasn’t done any deals, but they plan to start acquiring other practices starting next year.

“We want to make sure that when we make acquisitions, the service levels and the attention to the current client base are not impacted at all. If anything, they should be better than they’ve ever been,” Lucas said.