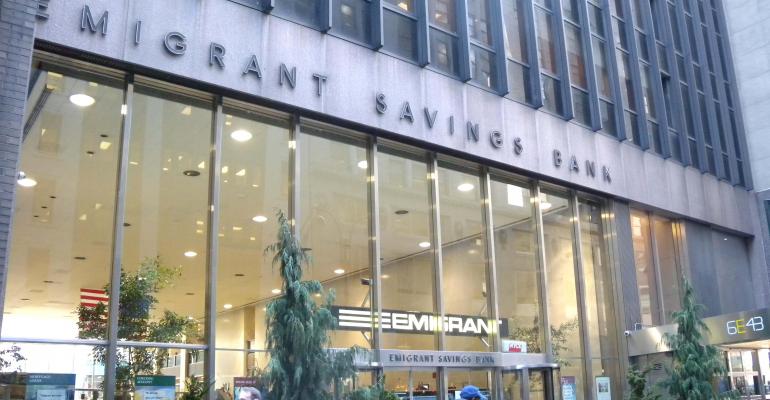 Emigrant Bank’s acquisition of Fiduciary Network could signal a new way for banks to play in the wealth management space, without some of the marital problems.

Banks have been buying up registered investment advisory firms for many years. They accounted for 9 percent of RIA acquisitions during the first three quarters of this year, according to Echelon Partners. But Emigrant Bank’s recent acquisition of Fiduciary Network is a different type of transaction: it’s an aggregator of RIA firms, not an RIA itself. Banks and RIAs have always had a love-hate relationship, but this deal could signal a new way for banks to play in the wealth management space.

“The aggregators have been turned into businesses already,” said Alois Pirker, research director for Aite Group’s wealth management practice. “They’ve spent a lot of effort creating an infrastructure that is much more robust and enterprise-like than most RIA infrastructures are. So that’s attractive if you really want to grow wealth assets.”

Pirker sees a big opportunity here for Emigrant Bank because succession financing is a significant problem in the RIA space.

“The acquisition logic and succession topic is not going away,” he said. “You’re going to have more M&A happening, and being a specialist provider of financing in the RIA space—if you make the acquisition yourself or you’re the lender in that context—there’s opportunity on either side of that.”

Pete Gougousis, managing director with Alvarez & Marsal’s transaction advisory group, says succession planning is a key area his firm looks at when considering a deal in the RIA space.

“Anytime an advisor or the founder is retiring and they haven’t appropriately transitioned their client base to other teams members, that’s a huge red flag to us,” he said. “If a company offers financing, it seems like that would be attractive. So it doesn’t surprise me that that is something buyers are looking at.”

Some say the combination of RIAs and banks hasn’t worked out in the past, especially when integration is involved.

“The strategic direction and intention of the acquisition is very important here,” Pirker said. “You can’t just take that lightly—the cultural integration. If you really want to do an integration strategy, it needs to be very carefully considered.”

Several RIAs that sold to banks have since bought their firms back. Sullivan Bruyette Speros & Blayney, for example, repurchased their RIA from Bank of Montreal a few years ago. In 2009, Boston Private sold its 76 percent stake in Palo-Alto, Calif.-based Sand Hill Advisors to the management team (with the help of Fiduciary Network).

In these situations, the synergies that both RIAs and banks expected going into the deals never really materialized, said Tim Welsh, founder, president and CEO of Nexus Strategy. “The bankers didn’t refer their customers to the wealth managers and vice versa.”

And some RIAs found the bank culture to be too different.

“The bank culture is much more bureaucratic and controlled, and there are no superstars, whereas in wealth management, those people are celebrated,” Welsh said. “It seems on paper it’s a great idea because you can cross-refer and have a solution and capture those wealth management revenues, but it just doesn’t work.”

Banks were once the largest buyers of RIAs, but they’ve been at the bottom of the charts in terms of their market share of M&As since 2012, according to Echelon Partners.

Matt Sonnen, founder of PFI Advisors, said banks tend to be slow getting in and out of the RIA M&A space. It has taken them 10 years to become confident in the space again. (Sonnen, former chief operating officer and chief compliance officer at Luminous, helped structure the deal to sell the RIA to First Republic Bank in 2012.)