/sites/all/themes/penton_subtheme_wealthmanagement/images/logos/footer.png
Recent
Recent
Why the Shift to a Longer-Term ‘Business Owner’ Mentality Is Driving Movement
May 27, 2022
NYC Luxury Theft Boss Planned Own ‘Department Store,’ City Says
May 26, 2022
Seven Must Reads for the CRE Industry Today (May 27, 2022)
May 26, 2022
What’s the State of the Capital Markets for Cannabis Real Estate?
May 26, 2022
Featured
The 10 Best and 10 Worst States in Which to Retire in 2021
Jul 15, 2021
Poll: 15 Classic Books on Investing and the Markets
Apr 03, 2020
Fifteen Must-Listen Business Podcasts for Advisors
Aug 14, 2020
Celebrity Estates: Jay Leno and Planning for Classic Car Collections
Feb 22, 2022
Broker Report Card
brought to you by 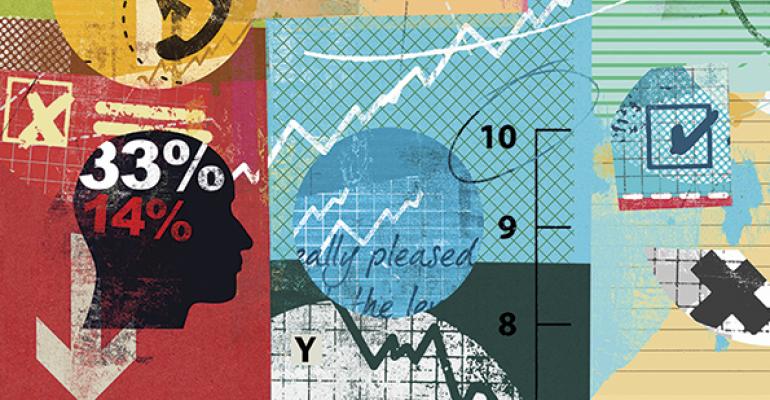 How This Survey Was Conducted: Between Sept. 19 and Nov. 6, REP. magazine emailed invitations to participate in an online survey to print and web subscribers and advisors in the Meridian-IQ database at the six largest national brokerage firms. A total of 1,425 responses were received (Edward Jones: 113, Merrill Lynch: 115, Morgan Stanley: 104, Raymond James: 326, UBS: 252, and Wells Fargo Advisors: 515) and weighted. Brokers rated their current employer across almost 50 factors on a 1-to-10 scale, with 10 representing the highest level of satisfaction. More results from the survey can be found at WealthManagement.com.&nbsp;

An end to the seven-year bull market has sent a minor chill through the ranks of financial advisors working for the nation’s largest brokerage firms, as many report a slightly dimmer view of their employers than they did last year.

REP.’s 25th annual Broker Report Card is the survey that lets advisors from the six major national brokerages rate their employers across a range of factors, from technology and research offerings, to compliance and sales support.

Overall, advisors gave the firms an average approval rating of 8.1, on a scale of one (lowest) to 10 (highest), down from 8.2 last year.

This matters as national brokerage firms compete not only with each other, but with newer business models and support structures that can ease a path to an independent practice. When REP. magazine first began the broker report card in 1990, 56 percent of advisors worked for a national firm; today that number is 15 percent, according to Cerulli.

Yet overall, large full-service firms continue to appeal. 83 percent of advisors said they were very likely to still be employed by their current firm in the next 12 months.

Why? National brokerages are still attractive to clients with money. Advisors reported their average client had $1.34 million in investable assets; almost a third reported a total book of over $200 million in assets, up from one-in-four advisors who hit that mark last year.

Next: Show Me the Money