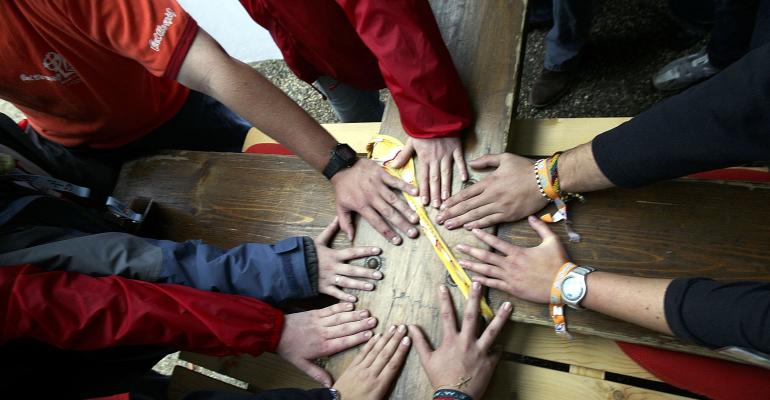 Wealthmanagement.com's annual compensation survey found that one in three advisors work on a team, sharing clients and revenues, compared to the 47 percent of advisors going it alone. About 20 percent say they fall somewhere in the middle, working in a siloed practice but with other advisors, sharing resources and overhead but not clients or revenues.

“The emergence of teams is there. It’s a very significant trend, year after year,” says founder of the Ensemble Practice Philip Palaveev. 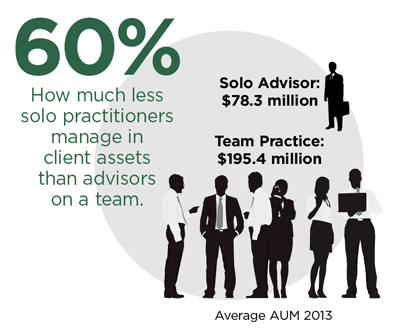 And on the whole, advisors working in teams bring in more money. They reported an average of $923,606 in gross production, versus $561,247 by solo advisors. Moreover, team practices earned a higher take home pay on average, with the survey finding on average, team players earned $253,636 in total compensation last year.

Solo advisors took home an average $247,840 (including fees, commissions, deferred compensation and bonuses). Those advisors sharing the cost of resources, but not clients or revenues, fared the worst, with advisors in a siloed practice earning an average $196,975 in 2013.

The higher compensation is, in part, due to the fact that teams manage more assets and bigger accounts. Advisors on a team managed an average of $195.4 million in client assets last year, compared to solo advisors with $78.3 million in AUM on average.

Team practices also serve bigger clients. According to the survey, the average account size for team practices is $1.3 million, compared to solo advisors, who report their average client account size is less than $500,000. 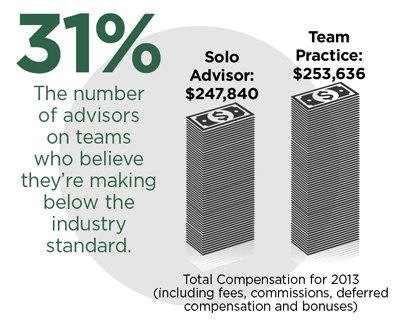 But despite the higher compensation, advisors working on a team are less satisfied. Almost one in three team advisors feel their compensation is below the industry standard (it’s not), compared with the 18 percent of solo advisors who voiced dissatisfaction.

Team advisors also show more caution about the future. Compared with 2013, advisors in a team practice expect their compensation in 2014 to grow by 15 percent, compared to more optimistic solo advisors who predict 17 percent growth.

This may, of course, be a factor of where they sit. Wirehouses and national firms are still the best place to find teams, with one in four advisors working with others. Among RIAs, almost 19 percent work on a team.