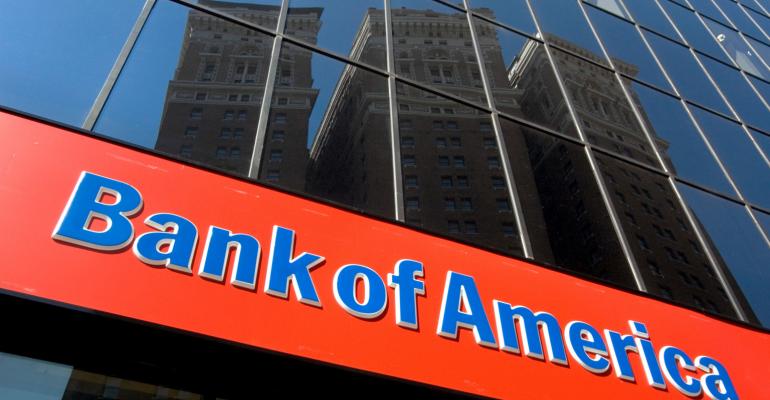 The wealth management sector was a small, bright spot in an overall bleak quarter for Bank of America, with the bank on Wednesday reporting a $276 million loss stemming from legal settlements.

The Charlotte-based bank reported a net loss of $276 million, down significantly from the reported profit of $1.48 billion a year earlier. The loss was largely attributed to the $6 billion litigation expense related to the bank's settlement with the Federal Housing Finance Agency on mortgage securities sold to Fannie Mae and Freddie Mac, what CFO Bruce Thompson referred to as "rulings and settlements around legacy matters."

Overall revenue also took a hit, down 3 percent from last year’s $23.4 billion. Still, the $22.8 billion revenue reported for the first quarter was slightly above the $22.5 billion industry analyst were expecting the bank to report.

Bank of America’s Global Wealth and Investment Management business fared better in the quarter, with net income up one percent to $729 million from $721 million last year. Revenue for the unit also increase, growing to $4.5 billion, a 3 percent increase from a year ago. Client balances also increased to $2.40 trillion, a 7 percent jump driven by higher market levels and net inflows.

Roughly a third of the wealth management division’s revenue came from brokerage transactions, a third from fee-based business and a third from net interest income off deposits.

Within Merrill Lynch, client balances remained steady at $1.9 trillion, but the brokerage reported asset management fees of $1.5 billion, up 21 percent from a year ago.

The wealth management unit’s strong performance can be attributed to increased productivity, as well as the shift to fee-based business and banking, said spokeswoman Susan McCabe.

Most of Merrill’s 13,725 advisors maintain a combination of fee-based and commission-based client relationships. As of March, 45 percent of advisors managed at least half of their client assets using a fee-based model.

The brokerage continued to reduce the size of its advisor force, down by 47 brokers this quarter. The decline was primarily driven by the continued attrition of underperforming trainees within Merrill’s Practice Management Development program. The bank pointed out that advisor losses to other brokerages or independent firms was down 20 percent from the prior quarter.