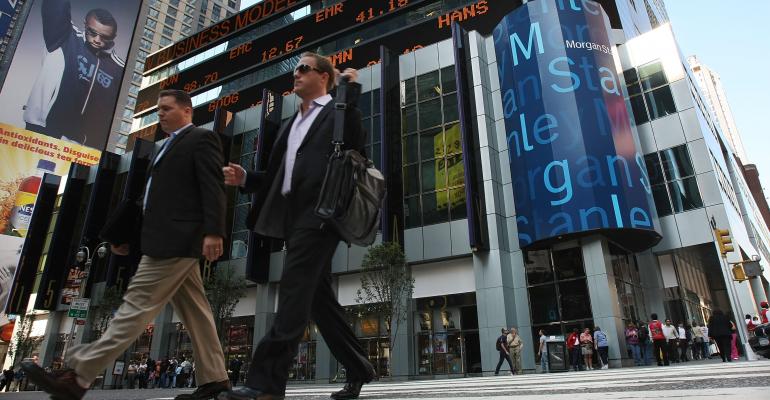 Wealth management’s pre-tax profits were $768 million, up from the $736 million reported a year ago. For the year, the wealth business earned $3.3 billion in pre-tax profits, a record high. Revenues were $3.75 billion for the quarter, down slightly from the $3.8 billion from a year ago. Net revenues for 2015 were $15.1 billion, another record.

“Wealth management and investment management were solid,” CEO James Gorman said in an analyst call Tuesday. He added that he expects to see further growth in profit margin improvements within wealth—which hit 22 percent this year—noting it could hit 23 to 25 percent going forward when retention deals from the Smith Barney deal start to expire in January 2019.

The firm would also like to see higher loan rates among wealth clients to help with boosting margins. Currently only 1.9 percent of wealth management clients have a mortgage loan with Morgan Stanley, Gorman said.

Gorman also took the opportunity Tuesday to extend his thanks and best wishes to exiting head of wealth management, Greg Fleming, while adding that incoming co-heads Shelley O'Connor and Andy Saperstein have the experience needed to move the business forward. "Our bench in wealth management is particularly strong," Gorman said.

Overall, Morgan Stanley took in $908 million, $0.39 a share, in profits for the fourth quarter compared to the loss of $1.6 billion reported a year ago. This beat analysts’ estimates by $0.10, according to Seeking Alpha. But revenues dropped in the fourth quarter to $7.74 billion from the $7.76 billion reported a year ago. When excluding accounting adjustments, revenue was $7.86 billion, beating analysts’ estimates by $310 million.