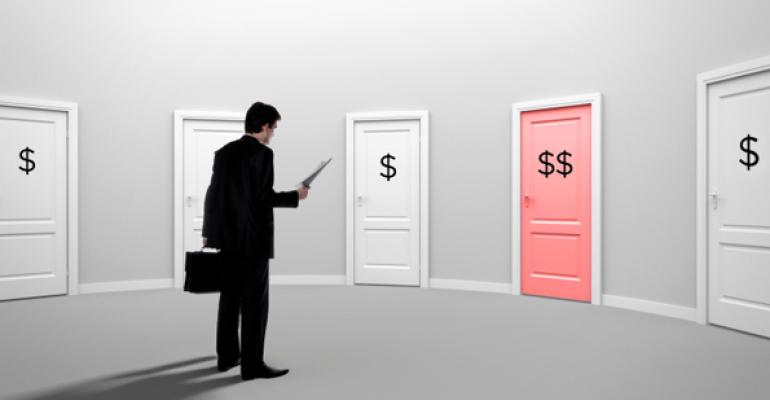 The Economics of Choice

In many cases, the economics of the independent model can be exponentially better than those being touted by the wirehouses today.

With so many independent models launched over the last several years, these advisors can now get the business ownership they seek along with the ability to monetize their businesses. But the economics of an advisor’s business can vary from firm to firm. Here’s how they stack up.

At traditional wirehouse firms and regionals, many advisors who are in growth mode, predominantly fee-based and with a clean compliance record, are seeing deals ranging from 150 percent to 350 percent of trailing 12-months production. These packages are attached to seven to nine-year forgivable loans with up to 150 percent of the total deal being paid upfront. Meanwhile, payouts range from 30-48 percent of the revenues generated. But unless an advisor is in major growth mode, some feel it is impossible to actually earn the full package.

Advisors who are independent-minded but don’t necessarily have the desire to open their own firms, now have options. At HighTower Advisors, for example, advisors have employee status, the ability to leverage a fully built-out infrastructure, and a payout that resembles a wirehouse. Advisors who join HighTower’s partnership model are offered cash in the range of 70-100 percent of trailing 12 months revenue (on a nine-year forgivable loan) and equal amounts of equity in the firm. The bet for these recruits is that in return for significantly less cash upfront, the equity they are granted will be worth multiples more over time than traditional wirehouse packages over time. (Note: HighTower has recently launched two new models – HighTower Alliance and HighTower Network that allow advisors who want to be fully independent – not employees of the HighTower partnership – to leverage the firm’s infrastructure, support and brand without being offered any cash or equity in the transition.)

For the advisor who feels restricted as an employee, has a vision to launch his own brand and wants to build an enterprise of lasting value, an independent broker/dealer or an RIA/hybrid is the route to go. RIA firms that pass transaction costs onto clients keep all of the revenue earned from client fees (about 65 percent after expenses). IBD advisors generally start at a 90 percent payout and net approximately 55 percent after expenses. Although some IBDs offer transition dollars, these advisors are foregoing the short term reward of much more transition money for superior take home economics and their equity in the business. As established entrepreneurs, they can sell their independent businesses on the open market for anywhere between three to seven times EBITDA (Earnings Before Interest, Taxes, Depreciation and Amortization) for those with less than $500 million in AUM and seven to nine times EBITDA for those with more than $500 million.

When the Economics Don’t Make Sense

Take the example of Frank’s team: the corner office business in their market, working for a wirehouse in the Southeast for the last five years. With annual revenue in excess of $7 million and over $1 billion in client assets, Frank and his partner Barbara, have come to realize that they rushed the due diligence process prior to joining; there are many things they originally thought they could do easily for clients that, in fact, they can’t. Further, they cannot market themselves with their distinct brand, are facing increasing bureaucracy, inefficiencies and complaints about technology. Given these conditions, they determined that they owed it to themselves and their clients to find an alternative solution, keeping in mind that they would owe almost $5 million back to the firm—the unforgiven portion of their note.

While other wirehouses offered them transition packages that would pay them $10.5 million in cash up front and a sum total of more than $20 million within four years of their move, they were determined to go independent. They ultimately spoke with Focus Financial Partners, which offered them in excess of 250 percent of trailing 12 months revenue over four years with the potential to earn substantially more based on growth. In addition, Focus pays 20 percent long-term capital gains for the consideration, instead of 40 percent ordinary income tax. While the immediate economics of a move to another wirehouse seem attractive, the team would increase annual take-home pay by about 30 percent going the independent route. Further, the team concluded that they would have much greater growth potential as business owners, and that the total economic package would be worth, in seven years, more than three times the wirehouse package, not including the growth in the value of Focus stock.

While compensation structure and transition economics are key components of any advisor’s decision to move, it’s business mix, personality, professional and personal goals that will ultimately make the choice most obvious.