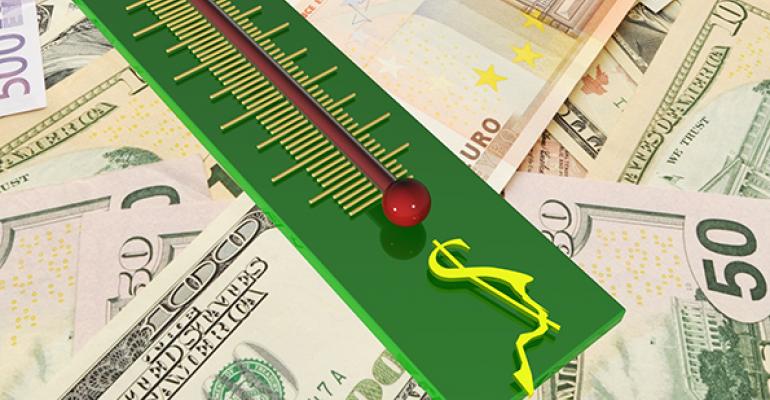 Advisor satisfaction and loyalty has tumbled at national brokerage firms amid heightened concerns over compensation changes and a lack of confidence in leadership.

Overall advisor satisfaction at seven of the national brokerage firms dropped 3 percent over the past year, with firms earning an average score of 701 on a 1,000-point scale in J.D. Power’s second annual advisor satisfaction survey. Comparatively, firms scored an average of 721 in 2014. The survey was based on responses from over 3,300 financial advisors within the employee channel.

Along with decreased levels of satisfaction, the portion of advisors who say they will likely still be at their current firm in two years dropped 6 percentage points (from 89 percent last year to 83 percent in this year’s survey).

While Edward Jones and Raymond James maintained the top two spots, respectively, Wells Fargo Advisors jumped to number four on the 2015 satisfaction index, up from its sixth overall placement last year. Meanwhile UBS and Merrill Lynch slid slightly in their standings this year. UBS went from fourth overall last year to fifth last year, while Merrill Lynch went from fifth to sixth this year. Last year the list included RBC Wealth Management (third highest ranked), but due to insufficient responses from firm advisors, it was not included this year, Foy said. 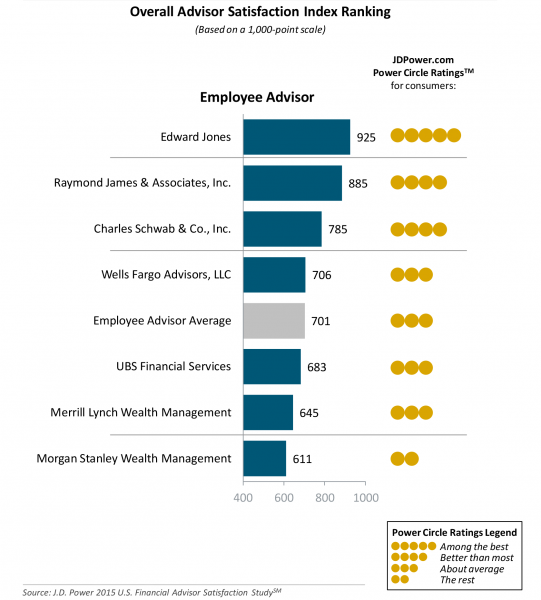 Recent changes in compensation and a lack of confidence in firm leadership seem to be the driving forces behind advisor dissatisfaction, said Michael Foy, director of the wealth management practice at J.D. Power.

“Any time there’s a change to a firm’s comp plan, there is almost always a decrease in advisor satisfaction,” he said. Half of advisors said they experienced a negative change to their payout in the last year, up from the just 41 percent who reported negative impacts in 2014. Additionally, advisors with over $150 million in assets—which firms are most interested in retaining, J.D. Power reports—said they felt more negative impacts than those advisors with less than $50 million.

Meanwhile, about 42 percent of advisors said their firms’ leadership failed to create a strong culture of accountability and noted that effective top-down communication is lacking. Foy noted that there were some exceptions to this lack of confidence among wirehouse firms, citing Wells Fargo Advisors and Raymond James as those scoring comparatively higher on leadership. “Mary Mack is relatively new, but she and her team are getting high marks,” Foy said, adding that advisors' perceptions of the direction of Raymond James’ leadership were equally positive.

"Advisors’ expectations and demands will continue to increase given the relative scarcity of experienced, established advisors," Foy said.

“There are going to be firms that cannot sustain and maintain a culture where people want to remain there. Firms can’t afford to rely solely on short-term retention tactics like contracts and deferred compensation to retain these advisors. They need to build a culture that inspires loyalty.”