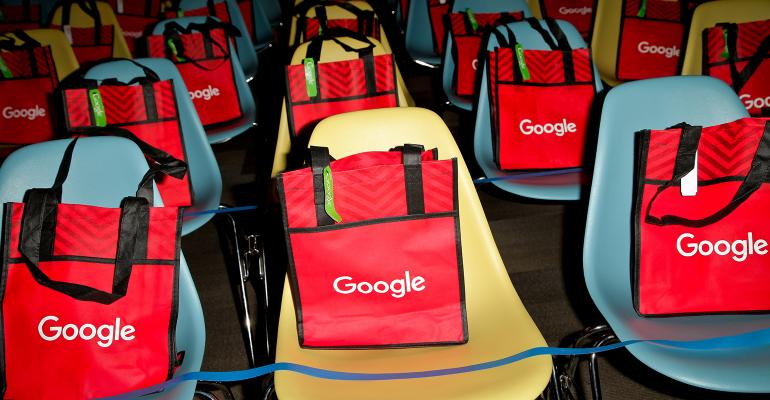 Why Google and Amazon Keep Fidelity and BlackRock Up at Night

Consumers are ready to trust tech giants with financial services, but regulatory hurdles might get in the way.

By Sabrina Willmer and Nishant Kumar

“You are not on track to meet your retirement goal,” replies Amazon.com Inc.’s voice-activated digital assistant, with not a bit of sugar-coating. Then she suggests turning over $76 a month to Fidelity Investments and its advisers.

This won’t actually happen if you try it on your Amazon Alexa device at home. It’s a demonstration put on by EMoney Advisor LLC, a company owned by Fidelity, in its offices in Radnor, Pa. Amazon provides software for third-party developers to experiment with new functions. Fidelity is trying to find ways to apply artificial intelligence, computer algorithms, and voice-­recognition software to the hidebound world of money management and investing.

There’s some urgency to the task. These days, investing firms figure they’ll either master the digital world or become yet another of Silicon Valley’s victims. Each year, Fidelity gathers scores of technologists and executives to confront threats to the 71-year-old business, which manages $2.4 trillion and is one of the world’s biggest mutual fund companies and retirement plan administrators. Like generals and soldiers in a war game, they sketch out what they would do in all kinds of scenarios, such as a market crash or a merger that created a super rival. Just as ominous, perhaps, they ask: What if Amazon distributed financial products or offered its own financial advice? What if Google bought its own money manager?

Those tech companies could then do to the investment industry what they’ve done to businesses from publishing to electronics, squeezing already-shrinking profit margins and driving out established players. Even now, the soaring popularity of ­market-tracking index funds is pushing investment management fees ever closer to nil. “We’re working to innovate so we don’t get caught flat-footed,” says Bill Doyle, head of research for Fidelity Labs, which oversees the company’s experiments in financial technology.

For now there’s one big thing keeping the tech predators at bay: Getting into finance would pull Amazon and its ilk into closely regulated businesses in the U.S. But Fidelity and others see no guarantees this will deter tech companies forever. And beyond U.S. borders, where many financial companies look for growth, tech is already breaking through. In 2013, Chinese e-commerce giant Alibaba Group Holding Ltd. started selling a money-market fund. It is now the world’s largest, with 1.56 trillion renminbi ($235.6 billion).

Customers in the U.S., too, are ready to trust tech companies with their savings. More than half of investors with assets of at least $1 million would consider using one of the top tech companies to manage their wealth, according to a survey by consulting firm Capgemini SE. Three-quarters of millennials would take a flyer on an offering from Google, Amazon, Apple, or payments companies PayPal and Square over one from their own banks, according to a study by media company Viacom Inc. “If Google comes out tomorrow and asks if I want to invest, I probably would,” says Marcus Storr, who heads hedge fund investing at Germany-based Feri Family Trust. The search engine giant, a unit of Alphabet Inc., has data on billions of its users and millions of dollars to splurge on the best coders from around the world, who could automate the search for lucrative trades. U.S. technology firms have already entered finance. Apple customers pay with their phones. Amazon lets customers use its system to buy products on other sites. It offers loans to merchants. “Alexa and Siri could one day become your financial assistant, cutting even deeper into commissions” for advisers, says Lex Sokolin, who directs financial technology strategy at consultancy Autonomous Research. Amazon, Apple and Google—big players in digital assistants—had no comment.

To head off the threat, investment companies are forming partnerships with technology firms. Earlier this year, Boston-based Acadian Asset Management LLC struck a deal so its portfolio managers could use Microsoft Corp.’s Bing Predicts, which makes forecasts using search and social media data, to help pick stocks; that agreement later ended. Barry Benjamin, a PricewaterhouseCoopers partner who oversees money-management consulting, says tech companies may prefer joint ventures to avoid the legal risks of investing. Otherwise, “they really have to bite the bullet and subject themselves to the scrutiny of financial regulation,” Benjamin says. He expects U.S. tech firms might be more likely to focus on Asia and other developing markets.

Money managers are also developing and acquiring technology to keep the loyalty of investment advisers trying to compete in an increasingly automated world. BlackRock, led by chief executive officer Larry Fink, in recent years has been buying stakes in other companies, particularly technology firms. Through these purchases, the company is pushing into new lines of business. In 2013, BlackRock helped seed a startup called Personal Capital Corp., which sells financial software that lets customers budget and track investments. Two years later, BlackRock bought FutureAdvisor Inc., which creates automated investment software. Rob Kapito, president of BlackRock, said that while his firm views the big tech giants as a potential threat, it is unlikely those companies will offer funds because their reputation would take a hit when their clients lose money. “If they have superior technology, we may want to utilize it and bring it into our ecosystem,” says Kapito.

Fidelity bought EMoney in 2015. It sells software to investment advisers that’s designed to make it easier to interact with their customers on budgeting for weddings, college, or retirement. It employs 600 people in an office that looks more like a Silicon Valley startup than a unit of a fund company, with the standard-issue beanbag chairs, huddle rooms, and Segway scooter. “All of us in this industry need to be sort of eyes wide open around disruption,” says EMoney CEO Ed O’Brien.

For now, Alexa, as an adviser, isn’t quite ready to disrupt. For one thing, she still has trouble recognizing you—and that’s a big flaw, because you aren’t just asking her to turn on the lights or the radio. What if a guest in your house accidentally triggers the intimate details of your net worth and retirement plans? Fidelity Labs is working on voice authentication, but it remains a work in progress. So it may be a while before the financial world updates the old 1970s ad slogan: “When Alexa talks, people listen.”