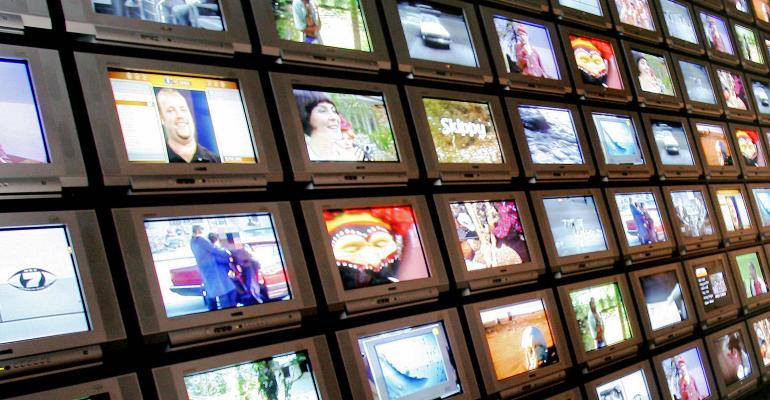 Act Analytics unveils "real-time" ESG ratings for public companies based on news coverage. Our technology columnist takes it for a spin.

Advisors that want to get a glimpse into ESG evaluation of public companies—or who simply want to try an interesting free tool—should explore the News Analytics offering recently made available by ESG data firm Act Analytics.

The tool uses real-time, natural language processing to identify companies in news stories and calculates an ESG ranking based on the information. Under the hood the algorithm is identifying sub-narratives, analyzing grammar, topics and calculating sentiment based on 10 ESG categories. Scores range from 0 to 100, 50 being “neutral.” Any score below 50 is negative, (zero being the most negative) and any score above 50 is positive, 100 being the most positive.

“We think it is a great way to bring ESG down to earth in a way that people are used to interacting with,” said Act Analytics founder and CEO Zachary Dan.

“What comes out in the news is already material (information for investors), and this is a problem that sustainability reporting is going to have to deal with indefinitely,” he said, referring to how news effects people’s perceptions and understanding of a company's activities along enivornmental, social or governance criteria, which, beyond a public company’s own disclosures, should be an additional component factored into an overall ESG rating.

Related: How to Think About the Confusing and Sometimes Contradictory World of ESG Rankings

A quick tour of the tool

On the Act Analytics home page, go to the “product” menu and select “News Analytics.” You will need to provide your name and a valid email address to gain access (if you are not already an Act registered user). Once on and using the free version you will be able to search up to five companies per day and create a watch list of up to 10. You can search using a company’s name or stock symbol.

And down below on the lower right of the screen you can choose which factors to include from among the 10 (all are checked by default).

What you get back is a line chart with points on it (Y axis is the score, X axis time scale), each representing a story. At the top of the screen are the company’s name, ticker, an overall score and an indication of news volume (“very high” for example for companies often in the news), and a momentum indicator (“trending up” for example). Hover over individual points on the line chart and you get the date and generally the headline and a couple of other data points, including the company’s score for that story. Click on the point and it takes you to the story (many will be behind a registration or pay wall).

The default company that comes up right now on the News Analytics page when it opens is Alphabet Inc. (Google), which provides a quick lesson with a high volume of news stories. I included a screen capture of Moderna’s results, which similarly, because of the pandemic and its vaccine development, has been generating a lot of news. Again, each of the dots on the screen represents a story, the higher those dots appear on the Y access the more positive sentiment of the story, while the dark blue line is the overall averaged score for the company. Hence when you see a cluster of more positive stories, generally above the line it tugs the average company score higher, whereas a cluster of more negative stories does the opposite. 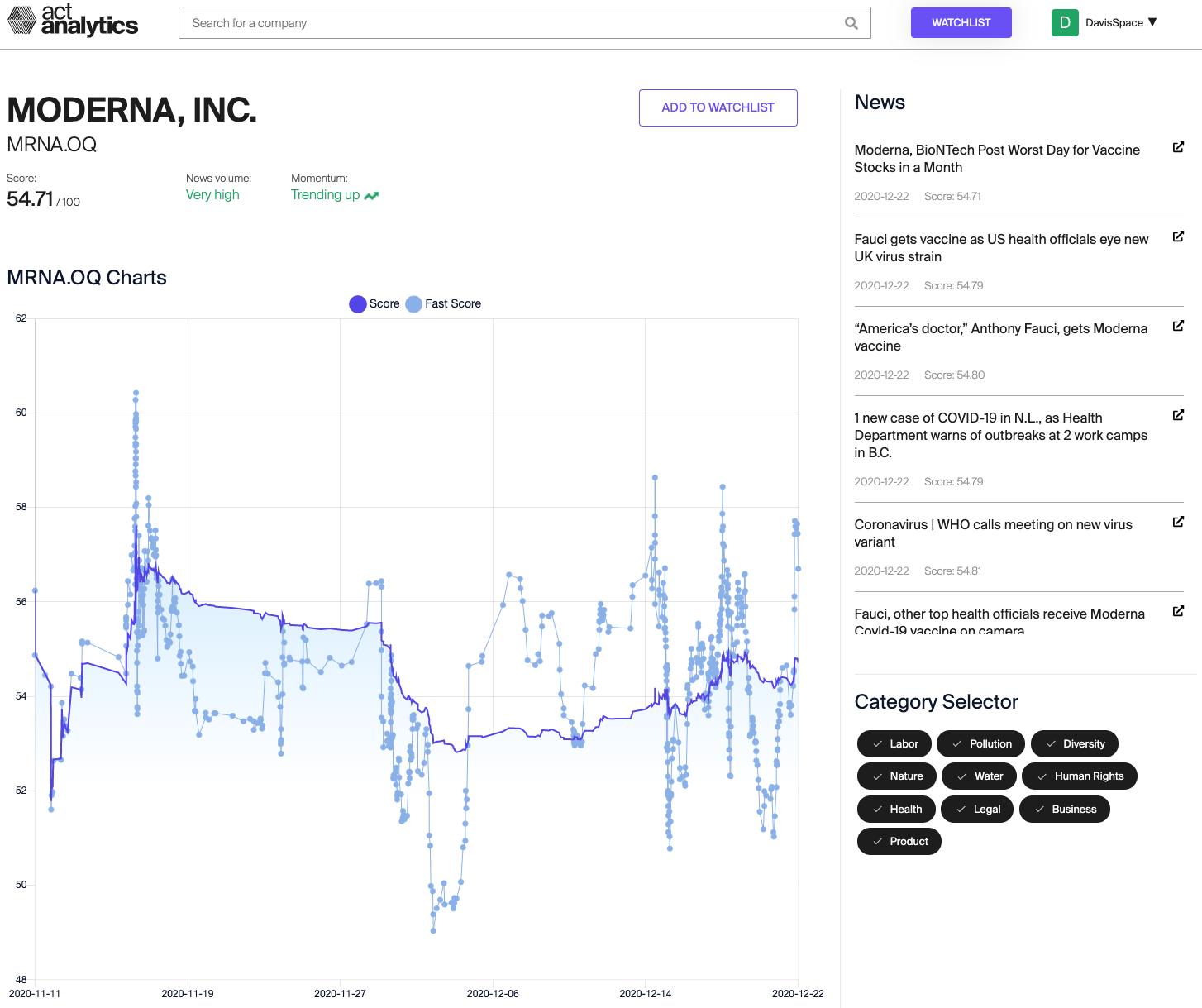 Zeroing in on the Google/Alphabet's chart below, a story on the US government looking into labor issues at the company (along with the many more stories that follow with the same news) received a sentiment score of 47. The stories are reflected in Google's overall score dropping into the 40s. This follows a flurry of more positive feature and product announcements prior to the lawsuit news (where the average company score is up around 55). 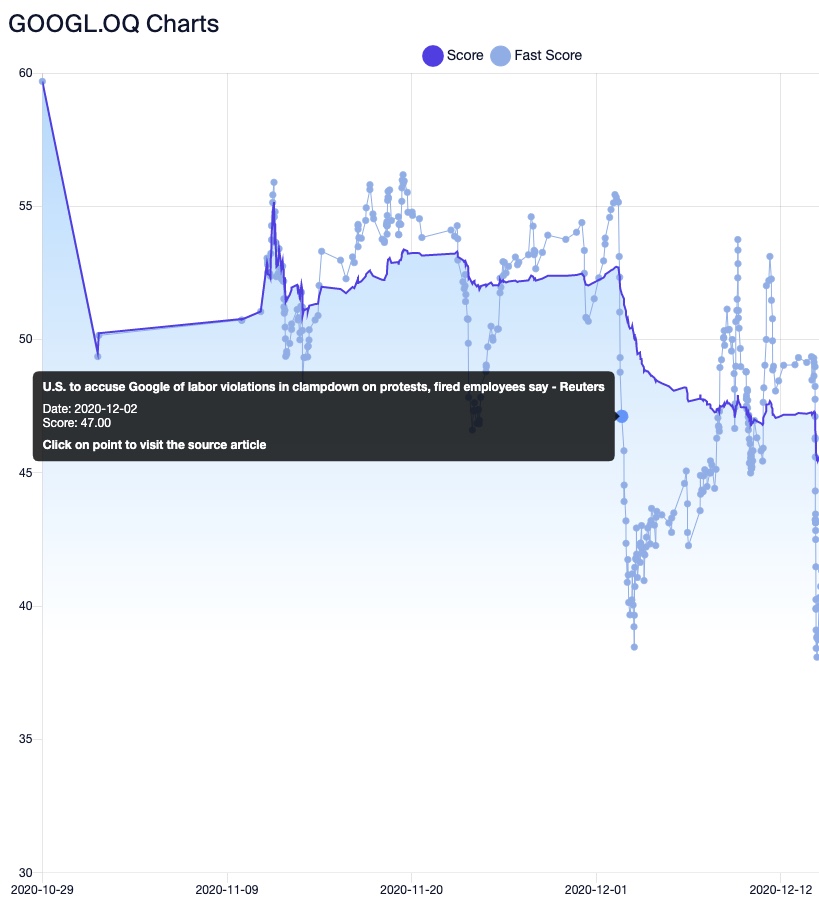 I found similar instances, for example, with Lockheed Martin Corp.'s score dropping due to a government probe following the grounding of some of the company's F-35 fighter planes. Its overall score then rebounded a few days later on a cluster of more positive stories announcing the acquisition of Aerojet Rocketdyne for $4.4 billion. While it's not directly clear how the acquisition nudges the firm in a more positive direction from an ESG perspective, the point of the platform is to aggregate news sentment around a company. (In a follow-up email Dan pointed out to me that mergers and acquisitions stories fall under the governance category and that this happened to be an acquisition story with a positive tone). 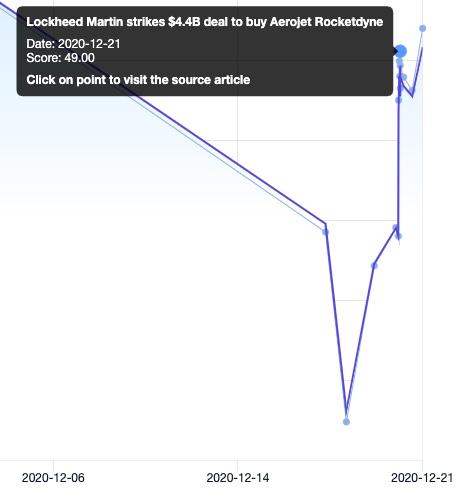 A few things I learned kicking the tires

Having looked at dozens of wealth management platforms, tools and mobile apps over the last decade and being a bit of a space geek, I like to start any review of a tool with a short list of eight companies in the aerospace industry.

Doing so with the News Analytics tool helped me both get a sense of how it worked but also raised some questions. For example, a couple of my test companies did not appear at all or had but a few data points when I searched for them.

Dan explained that the application does not cover a set of companies based on size or sector of the market.

“It's really just, what's in the news,” he said. Some companies do not get a lot of attention in the media, he said. Right now, Act has data on approximately 2500 companies in the system. He also pointed out that ESG news is a subset of all news, “so, we throw a lot out.”

Dan said that he and his team of five developers and engineers welcomes user feedback, for example, users that become aware of niche business news providers whose coverage is missing for specific industries.

Another thing I noticed was the lack of historical data. He said that during six months of beta testing, evaluations, tweaking and improving of how the algorithms worked it made sense to start fresh at a set point in time.

“I intentionally do not backfill: everything in the database is time stamped at time of entry, and this is the strictest policy to protect from look-ahead bias, which can be very subtle.”

Some readers might recall hearing of Act Analytics before. The firm’s main platform for ESG analysis participated in the 2020 season of ScratchWorks.

It was built from the ground up for retail financial advisors and wealth managers to help them have value-based conversations with their clients. It uses a proprietary ESG scoring methodology and algorithm attempts to remove a lot of the complexity found in tools available to advisors. The current cost is $250 per advisor per month.