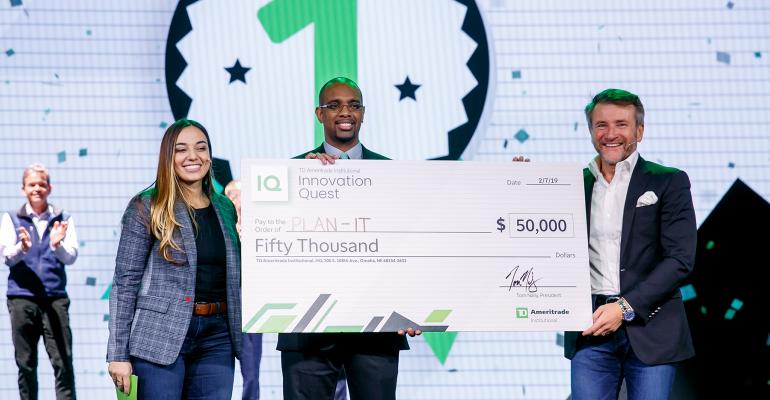 Wesley's idea, a financial literacy app called Plan-It, successfully beat out 135 submissions pitched to a panel of judges at TDAI's National LINC conference that included Robert Herjavec, founder of Herjavec Group and one of the “sharks” on the TV series Shark Tank. Also weighing in on the decision was an audience of roughly 2,000 advisors.

Plan-It earned high enough marks from the judges that it beat out finalist pitches from Emotomy, which showcased its risk assessment tool designed to indicate when a client might be at risk of leaving an advisor, and Dynamic Wealth Solutions, which presented RIA Genie, a digital administrative assistant designed for wealth managers. All three finalists each received $25,000 from TD Ameritrade Institutional, with Plan-It receiving an additional $25,000.

Plan-It is built around the idea of both adults and children becoming more financially literate through interactions with the app. In the pitch presented to the judges, Wesley described a situation where a child wanted a new toy (a financial goal) and the app suggested a way the child could get enough money to buy the toy (a cash flow strategy). After the child earns enough money, the app is able to find a cheaper way to buy the toy, saving the child money on the purchase and investing the savings into the stock market. Wesley suggested the app could be a way for TD Ameritrade Institutional to build a brand presence with young consumers, establishing trust with the firm—while simultaneously teaching financial concepts—at a young age.

There were some concerns among conference attendees that the intellectual property of contestants would pass to TDAI through their participation in the competition. Confusion about ownership of IP may have caused potential participants to think twice about entering the contest, but those concerns were unfounded, said Jon Patullo, managing director of institutional technology solutions at TD Ameritrade Institutional.

“There’s no strings attached,” he said. The goal of the competition was to “get some great ideas. ... If we want to help invest to build things out, we can do that. But [contestants] own the intellectual capital.”

With $50,000 in winnings, Plan-It will move from concept to development. Wesley, a reading teacher, is open to partnerships with school districts, youth development groups and, naturally, TD Ameritrade Institutional. TDAI was eager to see the proof-of-concept fleshed out, too.

“We’re excited to see Plan-It come to life,” said Jim Dario, managing director of product management at the firm. “Each finalist challenged us to think differently about how RIAs can serve their clients.”